22 Unbelievable Places that are Hard to Believe Really Exist 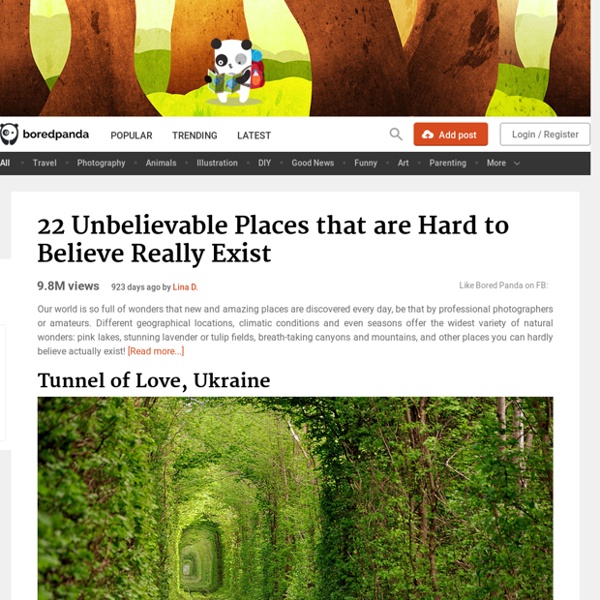 Our world is so full of wonders that new and amazing places are discovered every day, be that by professional photographers or amateurs. Different geographical locations, climatic conditions and even seasons offer the widest variety of natural wonders: pink lakes, stunning lavender or tulip fields, breath-taking canyons and mountains, and other places you can hardly believe actually exist! [Read more...] Some of the pictures in this collection will be of all natural sights you can find while traveling around the world, while the others have experienced human interference – but even in these cases, the result of such collaboration is spectacular. The Japanese learned how to tame thousands of orchids and form a romantic tunnel out of them; another one was formed all the way in Ukraine by a passing train; and what eventually ends up as hot tea in our mugs, first grows in stunning tree fields in Asia. Feel free to add more places in the comments under the article. Tunnel of Love, Ukraine

The 16 Reasons You Need To Drop Everything And Travel Right Now There’s a characteristic of our generation that can only be described as severe restlessness. I am not specifically referring to the number of friends you have who are prescribed Adderall; although that’s definitely another cultural trend I could discuss in length. What I’m talking about is a restlessness of the soul, the wandering spirit, a culture of nomads. We’ve been bred on this notion that we are going to do it differently than our parents; we’ll be adventurous, experience life to the fullest. We’ve sat over lunch with our friends choosing our post-graduation plans, always teetering over the line of what we knew as the safe choice and what we knew as the adventurous, spirited one.

The 9 most drop-dead gorgeous bays of the Albania’s Ionian coast - Albania Are you looking for some intimate virgin beaches where you can spend some quiet vacations? We offer you a list of 8 most beautiful bays of the Ionian coast. You will find here not only spectacular views and some of the best beaches, but also the peace you are searching for. 1. Luxury Furniture, Property, Travel & Interior Design The luxury Dhigu Resort, Maldives Anantara Dhigu Resort & Spa is encircled by mystic lagoons and unspoilt crystal shores, the resort is a heavenly sanctuary on a secluded paradise island, offering barefoot elegance in one of the world’s most celebrated tropical havens. Here the sparkling turquoise waters of the Indian Ocean offer an endless horizon of aquatic allure and the evocative location is matched by a tranquil island design style. Anantara Dhigu is a luxurious five-star resort hidden on tropical terrain on Dhigufinolhu Island in the Maldives’ South Male Atoll, a mere 35 minute speedboat journey from the island nation’s international airport, or a scenic five minutes by private chartered seaplane. Male-based architect Mohamed Shafeeq from Group X Design Associates and Thailand-based interior design company, Abacus, headed by John Lightbody, have styled the resort’s distinctive environment as a creative complement to the natural beauty of the island.

Rio Olympics 2016: Artist JR honors a Sudanese athlete who's missing the Olympics, with a towering mural in Rio — Quartz “The goal of Olympism is to place sport at the service of the harmonious development of humankind, with a view to promoting a peaceful society concerned with the preservation of human dignity,” reads one of the fundamental principles of Olympism (pdf, p.13), also known as the philosophy of the Olympic games. Time and again, the Olympic games have served to reflect and even amplify this spirit. It has allowed people to represent their countries—even if they weren’t officially recognized by their neighbors or members of the United Nations. This year Kosovo, still officially part of Serbia, will make its Olympic debut with eight athletes after the IOC recognized its bid for independent status. Chinese Taipei, a nation more traditionally known as Taiwan, will participate in Rio with 59 athletes under a cloud of controversy. Palestine, which has been a member of the International Olympic Committee (IOC) since 1995, is bringing six athletes to Brazil.

Places to see at least once in life They say there are places in this world that anyone should see them at least once in life. Although we want each of you to go see them live, and we offer in the form of photos below. If I had to redo the path for real, the steps you would wear in Norway in Greece, Iceland, Netherlands, Croatia, China and Bora Bora. Whether it will attract the ocean or dream of green forests and endless, fascinating places of the world is waiting to delight. And who knows how many are still undiscovered? Preachers Rock, Preikestolen, Norway The Mohawks Who Built Manhattan (Photos) For generations, Mohawk Indians have left their reservations in or near Canada to raise skyscrapers in the heart of New York City. High atop a New York University building one bright September day, Mohawk ironworkers were just setting some steel when the head of the crew heard a big rumble to the north. Suddenly a jet roared overhead, barely 50 feet from the crane they were using to set the steel girders in place. “I looked up and I could see the rivets on the plane, I could read the serial numbers it was so low, and I thought ‘What is he doing going down Broadway?’” recalls the crew’s leader, Dick Oddo.

Hidden Beach in Marieta Islands, Mexico Located in the Marieta Islands, about 20 nautical miles from Puerto Vallarta, lies an idyllic beach paradise hidden underneath a hole in the ground. Called the “Hidden Beach” or “Playa de Amor” (Beach of Love), this one-of-a-kind natural wonder has remained untouched by human hands for many years. Within its natural cavernous shell, crystal-clear turquoise waters peacefully lap against its powdery white shores, out of sight and out of reach from the rest of the world. Mohawk Ironworkers “Top Off” the new One World Trade Center. For more than a century, Mohawk ironworkers have helped shape New York City’s famous skyline. They built them in the early 70s, they were there to pick up the pieces when terrorists knocked them down during 9/11, and they were there to top off the newest tower in 2013. Following in the footsteps of their fathers and grandfathers, a new generation of Mohawk iron workers descended upon the World Trade Center site, helping shape the most distinct feature of Lower Manhattan, the same iconic structure some of their fathers and grandfathers helped erect 40 years ago and later dismantled after it was destroyed in 2001. Once again, ironworkers from Kahnawake and Akwesasne helped put the finishing touch, an antenna piece, on top of the new World Trade Center, the Freedom Tower, in New York City. These men of steel worked at an incredible pace in order for the One World Trade Center to rise a floor a week. “I worked on the building for four years,” said McGowan.

Zythophile I dunno, you wait hundreds of years for a herb-flavoured beer, and then two come along at once. Just coincidence, I’m sure, but two new beers (ales, strictly), from the Pilot brewery in Leith, Scotland, and the Ilkley brewery in Yorkshire, have been announced this week that go back to the pre-hop tradition of flavouring your drink with whatever herbs and plants you could find in the local fields, hedgerows and woods, or up on the local moors. I’m delighted to see them, because I love herb-flavoured ales. I have just one worry, as a historian.

françois beaurain animates everyday life in liberia 2 clicks trust me, look aug 23, 2016 françois beaurain animates everyday life in liberia since 2014, françois beaurain has been artistically animating the lively streets of monrovia — the capital city of liberia. through an ongoing series series of short, looping gifs, beaurain immortalizes the people met and places visited while wandering through the coastal region. typical scenes of street life are imagined in perpetual motion, repeating the often mundane, yet mesmerizing actions of the citizens in endless loops. beaurain uses a variety of architectural and urban settings as a backdrop — the ducor hotel, a now abandoned, but once five-star luxury accommodation; the former mount coffee hydropower plant; a few of the city’s countless evangelical churches; and beaches inhabited by fishing communities, located a few kilometers outside of monrovia. nina azzarello I designboom

Happy to see these beautiful places, enjoy it! by topoletta Aug 26