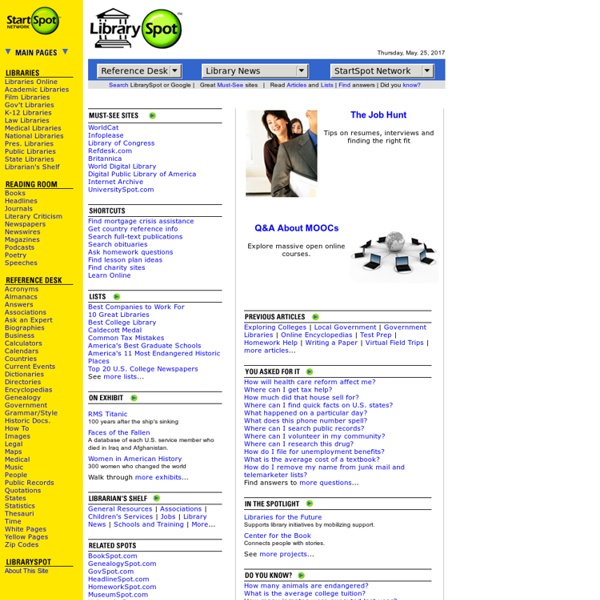 Related:  vivekyadav • Librarian • All About Books

About SirsiDynix Ingenuity wasn't born overnight. For more than 30 years, libraries have used SirsiDynix technologies to bring the power of their collections to their communities. Our story began when Northwestern University developed a system to automate its library card catalogs in the 1960s. Since then, we have been a committed partner to libraries around the world, employing technology that allows librarians to do more than just keep track of their collection. Today, more than 23,000 library facilities in more than 70 countries use our products and services to bring the power of knowledge and information to 300 million users worldwide.

Murderpedia Murder of Shirley Duguay In 1994, Shirley Duguay of Prince Edward Island, Canada went missing and was later found dead in a shallow grave. Among the most compelling pieces of evidence in the case was a leather jacket covered in Duguay's blood and over two dozen white feline hairs. Royal Canadian Mounted Police investigators recalled that during a previous interview with the estranged husband, Douglas Beamish, that he had a white cat of which he named Snowball. Directories - Libraries Digital Librarian: a librarian's choice of the best of the Web Directories: Libraries See Also: Librariana

4 Kindle Search Box Commands Only Pro Users Know - eReader Palace To facilitate debugging, many software will hide some command codes that need to be turned on in a special way, such as the Horizon ↑ ↑ ↓ ↓ ← → ← → B A ,Chrome’s can turns on lab functionality, and so on. What you may not know is that our popular e-reader, Kindle, also hides a number of system commands that can be invoked by typing in the search box. The minority has organized a few more practical commands for you in here, welcome to continue reading. Reset reading speed When we read an e-book, the Kindle automatically counts data such as page turning frequency, and estimates the remaining reading time of the chapter in the lower left corner to facilitate planning in advance. But sometimes we put Kindle on the side to do something else that will lose the reference value.