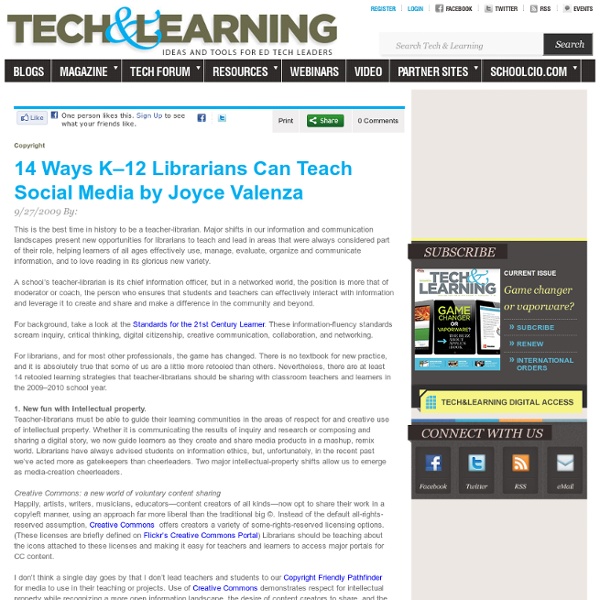 Mobile Learning in Higher Education Viewpoint Mobile Learning in Higher Education Multiple connections in customized learning spaces The term "Nomadic" has been used to describe the current college students' culture of wireless and mobile connectedness in the sense that they are not "rooted" but incredibility flexible and fluid when it comes to their social connections and their virtual life culture. Bryan Alexander, in his article, Going Nomadic: Mobile Learning in Higher Education (2004) says, "More broadly, mobile and wireless computing has altered the rhythms of social time and has changed uses of social space." Whether you choose as a professor to exclude the connectivity from your classroom or to include it, there exits the potential of creating learning communities with broader impact than ever before possible and this can bring wonderful enhancement to any course of study or academic field.

The Librarian Who Doesn't Say Shhh! How Social Media Has Changed Us Mike Laurie works at London agency Made by Many where he helps design social digital stuff. You follow him on Twitter @mikelaurie. Over the last 10 years, we've seen social media galvanize thousands over politics, create as many industries as it has destroyed, and offer an abundance of visual and audio entertainment. But has all this incredible change actually changed us, or just the world we live in? Below are some areas in which social media has had lasting, and arguably permanent effects on the ways in which we live. The question is, are these changes all for the better? Child Literacy It stands to reason that children who read and write more are better at reading and writing. Ambient Intimacy Lisa Reichelt, a user experience consultant in London coined the very pleasant term "ambient intimacy." Consider the many communications technologies through history — the telephone, Morse code, semaphore, carrier pigeons, smoke signals — they are all fairly inconvenient and labor intensive.

The Library Voice digiteen - Digital Etiquette 1 . Overview Digital etiquette, or netiquette as its sometimes called, is a basic set of rules you should follow in order to make the internet better for others, and better for you. 2. The internet can be a powerful tool when it comes to circulating opinion or information. 3. Techdirt did a study that showed that many people purposely responded to emails late at work, because replying to quickly implies that they do not have enough work to do. IM and SMS messages are most subject to misinterpretation, but other communications are less obscure. This are the results from a serve been asked to 10 teenagers. 4. Netiquette The following information came from tech.blorge.com. 1.

The Unquiet Librarian Teens with more screen time have lower-quality relationships Teens who spend more time watching television or using computers appear to have poorer relationships with their parents and peers, according to a report in the March issue of Archives of Pediatrics & Adolescent Medicine, one of the JAMA/Archives journals. Over the past 20 years, teens have used an ever-expanding array of screen-based tools for communication and entertainment, according to background information in the article. "The availability and attractiveness of screen time activities has provoked excitement about the opportunities afforded by these options, as well as concern about whether these displace other activities that are important for health and development," the authors write. Rosalina Richards, Ph.D., of the University of Otago, Dunedin, New Zealand, and colleagues studied 3,043 adolescents age 14 to 15 in 2004. The researchers also assessed interview responses from 976 individuals who were age 15 years in 1987 to 1988.

Makerspace Resources and Programming ideas | Create, Collaborate, Innovate (Updated post from my Podbean Site) Summer 2014 I was asked to present a webinar to Ohio School Librarians for InfOhio. The recording is available here. I also created a resource list (adapted from a collaborative presentation with LISD librarian, Leah Mann) and year long programming ideas that I will continue to update on this page. WEBINAR RECORDING: Invent to Learn by Sylvia Martinez and Gary StagerScript Changers: Digital Storytelling with Scratch by Kylie PepplerSoft Circuits by Kylie PepplerShort Circuits by Kylie PepplerArt of Tinkering by Karen Wilkinson and Mike PetrichMakerspace Playbook by Maker MediaWorlds of Making by Laura Fleming Diana Rendina has a great post and pinterest board on this topic! Good for Upper ES- HS Good for Lower ES Makedo Kit: Build anything with cardboard (smash this with Hummingbird robotics to build cool stuff!) from kodokids.comlibrary mobile mag wall and play podium9Colleen GravesSXSWedu *What if I can’t get it all? Maze Game Challenge:

Faux Friendship - The Chronicle Review - The Chronicle of Higher William Deresiewicz discusses the shaky future of friendship on New Hampshire Public Radio's Word of Mouth Wednesday, December 16 at 12:40 p.m. Listen to the episode here. "…[a] numberless multitude of people, of whom no one was close, no one was distant. …"—War and Peace "Families are gone, and friends are going the same way."—In Treatment We live at a time when friendship has become both all and nothing at all. Yet what, in our brave new mediated world, is friendship becoming? How did we come to this pass? The rise of Christianity put the classical ideal in eclipse. The classical notion of friendship was revived, along with other ancient modes of feeling, by the Renaissance. Classical friendship, now called romantic friendship, persisted through the 18th and 19th centuries, giving us the great friendships of Goethe and Schiller, Byron and Shelley, Emerson and Thoreau. Add to this the growth of democracy, an ideology of universal equality and inter-involvement.