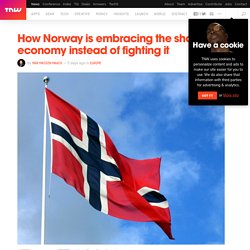 Norway, however, is an exception and is leading the charge in figuring out how to preserve the flexibility of this model, while mandating certain labor and quality standards. This week, a commission appointed by the Norwegian government handed in its recommendations for how Norway could make way for the sharing economy through taxation and deregulation. The first step would be to change the legal status of Uber drivers so that they will be as legitimate as regular taxi drivers are now, according to reporting by Norwegian publication Aftenposten. The commission believes that companies like Uber can open up the Norwegian taxi industry and bring much-needed competition to the sector. EPRS BRI(2015)568345 EN. Taxing the sharing economy - Tax. By John Steveni Since we lived in caves, humans have shared our time and property with others. 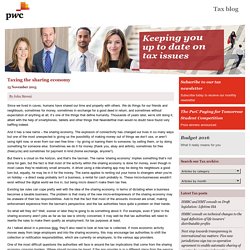 We do things for our friends and neighbours, sometimes for money, sometimes in exchange for a good deed in return, and sometimes without expectation of anything at all; it’s one of the things that define humanity. Thousands of years later, we’re still doing it, albeit with the help of smartphones, tablets and other things that Neanderthal man would no doubt have found very baffling indeed. Insight - Key indirect tax issues in the sharing economy. Digital intermediaries are entirely dependent for their success on the services that third parties offer via their platforms, i.e., the peer-to-peer lenders. 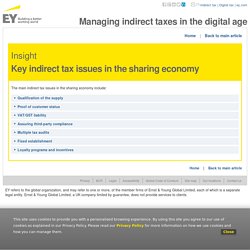 Due to their disruptive business models and visible public presence, the activities of digital intermediaries are hotly debated in news media in many countries. Hence, from a commercial perspective, effectively digital intermediaries are forced to ascertain that the parties that they are connecting are acting in compliance with the law. From a VAT/GST perspective this generally means that these parties must be registered for VAT/GST, issue invoices, charge VAT/GST, file reports and pay VAT/GST collected to the authorities. The sharing economy – sizing the revenue opportunity.

The Sharing Economy and the Tax Code Don't Get Along. The “sharing economy” has brought us trendy and useful new services such as Uber, Lyft and Airbnb that have made waves in their industries. 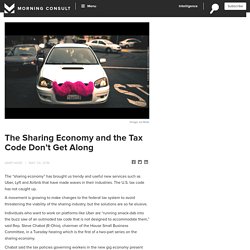 The U.S. tax code has not caught up. A movement is growing to make changes to the federal tax system to avoid threatening the viability of the sharing industry, but the solutions are so far elusive. Individuals who want to work on platforms like Uber are “running smack-dab into the buzz saw of an outmoded tax code that is not designed to accommodate them,” said Rep. Taxation and Sharing Economy - Thomson Reuters Tax & Accounting. What Governments Can Learn From Airbnb And the Sharing Economy. Arun Sundararajan is a professor of business at New York University. 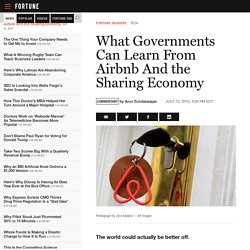 This excerpt is from his new book, The Sharing Economy, which published in June 2016. A potential guest recently sued online home rental service Airbnb over allegations of racial discrimination by some of its hosts. While the company has since reiterated its commitment to rooting out racial bias, including hiring a former ACLU head to oversee its efforts, the case highlights a broader set of societal challenges we will face as the sharing economy expands into new services..

In my new book, The Sharing Economy, I discuss how platforms like Airbnb and Lyft blur the lines between our personal and professional lives, creating gray areas for business owners, consumers and governments. Deutsche Bank Thinks Draghi’s Gone Over to the ‘Dark Side’ Grim mutterings about European Central Bank policy can probably be heard echoing around the skyscrapers of Frankfurt's financial district on any given day: Low interest rates, tough supervision, no bonds left out there to buy, etcetera. 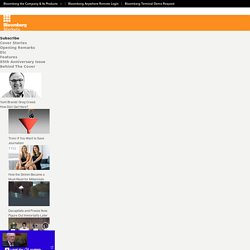 David Folkerts-Landau, chief economist of Deutsche Bank AG has taken those concerns to a whole new level, and has just published an excoriating attack on ECB policy. The research note is entitled “The Dark Sides of QE.” A European agenda for the collaborative economy. These new business models can make an important contribution to jobs and growth in the European Union, if encouraged and developed in a responsible manner. 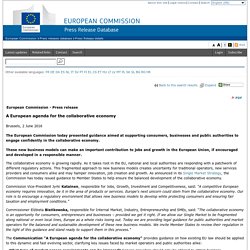 The collaborative economy is growing rapidly. As it takes root in the EU, national and local authorities are responding with a patchwork of different regulatory actions. This fragmented approach to new business models creates uncertainty for traditional operators, new services providers and consumers alike and may hamper innovation, job creation and growth. As announced in its Single Market Strategy, the Commission has today issued guidance to Member States to help ensure the balanced development of the collaborative economy. Challenges of Taxing the Sharing Economy. Pwc taxing the sharing economy.