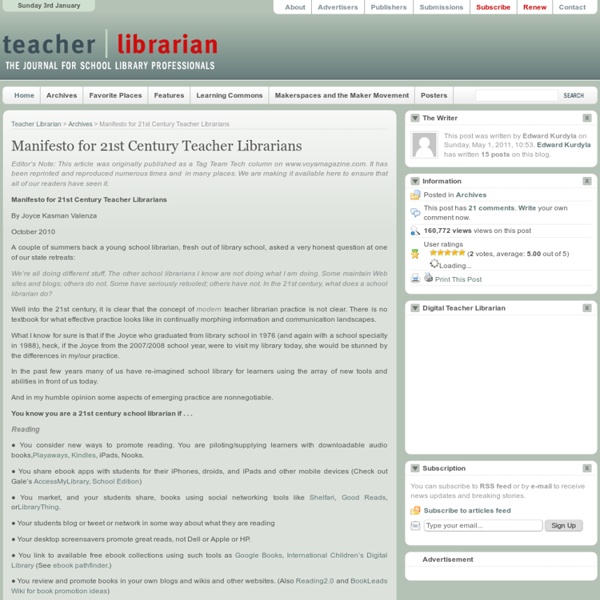 Editor’s Note: This article was originally published as a Tag Team Tech column on www.voyamagazine.com. It has been reprinted and reproduced numerous times and in many places. We are making it available here to ensure that all of our readers have seen it. Manifesto for 21st Century Teacher Librarians By Joyce Kasman Valenza October 2010 A couple of summers back a young school librarian, fresh out of library school, asked a very honest question at one of our state retreats: We’re all doing different stuff. Well into the 21st century, it is clear that the concept of modern teacher librarian practice is not clear. What I know for sure is that if the Joyce who graduated from library school in 1976 (and again with a school specialty in 1988), heck, if the Joyce from the 2007/2008 school year, were to visit my library today, she would be stunned by the differences in my/our practice. And in my humble opinion some aspects of emerging practice are nonnegotiable. Reading Information Landscape 1. 2. 1.

SC Study Shows Link Between School Librarians and Higher Test Scores The members of the South Carolina Association of School Librarians (SCASL) have always known how important school librarians and library programs are to student achievement in their state; however, they needed a way to prove it to administrators, teachers, parents, and legislators who were yet to be convinced. To develop their case, in 2013, the SCASL board commissioned a study conducted by Keith Curry Lance, consulting with RSL Research Group president Marcia J. Rodney and vice president Bill Schwarz. The group had previously conducted 17 school library impact studies in 14 states.

Online referencing generator Access to information has never been easier for students as traditional print resources are supplemented with information from a plethora of World Wide Web sources. However, the ease of information access has developed a 'cut-and-paste' mentality to research, resulting in a rise in plagiarism among the student population. In order to minimise this problem, students need to be aware of the importance of acknowledging sources and, in particular, the conventions of referencing. This in itself can be problematic as teachers and teacher librarians often struggle to offer advice on referencing the ever-growing range of information sources.

Thing 31: Evidence Based Practice – Getting Started If school librarians can’t prove they make a difference, they may cease to exist.(Ross Todd – The Evidence-Based Manifesto for School Librarians SLJ, 2008) This first lesson in our latest Cool Tools track was inspired by conversations that started at a recent workshop by Jennifer LaGarde on annual reports and collecting data. ACRL Report Shows Compelling Evidence of Library Contributions to Student Learning and Success A new report issued by ACRL, “Documented Library Contributions to Student Learning and Success: Building Evidence with Team-Based Assessment in Action Campus Projects,” shows compelling evidence for library contributions to student learning and success. The report focuses on dozens of projects conducted as part of the program Assessment in Action: Academic Libraries and Student Success (AiA) by teams that participated in the second year of the program, from April 2014 to June 2015. Synthesizing more than 60 individual project reports (fully searchable online) and using past findings from projects completed during the first year of the AiA program as context, the report identifies strong evidence of the positive contributions of academic libraries to student learning and success in four key areas: Students benefit from library instruction in their initial coursework. Join a free ACRL Presents live webcast to hear more from the report authors on Monday, May 9, from 1:00 — 2:00 p.m.

How libraries can guide people through the maze of information available in the digital age Erin Berman is innovations manager for the San Jose Public Library, a Prototype Fund winner in the first Knight News Challenge on Libraries. Below, she writes about opportunities worth exploring in the second Knight News Challenge on Libraries, which is now open for entries. The challenge asks, How might libraries serve 21st century information needs?

Teachers in school libraries - what does the data tell us? Each year, the Wednesday of Library and Information Week is synonymous with National Simultaneous Storytime (NSS) – a time when schools, libraries and playgroups across Australia stop to share the same book at the same time. Hats off to the Australian Library and Information Association (ALIA) for choosing Jol and Kate Temple’s I Got This Hat, illustrated by Jon Foye for NSS 2016. It is a big week for school libraries with the announcement of the Children’s Book Council of Australia (CBCA) Shortlist last Friday. The shortlist containing the top Australian children’s books published in the past year forms the basis of reading activities in schools leading up to Children’s Book Week in August. This year's theme of Australia! Best practices in school library website design In order to build a good, usable website for your school library, you need to think in two very different ways. First, you need to think like a librarian. What do your patrons need, and how can you best serve them? Since you all do this for a living, that should be the easy part.

How the School Library Helps Build Strong Blended Classes by David Olson, courtesty of The Journal White Bear Lake Area High School - South Campus (MN) is in its third of year of offering a variety of hybrid or blended classes from economics to health/physical education. This suburban St. Paul school of 11th and 12th graders is committed to providing blended in-class and independent study.