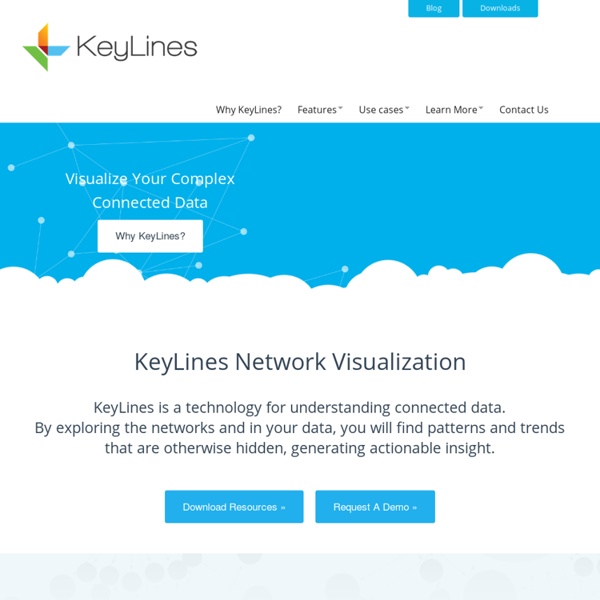 NodeXL: Network Overview, Discovery and Exploration for Excel - Home If you’re disappointed with big data, you’re not paying attention There has been a backlash lately against big data. From O’Reilly Media to the New Yorker, from Nassim Taleb to Kate Crawford, everyone is treating big data like a piñata. Gartner has dropped it into the “trough of disillusionment.” It might be provocative to call into question one of the hottest tech movements in generations, but it’s not really fair. Correlation versus causation versus “what’s good enough for the job” One of the biggest complaints — or, in some cases, proposed facts — about big data is that is relies more on correlation than causation in order to find its vaunted insights. Honestly, for song or product recommendations, who really cares? But in areas like medicine, finance and even marketing, people are becoming much more concerned with finding out “why” once they’ve found out “what.” Or if you’re a retail store, knowing that Mac users who visit your site tend to buy more-expensive products might make you want to show them more-expensive products.

Parallel Sets Parallel Sets (ParSets) is a visualization application for categorical data, like census and survey data, inventory, and many other kinds of data that can be summed up in a cross-tabulation. ParSets provide a simple, interactive way to explore and analyze such data. Even though the screenshots here show the Mac version, the program also runs on Windows and Linux. Basic Operation To open an existing dataset, select it in the list and either double-click it or click the Open button. The horizontal bars in the visualization show the absolute frequency of how often each category occurred: in this example, the top line shows the distribution between the passenger classes on the Titanic and the crew. The middle dimension shows a male to female ratio of almost 4 to 1. Between the dimension bars are ribbons that connect categories and split up. Interaction Move your mouse over the display to see the tooltip telling you more about the data. Downloading Online Data Sets Importing Your Own Data

6 Great Interactive Data Visualization Tools (Part 2) Welcome back for the second part of my series on interactive data visualization (dataviz) tools. In part one, we covered three cool tools for visualizing charts and graphs and many other data types on a webpage. In part two, we take a look at three more tools that are a bit more complex but have some incredible data visualization capabilities. 4. Exhibit is a very robust and customizable offering. Visualization Types Supported: Line Graphs, Maps, Scatter Plots, Multi-Filterable Lists, Timelines, Timeplots and more…with widgets! Flexible & Powerful Approach to Design I really like the approach of Exhibit, where data is presented through a "lens" – an HTML template shell that elements are placed into. Steep Learning Curve Like the other more complex libraries, there is more coding involved with Exhibit than most options, and having previous Javascript experience is definitely very helpful. 5. Javascript InfoVis Toolkit is a nice suite of tools for creating charts and graphs on a webpage.

Fineo UPDATE: the project is no longer supported, since it’s part of RawGraphs. Check it out here: rawgraphs.io. Fineo is a web application which implements a visualization technique based on the visual model of Sankey diagrams. Fineo was born from the idea that Sankey diagrams, although developed as a technique for visualizing continuous data, may be used to represent relations between dimensions of categorical data. Introduction Categorical data representation is crucial for interpreting many real world phenomena. Moreover, to be able to make sense a multidimensional dataset, an interactive approach is strongly needed so that the user will be able to filter and relate only the information he is interested into. Sankey Diagrams Sankey diagrams are flow diagrams that represent flows of continuous data such as money, energy or material in a system. We have chosen to conceptually base Fineo on sankey diagrams for three main reasons: Fineo and ParSets Fineo, instead, is much more network-like.

Business Intelligence and user adoption: A Depp-esc disaster? We’ve said it for a long time. In fact, we wrote a blog about it almost two years ago – What’s the Key Metric for Measuring BI Performance? The answer? “Simple – The rate of end-user adoption. That is, how many people in an organization who have access to BI software, actually use that software, and access the reports it generates, on a regular basis, to help them make operational and strategic business decisions.” And, much like the enduring partnership between Tim Burton and Johnny Depp – although their latest collaborative effort (Dark Shadows) received a dismal 42 percent rating on Rotten Tomatoes and had the LA Times wondering “has America fallen out of love with Johnny Depp?” Like our apparent overexposure to Burton and Depp’s quirky explorations of society’s social fringes, the necessity of BI user adoption is a message seemingly disregarded by an unreceptive audience – vendors and implementers alike. Research and advisory firms try again… Now back to that Aberdeen report… i. i. i.

Infomous Infomous is a revolutionary way to explore online content visually. Add Infomous on your site to engage readers, increase circulation and generate revenues. Create an Infomous cloud with your content and embed it on your site. See How to Embed Infomous Visualize any Text as a Network - Textexture