Beyond the Bullet Points: It is Time to Stop Trying to Save Libraries 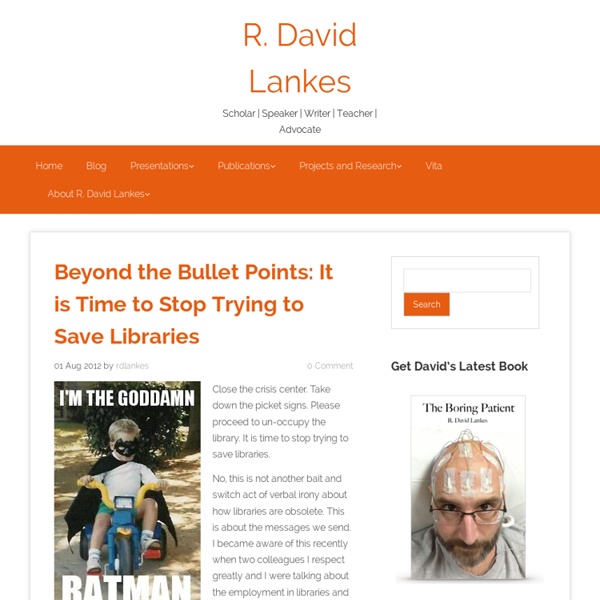 Close the crisis center. Take down the picket signs. Please proceed to un-occupy the library. It is time to stop trying to save libraries. No, this is not another bait and switch act of verbal irony about how libraries are obsolete. Where did they get the idea that libraries are sinking? This messaging is insidious. “Best Days of Librarianship are Ahead of Us We are the Right Profession, Uniquely Positioned to Lead in the Knowledge Age However, We won’t get there Following Current Trends and with our Current Focus on ‘Recorded Knowledge’ and Buildings” It looks initially as a nice little uplifting piece of fluff, but it is really an implied threat. We must take on Google (or be like Google, or build our own Google) to save libraries! We must be on Facebook (Twitter, Tumblr, Pinterest, MySpace, Geocities) to save libraries! Screw that! To be sure libraries need more funding, they need modernization, they need a shifted identity in the minds of our communities. Find a thriving library.

Digital Storyboarding | Drinking from the Fire Hose To prepare for my second observation as a student librarian at New Canaan High School, I am collaborating with Susan Steidl (English teacher with a senior film and literature class) to create a digital storyboarding lesson. Ms. Steidl’s class just finished watching Psycho, directed by Alfred Hitchcock. Many critics rank Hitchcock as one of the best directors of suspense in cinematic history. Watching the film will show students the many techniques used by Hitchcock to influence the audience’s viewing experience. After watching Psycho, students will read A Tell Tale Heart by Edgar Allan Poe and The Lamb to the Slaughter by Roald Dahl. Digital Storyboarding Technology from Dan Ambrosio on Vimeo. Like this: Like Loading...

Thank you VAASL! I was honored to keynote the Virginia School Library Association's fall conference. My presentation follows George C. Marshall Foundation. We had a great conversation over lunch about using Wikipedia as a resource to teach website evaluation. Friday's dinner banquet was delightful. I was surprised to learn that only one attendee had participated in an edCamp.

Why the Amish Population Is Exploding - Neighborhoods The Amish—known for their horse-and-buggy way of life—may seem like they would be overwhelmed by the rushing changes in technology and culture. But according to a new census, the Amish are growing faster than ever. There are nearly 251,000 Amish people in America and Canada, according to Ohio State University researchers. That's more than double the estimated population in 1989 of about 100,000. Researchers estimate the population will double again to half a million within about 21 years. Much of the growth has to do with the fact that more Amish children are staying with the religion and starting their own high-fertility families. The Amish live in small groups of 20 or 30 families known as settlements, and Donnermeyer's team has shown the number of these settlements to be growing quickly. As the number of settlements has grown, so has their geographic reach. But the strongest growth is on the east coast. But it's not just lower prices causing this geographic scattering.