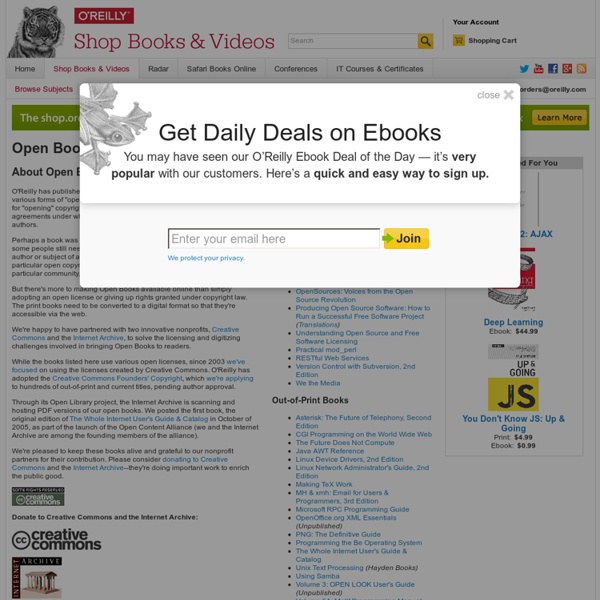 O'Reilly has published a number of Open Books--books with various forms of "open" copyright--over the years. The reasons for "opening" copyright, as well as the specific license agreements under which they are opened, are as varied as our authors. Perhaps a book was outdated enough to be put out of print, yet some people still needed the information it covered. Or the author or subject of a book felt strongly that it should be published under a particular open copyright. Maybe the book was written collectively by a particular community, as in the case of our Community Press books. But there's more to making Open Books available online than simply adopting an open license or giving up rights granted under copyright law. We're happy to have partnered with two innovative nonprofits, Creative Commons and the Internet Archive, to solve the licensing and digitizing challenges involved in bringing Open Books to readers. Donate to Creative Commons and the Internet Archive:

Open Book Project Problem Solving with Algorithms and Data Structures using Python by Brad Miller and David Ranum, Luther College (as remixed by Jeffrey Elkner) CS Principles: Big Ideas in Programming by Mark Guzdial and Barbara Ericson Hands-on introductory computer programming using Python 3. How to Think Like a Computer Scientist: Learning with Python 100+ Sites to Download All Sorts of Things These days you can find all sorts of things online, from audio books to flash files, from sound effects to CSS templates. Below we compiled a list with over 100 download sites that serve that purpose. We will also try to keep the list updated, so if your favorite download site is not here, let us know about it with a comment. Audio Books Librivox: One of the most popular audio libraries on the web. Open Source Textbooks - IAE-Pedia Introduction We are all used to the idea of free public lending libraries. Benjamin Franklin helped to get this idea started in the United States well over 200 years ago. Moreover, the idea of free public schools for all is well accepted. Thus, it is not too great a leap to have a vision of education and educational materials being made available free to people of all ages throughout the world.

OSWINS - Engineering Content: web sites , electrical , mechanical , chemical and civil engineering Engineering software includes analysis and design tools, such as finite element methods and graphical display of results. More engineering tools are available in mathematics , graphics , geology , chemistry and physics . Quotes "Scientists investigate that which already is; Engineers create that which has never been." - Albert Einstein The Online Books Page Examples: Entering austen, jane in the Author field finds books by Jane Austen. Entering Baum in the Author field and and oz in the Title field finds L. Frank Baum's Oz books. Entering dosto in the Author field, choosing the Exact start of name option, and entering underground in the Title field finds Fyodor Dostoyevsky's Notes from the Underground, even if you don't remember how to spell more than the start of the author's name! (Hey, we've changed the spelling in our own database at least once.)

Free textbooks From WikiEducator A book shelf project. This is a starter page for the Free Textbooks group that came together during the iCommons Summit in Dubrovnik, Croatia in June 2007. The group's focus is on developing free textbooks (also by using public domain books and other other materials). We seek both to find ways to work together and also to find best practices when working apart. Blog: 100 Websites You Should Know and Use Entertainment Meet David Peterson, who developed Dothraki for Game of Thrones There are seven different words in Dothraki for striking another person with a sword. Among them: “hliziﬁkh,” a wild but powerful strike; “hrakkarikh,”a quick and accurate strike; and “gezrikh,” a fake-out or decoy strike. But you won’t find these words in George R.