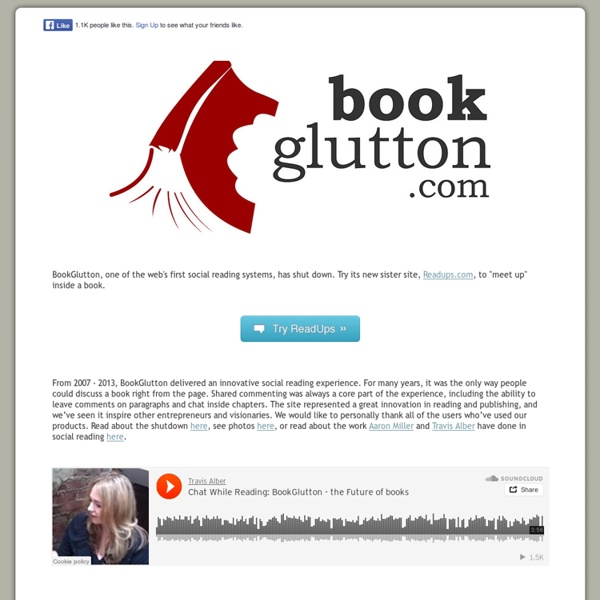 BookGlutton, one of the web's first social reading systems, has shut down. Try its new sister site, Readups.com, to "meet up" inside a book. From 2007 - 2013, BookGlutton delivered an innovative social reading experience. For many years, it was the only way people could discuss a book right from the page. Shared commenting was always a core part of the experience, including the ability to leave comments on paragraphs and chat inside chapters. The site represented a great innovation in reading and publishing, and we’ve seen it inspire other entrepreneurs and visionaries.

Donald Barthelme’s Syllabus There was a time when I fought against an impatience with reading, concealing, with partisanship, the fissures in my education. I confused difficulty with duplicity, and that which didn’t come easily, I often scorned. Then, in my last year of college in Gainesville, Florida, I was given secondhand a list of eighty-one books, the recommendations of Donald Barthelme to his students. Barthelme’s only guidance, passed on by Padgett Powell, one of Barthelme’s former students at the University of Houston and my teacher at the time, was to attack the books “in no particular order, just read them,” which is exactly what I, in my confident illiteracy, resolved to do. But first I had to find the books, a search that began at Gainesville’s Friends of the Library warehouse book sale.

Either Commit Suicide or Start Giggling: An Interview with Andrei Codrescu Interview by Sophie Erskine. 3:AM: Andrei, thanks so much for agreeing to answer my questions. I hope they won’t be too stupid. 25 sources of free public domain books This is an updated list of sites that offer free public domain books in electronic and audio format. Every year new publications enter public domain. That means their intellectual property rights have expired or are not applicable any longer. The content of these works becomes available for public use. Anyone is free to use it – but also to reuse it, for instance publish a new edition.

25 Important Books of the 00s I decided, in the slew of retrospective ‘best of’ lists chronicling the decade we will be putting to rest in the next weeks, that even though I’m not the biggest fan of lists that try to span even a year, much less 10 of them, I might as well put something together. Of all the lists I’ve seen so far there hasn’t been a single one that came near anything remotely representing the kind of words I like to read, many of them repeating the same names by the same people in the same spots. And that’s fine and good, okay, I guess. Recipes for the hot days Wow. When I first decided to host an event, I convinced myself that I'd be satisfied with even ten entries. Never in a million years would I have expected 64 of you to participate! (That's right, we had three late-comers, but I'm a softie like that...)

40th Anniversary: The New York Books Canon New York is a hypertextualized city. By 6 a.m., our commuters have smudged more words off their papers than most cities read all day. How to even begin identifying a canon? The Rumpus Interview With David Shields David Shields, author of three novels and seven works of nonfiction, attempts to demolish the foundations of literature in his latest, Reality Hunger: A Manifesto. His target: the culture. He argues that there has been a dreadful trend in fiction, and not just genre fiction and the mass-market best seller, but within the entire literary spectrum. Stories using too much detail, too much description, stories within stories within stories deviating and dwelling in obscure tangents and conventional formula. David took time off from his busy schedule to meet in Wallingford, a neighborhood just west of the University of Washington overlooking Lake Union and the Seattle skyline.

To Be or Not to Be? by Brendan Kiley - Features - The Stranger, Seattle&#039;s Only Newspaper + Enlarge this Image KING COUNTY SUICIDE DEATHS by Age Group 2008 SUICIDE METHODS in King County 2008 Last summer, a University of Washington parking-lot attendant hanged himself from the side of a campus garage while setting himself on fire. The flames burned through the cord, dropping him into the alley below, where he died of two simultaneous causes—burning and falling. The same day somewhere else in King County, a man who'd hanged himself in his bathroom nine years earlier finally succumbed to anoxic encephalopathy and died: a time- delayed suicide.

old pro Thing the first: I've got a great book, I can tell it's great, I know it is, I know it would suck me in and I'd be unable to sleep until I finished (which would be a few nights, because this sucker is big). Marnie, it's been compared favorably to 2666. If you're interested, check out the Amazon reviews here. The original book is written in Hungarian and it's just recently been translated.