N O D E. A few months ago I made version 2 of the Handheld Linux Terminal, a pocket-sized linux computer, which a lot of you seemed to like. 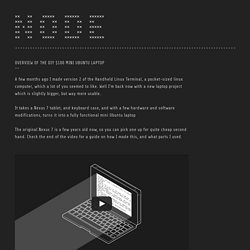 Well I’m back now with a new laptop project which is slightly bigger, but way more usable. It takes a Nexus 7 tablet, and keyboard case, and with a few hardware and software modifications, turns it into a fully functional mini Ubuntu laptop The original Nexus 7 is a few years old now, so you can pick one up for quite cheap second hand. Check the end of the video for a guide on how I made this, and what parts I used. 1.2GHz Quad-core ARM CPU1GB RAM7" 1280x800 TouchscreenWifiBluetoothGPSNFCUbuntu OS booting nativelyQWERTY KeyboardBuilt in speakers/mic/camera1 Full size USB port4325mAh battery This laptop is about as big as an A5-sized book, and it strikes a good balance between being small, and still being very usable. The whole thing easily fits in one hand, and weighs about 900g. I also added a front panel to simplify the overall design. What do you think? 2-Part Tutorial on Building a Dash Cam with Raspberry Pi, JavaScript. By PubNub Staff Follow @pubnub Dash cams have become very popular in the last few years. 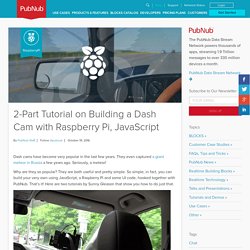 They even captured a giant meteor in Russia a few years ago. GitHub - craic/pi_power: Power management for portable Raspberry Pi projects. DIY Raspberry Pi Zero Handheld Game Console (Part 1) Fun With RFID and NFC. Playing with RFID and NFC is definitely fun, and they are everywhere! 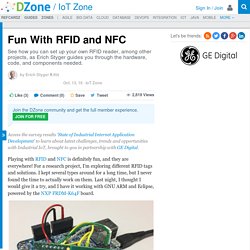 For a research project, I’m exploring different RFID tags and solutions. I kept several types around for a long time, but I never found the time to actually work on them. Last night, I thought I would give it a try, and I have it working with GNU ARM and Eclipse, powered by the NXP FRDM-K64F board. NXP NFC PN7120S with an FRDM-K64F Board I had the NXP kit (PN7120 NFC Controller SBC Kit, OM5577/PN7120S) available, which came with adapter boards for BeagleBone and Raspberry Pi: PN7120 NFC Controller SBC Kit OM5577 PN7120S There is another version of that kit for Arduino (see but I was not able to order that one.

There were several articles and tutorials available, but they didn't all work out-of-the-box for a variety of reasons. Materials In this tutorial, I’m using the following: The projects and sources are posted on GitHub: PN7120 block diagram Hardware Connections OM5577 schematics NFC Controller Board Top Side Software Pins. Gadgetronicx - Electronics circuit diagrams and Embedded Programming. BASICS OF ROBOTICS – A Doorstep to the Robotic World. Building My $1,200 Hackintosh. The Build When you build a Hackintosh (or any custom PC) you need to actually build the machine, which means getting a ton of boxes delivered to your door from Amazon, taking every one out of the package, and then assembling the computer from scratch. 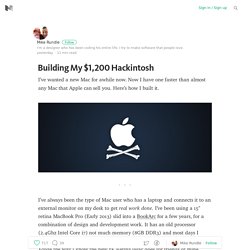 Before this build, I had only assembled one other computer, and that was back in the early 2000s as part of a college networking class. Things have definitely changed: some things are much easier, some things are more complex. Fortunately, there is now a website called YouTube where people walkthrough how to build a computer, and you can watch them do it and learn how to do it yourself. Incredible, right? I watched a number of videos of people putting a Hackintosh together, from boxes to finished build, and I think that’s basically the best way to learn how to do it and to feel confident in what you can accomplish. 3D CAD/CAM Software for Product Design. Build your own 6502 Microprocessor Kit. 6502 Microprocessor Kit Wichit Sirichote, kswichit@kmitl.ac.th Build a single board microcomputer with 6502 CPU. 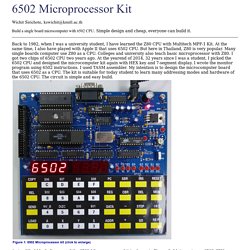 Simple design and cheap, everyone can build it. Back to 1982, when I was a university student, I have learned the Z80 CPU with Multitech MPF-1 Kit. At the same time, I also have played with Apple II that uses 6502 CPU. But here in Thailand, Z80 is very popular. Sam's Laser FAQ - Preface, Introduction, What is a Laser?, Safety. Release notes 0.16 - FreeCAD Documentation. FreeCAD 0.16 was released on 18. 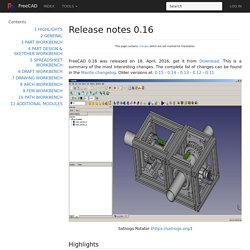 April, 2016, get it from Download. This is a summary of the most interesting changes. The complete list of changes can be found in the Mantis changelog. Older versions at: 0.15 - 0.14 - 0.13 - 0.12 - 0.11 Satnogs Rotator ( Highlights Expression support has been introduced, which allows to define formula relationships between properties of objects. Sketcher solver behavior has been majorly improved.