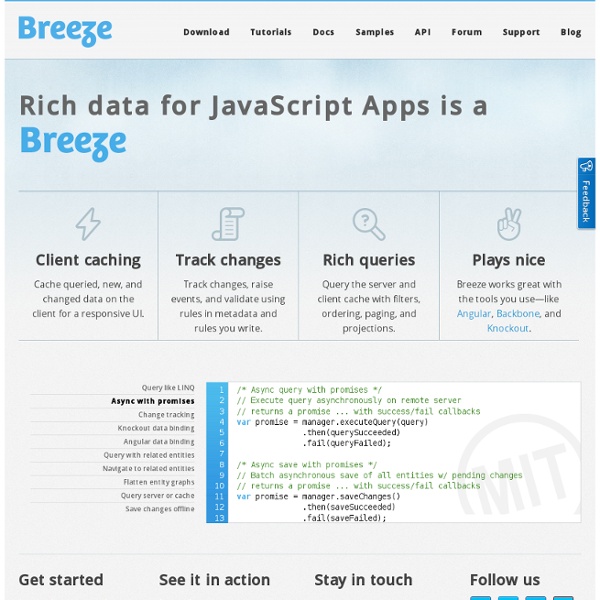 csvfix - CSVfix is a tool for manipulating CSV data News: As Google has disabled the ability to provide binary downloads here, and as I want to do a release of CSVfix 1.6 in the not too distant future, I'm in the process of moving this site to Bitbucket. The source code and the manual are already there, and I hope to transfer all other content in the next few days (neilb, 12/04/2014) The Problem If you have any dealings at all with data and databases, then you almost certainly will have have to deal with comma-separated values (CSV) data. Unfortunately, the CSV files you are given, or are required to produce, never seem to be in quite the right format for your particular business application. And because of the structure of CSV records, using standard text processing tools like sed, awk and perl on CSV files is not as simple as it might be. The Solution CSVfix is a command-line tool specifically designed to deal with CSV data. The CSVfix manual, detailing all commands, is here.

Yeoman - Modern workflows for modern webapps Top 10 Apps: Web-based Task Managers I’ve been jumping from app to app, for as long as I can remember, in search of the best web-based task management app. I’ve never really been satisfied until recently when I discovered Flow. Finding the perfect task manager is a little like searching for a unicorn — it’s just not going to happen. Hopefully our list of the 10 best web-based task management apps will help in your search, if you haven’t already found yours. Note: I’ve ordered these according to my personal preferences and experiences but your mileage may vary. 1. Producteev In my quest for the perfect task manager, Producteev stood out as being one of the absolute best, without a doubt. Producteev isn’t just fantastic for the individual, it’s built for teams too. Pricing Producteev Pricing 2. Flow If you’re a fan of Mac-style interface designs, Flow will likely appeal to you. Flow has an elegance, simplicity and seamless functionality about it that just gets me. It’s not cheap, but some may find its worth the price. 3. 4. 5.

EaselJS | A Javascript library that makes working with the HTML5 Canvas element easy. Recent Updates Follow @CreateJS November 2014 Updates in preparation for next release (coming soon).New class model, with big performance increases October 2014 Lots of bug fixes and pull requests.New 'Extras' folder in GitHub with useful tools and classes July 2014 Major overhaul of Graphics to include a useful command pattern, and a big performance increase.Added Graphics.store() / unstore() The Story Why we built EaselJS About EaselJS EaselJS provides straight forward solutions for working with rich graphics and interactivity with HTML5 Canvas. Featured Projects Community Show & Tell. Ion Drift A port of the Flash game Ion Drift, b10b was able to build a CreateJS version in less than a day that hit target framerates on even the lowest devices, and outperformed ports to other libraries. By b10b b10b

Atmosphere/atmosphere Cookies vs Tokens. Getting auth right with Angular.JS Introduction There are basically two different ways of implementing server side authentication for apps with a frontend and an API: The most adopted one, is Cookie-Based Authentication (you can find an example here) that uses server side cookies to authenticate the user on every request.A newer approach, Token-Based Authentication, relies on a signed token that is sent to the server on each request. Token based vs. The following diagram explains how both of these methods work. What are the benefits of using a token-based approach? Cross-domain / CORS: cookies + CORS don't play well across different domains. What's JSON Web Token? Asuming you have a node.js app, below you can find the components of this architecture. Server Side Let's start by installing express-jwt and jsonwebtoken: $ npm install express-jwt jsonwebtoken Configure the express middleware to protect every call to /api. The angular app will perform a POST through AJAX with the user's credentials: Angular Side What's next? Bottom Line

A suite of Javascript libraries and tools designed for working with HTML5 Recent Updates Follow @CreateJS November 2014 Added Unit Tests to EaselJSUpdates in preparation for new releases (coming soon). October 2014 Added 'Extras' to EaselJSTons of updates and pull requests in all libs July 2014 Major Updates to EaselJS Graphics The Story Why we built CreateJS About CreateJS CreateJS is a suite of modular libraries and tools which work together to enable rich interactive content on open web technologies via HTML5. Featured Projects Community Show & Tell. Ion Drift A port of the Flash game Ion Drift, b10b was able to build a CreateJS version in less than a day that hit target framerates on even the lowest devices, and outperformed ports to other libraries. By b10b b10b

Jason Dobry : Building large apps with AngularJS New to AngularJS? Confused by directive mumbo-jumbo? Giddy over Angular's magic and your new productivity? Check out my presentation on building large apps with AngularJS Whatever your experience with Angular and whatever size of project you're working on, there will come a day when you encounter Angular in the wild being used on a large project. If you have needed to: Organize your filesName your filesLazy-load your codeSerialize application state to the URLDerive application state from the URLManage a Model layerDo smart cachingWork with a RESTful interface (for real)Use a 3rd-party lib with Angular Then you've already met the beast. Angular is not the framework to end all frameworks, however, never before have I derived so much pleasure from web development. My first few weeks with AngularJS I was like a kid on Christmas morning, unwrapping presents as fast as I could and running around showing everybody. In regard to convention, AngularJS is a little on the light side. $scope. $scope. or

dat-gui - A lightweight controller library for JavaScript. A lightweight graphical user interface for changing variables in JavaScript. Get started with dat.GUI by reading the tutorial at Packaged Builds The easiest way to use dat.GUI in your code is by using the built source at build/dat.gui.min.js. These built JavaScript files bundle all the necessary dependencies to run dat.GUI. In your head tag, include the following code: Using dat.GUI with require.js Internally, dat.GUI uses require.js to handle dependency management. Then, in path/to/main.js: require([ 'path/to/gui/module/GUI'], function(GUI) { // No namespace necessary var gui = new GUI(); Directory Contents build: Concatenated source code. src: Modular code in require.js format. Building your own dat.GUI In the terminal, enter the following: $ cd utils$ node build_gui.js This will create a namespaced, unminified build of dat.GUI at build/dat.gui.js Change log Migrated from GitHub to Google Code. Thanks

AngularJS ngAnimate: Tutorial - How to make Animations with AngularJS Aura: Responsive Done Easy Aura aids you in building out your media queries, be them from tv, print, screen, anything really. There are three pieces to Aura’s Media Query API: the respond-to mixin, the $breakpoints variable, and the media-query mixin. Each will help you write your media queries in their own way. Each method will produce media queries that will bubble out just like a hand written media query. Media Query Mixin A simple and elegant solution not wanting to write out the whole media query syntax every time. To use the Media Query mixin, call the mixin with the values you want. with your selectors and properties within the curly braces. If you wanted a min-width tv query at 30em, you would write: You can also pass a list into the media query mixin with options in the order of Size, Operator, and Query, and that will work too, so you could do something like: Breakpoint Variable and the Respond-To Mixin But, you say, what if I want to define custom breakpoints?

Susy: Responsive grids for Compass All Susy3 API functions draw on the same shorthand syntax, which consists of two parts, seperated by the word of. The first part describes a grid-spanwidth, location (if needed), and spread (in any order): // <width> at <location><spread> $span: span(2);$span-spread: span(3 wide); // location is only needed with asymmetrical grids $span-location-spread: span(3 at 2 narrow); The second half describes the grid-contextcolumns, container-spread, and gutters in any order: // of <columns><container-spread> set-gutters <gutters> $of-columns: of 6;$of-columns-spread: of 12 wide;$of-columns-gutters: of 12 set-gutters 2em; There are two primary functions, span and gutter, which can be used anywhere you need to calculate grid math. span accepts the full shorthand syntaxgutter only uses the second half (with or without of) Except for span-width and location, all of those settings have global defaults, which can be set in the $susy configuration map: