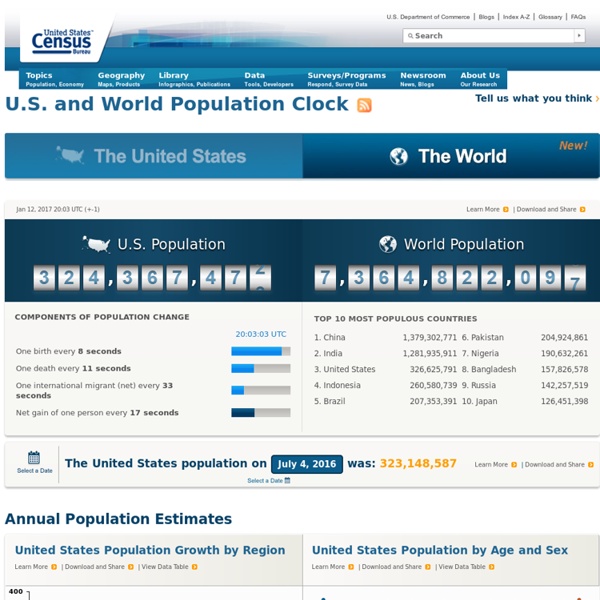 World Population Clock This page will only work with a graphical browser implementing Javascript 3.0 or higher. It fairly accurately clocks the current population and reflects its growth using a second-order approximation of the exponential; in addition, if you enter a date in any form Javascript will accept and hit the "Do this time" button, it will use its magic formula to estimate the population for any date from 1900 to 2100, although the estimates become unreliable outside the range 1950 to 2050. Use the "Un/Freeze" button to "freeze" the clock at a certain time while it is ticking, or to resume it ticking with the present population after you have frozen it or asked for an estimate. Those familiar with the earlier version will note that the range in which the new version gives reasonable estimates has increased considerably.

The Ultimate Weights-Free Workout: The Body It may trouble you to learn that the gym is not the best place to get the ideal male body. Most health clubs are based around the idea that you want to target and isolate individual muscles for enlargement. If an exercise puts you on a machine, chair, or bench, it probably isolates muscle. If a workout promises bigger biceps or pecs, it probably isolates muscle. Muscles were designed to work together in groups. Bodies that are built up by isolating muscles look asymmetrical and clumsy.

By 2060, this country will have the world's largest population In the 1950s the world looked very different. Data from the United Nations shows that the global population was around 2.5 billion. Today, that number is almost 7.5 billion and is expected to rise to 9.7 billion by 2050. In the middle of the 20th Century, China was home to 500 million people and, like today, it was the world’s the most populous nation, followed by India and the United States. But, based on current trends, the list of the world's most populous nations could look very different by 2060. A closer look at communities thriving in unexpected places In Caracas, the capital of Venezuela, nearly 70 percent of the population lives in slums that appear to drape like silk over every hill of the city. Iwan Baan: Ingenious homes in unexpected placesIwan Baan is not as interested in what architects build as he is in the beautiful ways that people appropriate the spaces once the planners are gone. In today’s talk, Baan — whose breathtaking image of lower Manhattan after Hurricane Sandy hangs on at least one of our walls — shows incredible images from communities thriving in ways that seem quite opposite to the uniformity of suburbs. First, Baan takes us to Chandigarh, India, where people inhabit buildings created by modernist architects Le Corbusier in very different ways than expected.

The World's Population Might Not Be About Numbers After All In a world with limited resources, we have to conserve what we have and reduce the number of people on the planet—at least, that’s what most of us believe. But is this true? That’s the provocative question raised by the new documentary Misconception. The film, which premieres at the Tribeca Film Festival on April 20, gives us a personal look at the social and political ramifications of population growth. Oscar-winning director Jessica Yu (best documentary short subject) began exploring the issue of population growth while making her previous documentary, Last Call at the Oasis, which is about the global water crisis.

The human microbiome: Me, myself, us WHAT’S a man? Or, indeed, a woman? Biologically, the answer might seem obvious. A human being is an individual who has grown from a fertilised egg which contained genes from both father and mother. A growing band of biologists, however, think this definition incomplete.