Arduino - Cheap wifi connectivity - Andy Brown's personal website - thebmwz3.co.uk. Unbrick wr703n wifi router. Hello,if like myself you push the thing a little too far, you should find this usefull If nothing is responding anymore on your router : locate the GND, TX and RX on the board : solder some wire on it, this is very difficult, because it is really small and the solder doesn't stick well on it. 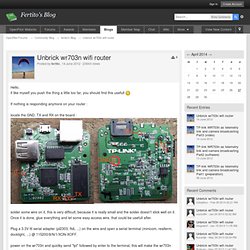 Once it is done, glue everything and let some easy access wire, that could be usefull after. Plug a 3.3V ttl serial adapter (pl2303, ftdi, ...) on the wire and open a serial terminal (minicom, realterm, docklight, ...) @ 115200/8/N/1/XON-XOFF. power on the wr703n and quiclky send "tpl" followed by enter to the terminal, this will make the wr703n enter in rescue U-boot hornet. Modlog.net. Please be aware this guide has incomplete information, and is very generalized. 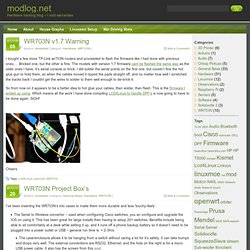 Ok, now I’ve got a reliable testing unit up and running – tested it for over a week. During that time I wanted to know if it had kernel panic’d or if the GPS had dropped out etc… So I looked into a few options: The easiest was to use telnet on from a laptop and just leave the screen open, this has other problems like battery life, bulky, heavy, and is over kill because you might as well just use the laptop.16×2 character display LCD module, would work ok, although you’d have to convert it to use serial USB input.

Total cost would be over $30 AUD or so.Possibly use bluetooth and connect to a tty through a virtual serial connection. I may use that in future but currently it’s buggy and very long windedThe winner was found here, I’d bought a 1.5inch KaiserBass keychain DPF a few years ago and figured I’d give it a go. Firstly dont blinbly follow the guide above, research it. Compiling LCD4Linux Flash the DPF. TP-LINK Portable 3G/3.75G IEEE 802.11n, IEEE 802.11g, IEEE 802.11b Wireless N Router (TL-MR3020): Computers & Accessories.

Serial Port for TL-WR703N. Syndicated content TL-WR703N. WR703N - Kean Electronics. TP-Link WR703N Expander - Open Source Hardware Developed in conjunction with the Sydney Hackerspace Robots and Dinosaurs Inc – June 2012 (featured on Hack A Day 24th June 2012) This project is a small USB Hub & FTDI dual serial/GPIO/JTAG adapter. It was designed to match the form factor of the TP-LINK WR703N router, but can be used with almost any USB host.

If you haven't used the WR703N - it is a great little OpenWRT box, made even better with the I/O expansion from this board. How To Get One As of June 2012, we now have some commercially made PCB's of the V1 design. I get weekly enquiries about these PCB's, but I don't have the time or funds to do another production run. Connector Info The upstream USB connection is intended to come via a 4 pin header plugged into the WR703N PCB below (existing USB connector removed). Jumper Info Theory of Operation It is pretty much just based on reference designs for GL850G USB Hub and FTDI FT2232L. Circuit Diagram & Files (for V1) Datasheets License. OpenWRT on WR703N. Clones Known clones of this device: Mercury MW151RM and the FAST FW171-3G. Supported Versions Unlike many newer TP-Link devices, there appears to be no hardware differences between the version for the Chinese market and the version for the international market.

It was the first device that utilized the AR9331 chipset to be ported to OpenWrt. Newer TP-Link devices (such as the TL-WR741ND v4.x also use AR9331). Features. TL-WR703n firmware: USB, Bittorrent, FTP/SFTP, DynamicDNS and more (Page 1) — General Discussion. Hi guys, I would like to share with you the firmware image for the TL-WR703 in which I have been working during the last weeks. 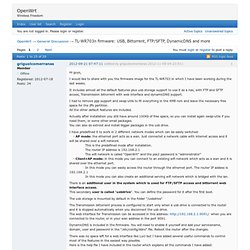 It includes almost all the default features plus usb storage support to use it as a nas, with FTP and SFTP access, Transmission bittorrent with web interface and dynamicDNS support. I had to remove ppp support and swap-utils to fit everything in the 4MB rom and leave the necessary free space for the jffs partition.All the other default features are included.

Actually after installation you still have around 100Kb of free space, so you can install again swap-utils if you need them, or some other small packages.You can also do extroot and install bigger packages in the usb drive. I have predefined it to work in 2 different network modes which can be easily switched: - AP mode: the ethernet port acts as a wan. There is an additional user in the system which is used for FTP/SFTP access and bittorrent web interface access.This secondary user is called "usbdrive". Flash TL-WR703N with OpenWRT.