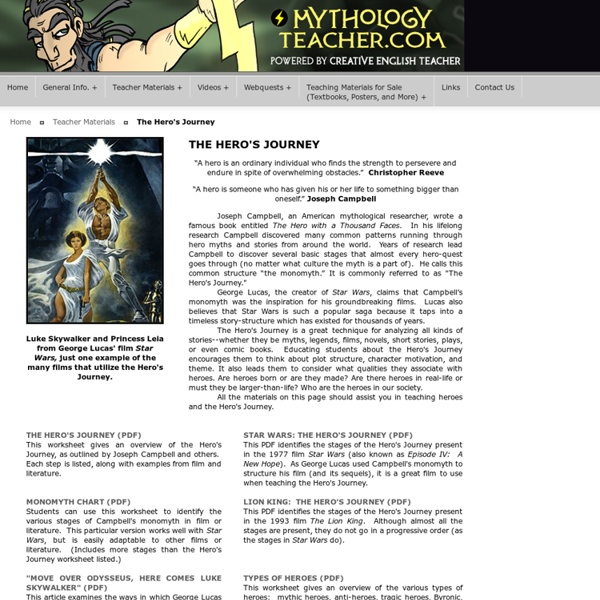 “A hero is an ordinary individual who finds the strength to persevere and endure in spite of overwhelming obstacles.” Christopher Reeve “A hero is someone who has given his or her life to something bigger than oneself.” Joseph Campbell Joseph Campbell, an American mythological researcher, wrote a famous book entitled The Hero with a Thousand Faces. George Lucas, the creator of Star Wars, claims that Campbell’s monomyth was the inspiration for his groundbreaking films. The Hero's Journey is a great technique for analyzing all kinds of stories--whether they be myths, legends, films, novels, short stories, plays, or even comic books. All the materials on this page should assist you in teaching heroes and the Hero's Journey.

Heroes Are Made of This: Studying the Character of Heroes ReadWriteThink couldn't publish all of this great content without literacy experts to write and review for us. If you've got lessons plans, activities, or other ideas you'd like to contribute, we'd love to hear from you. More Find the latest in professional publications, learn new techniques and strategies, and find out how you can connect with other literacy professionals. More Teacher Resources by Grade Your students can save their work with Student Interactives. More Home › Classroom Resources › Lesson Plans Lesson Plan Overview Featured Resources From Theory to Practice Designed to explore the hero and the heroic in literature, this sequence of activities can be used as a unit or as stand-alone activities. back to top Hero's Traits Reader's Log: Have students use this reproducible to track character traits as they read. Further Reading Moon, Brian. 2000. This lesson is based in part on: Rodrigues, Raymond J., and Dennis Badaczewski. 1978.

Tolkien's Middle-earth: Lesson Plans, Unit Two - Handouts Handouts Anglo-Saxon Runes This is an excerpt from Ruth Noel’s The Languages of Tolkien's Middle-earth. In the author's words, "The runes . . . are those shown on the map in The Hobbit. They are one of several types actually used by writers of Old English and other Germanic languages. The Tree of Language This diagram of language groups comes from The American Heritage Dictionary of Indo-European Roots, edited by Calvert Watkins. Beowulf and Grendel In this scene from Beowulf, the hero encounters Grendel for the first time — and the monster meets his match. Dwarf Catalogue from the Elder Edda This passage from the Old Norse poem "Voluspo" was Tolkien's source for the dwarf names in The Hobbit, as well as the name "Gandalf," which translates as "Wand Elf" or "Staff Elf" — not a dwarf, obviously, but perhaps a wizard. Unit Two Content OverviewComments for TeachersPreliminary QuizKey TermsHandoutsDiscussion TopicsSuggested ActivitiesBibliography Printer-Friendly Version

The Hero's Quest |Arthurian Legend| |Beowulf| |Classical Mythology| |Creation Stories| |Fairy Tales and Folktales| |Homer, The Iliad and The Odyssey| |Mythology Main Page| The all-purpose guide to epic moviesThis chart shows different archetypal roles at work in Harry Potter, Star Wars, and other movies: the hero, the threshold guardian, the trickster, etc. An Anti-Hero of One's OwnThis TED-ED video (4:11) explores the pattern of the anti-hero using references to Fahrenheit 451 and 1984, among others. Captioned, includes follow-up questions and other support. ArchetypesThis Google Doc lists and describes types of heroes, quests, stages, characteristics, and symbols. Students are invited to find examples. Chart of GodsThis printable handout details the Greek and Roman gods and goddesses, their spheres of influence, symbols, cities, and animals. Comparison of World MythsThis page outlines similarities and differences in world myths. The Hero's JourneyDetailed resource of the elements of the hero's journey.

The Epic of Gilgamesh- handouts and materials - Clayton Hig... The Epic of Gilgamesh is one of the of first recorded pieces of literature. It recounts the journey of the Sumerian king Gilgamesh, his friend Enkidu, and their adventures and trials. This unit will cover the form of the epic, the story of Gilgamesh and his journey, and companion texts covering the archetype of the flood story from 3 different traditions. Assignment #1 - download the following documents for class on Friday, February 21st - Gilgamesh characters, Hero's Journey Diagram, and Humbaba questions Assignment #2 - group assignment, complete the Hero project due Tues Quiz - Tuesday, Gilgamesh Characters, background notes, The Hero's Journey Readings - Epic of Gilgamesh, 3 Flood narratives Monday - present comparison charts on the flood narratives - Review for Gilgamesh Test Read the article " Storytelling, the Meaning of Life, and The Epic of Gilgamesh" - complete the analysis questions Tuesday - Gilgamesh Test

Encyclopedia of Myths Lessons from a Demigod The Epic of Gilgamesh has been read in the modern world for a little longer than a century, and, in that time, this oldest of stories has become a classic college text. In my own courses on ancient literature and mythology, it is the book I always begin with. But why should a tale whose origins stretch back more than four thousand years draw such attention in an age of genetic engineering and text messaging? The story begins with a narrator urging his readers to examine the fine walls of Uruk, the magnificent city in southern Mesopotamia where Gilgamesh ruled. Find the cornerstone and under it the copper box that is marked with his name. Gilgamesh is described as two-thirds god, one-third man, and he reigns over his city without rival. After an epic seven nights with the priestess, Enkidu loses his ability to commune with animals and seeks instead the company of his fellow humans in the city. Gilgamesh watches helplessly as Enkidu passes into death: But the king will not listen.

Six Elements Of The Epic Drake 257 Six Elements Of The Epic: 1) Plot centers around a Hero of Unbelievable Stature. The epic hero completes what everyone only attempts. In ancient epics, the hero often is either partially divine or at least protected by a god or God. 2) Involves deeds of superhuman strength and valor. 3) Vast Setting. 4) Involves supernatural and-or otherworldly forces. 5) Sustained elevation of style. 6) Poet remains objective and omniscient. Epic Origins: Generally, epics are also mythologized histories. 1) A conglomeration of pre-existing stories and characters. 2) Often of oral origin. 3) At least loosely based around historical or quasi-historical characters or events or characters. 4) Set in a mythologized distant time, traditionally in the past. Epics As Moral Codes (Or Political Propaganda): The epic nearly always: 1) Represents moral ideals and taboos in the behavior of the hero and antagonist. b) War and Violence. c) The Distribution of Wealth. d) Food and Alcohol. Epic Examples.

Why The Odyssey is the Perfect Book for High School English ‹ Literary Hub On the Surprising Relevance of the World's First Novel I’ve taught English in a public high school in Los Angeles for over two decades. Years ago, I tackled The Odyssey. I love its stories (they’re still fun to read), and it’s a pillar of Western literature, the foundation behind most quest and fantasy novels. Teaching Homer to underserved city kids seemed like a hard sell, but it really wasn’t; in fact, it was surprisingly more rewarding than many of my other adventures, like Kafka’s Metamorphosis, or The Catcher in the Rye, for example. Why? In my 12th-grade class, many students had heard of the Cyclops and Ulysses, but experiencing the entire Odyssey was new territory for most of them. The Odyssey has 24 books, so we analyzed and discussed the arc of the entire epic, reading several of the key books. Authors in the Tent: Quan Huynh on Finding Freedom From Within Prison Loading Ad We journeyed with Odysseus and made his story, his life, our own. Homer’s songs are all of our songs. A.G.

Lessons from a Demigod | The National Endowment for the Humanities The answer I have given to hundreds of students is that almost every joy and sorrow they will face in life was revealed in Gilgamesh millennia before they were born. Reading Gilgamesh will not only teach them to face the challenges that lie ahead, but also give them an appreciation for the idea that no matter how much our modern world might seem different from earlier times, the essence of the human experience remains the same. The story begins with a narrator urging his readers to examine the fine walls of Uruk, the magnificent city in southern Mesopotamia where Gilgamesh ruled. Hidden inside the walls is a treasure waiting to be discovered: Find the cornerstone and under it the copper box that is marked with his name. Gilgamesh is described as two-thirds god, one-third man, and he reigns over his city without rival. After an epic seven nights with the priestess, Enkidu loses his ability to commune with animals and seeks instead the company of his fellow humans in the city. *Trans.