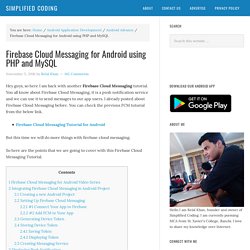 You all know about Firebase Cloud Messaging, it is a push notification service and we can use it to send messages to our app users. I already posted about Firebase Cloud Messaging before. You can check the previous FCM tutorial from the below link. Android - Gradient Radius as percentage of screen size - Recalll. From what Ive tested, the % does work, but not as you expected. 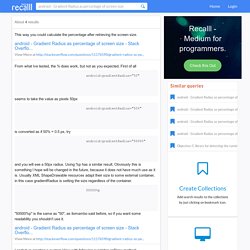 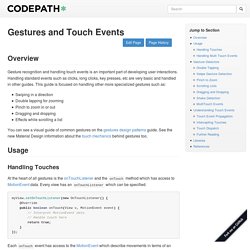 Handling standard events such as clicks, long clicks, key presses, etc are very basic and handled in other guides. This guide is focused on handling other more specialized gestures such as: Swiping in a directionDouble tapping for zoomingPinch to zoom in or outDragging and droppingEffects while scrolling a list You can see a visual guide of common gestures on the gestures design patterns guide. Usage. Android-best-practices/README.md at master · futurice/android-best-practices. Android SDK: Using the Text to Speech Engine. This tutorial will teach you to give your applications a voice with the Android SDK text to speech engine! 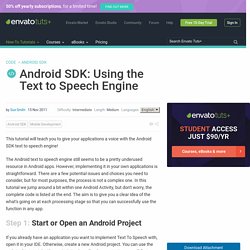 The Android text to speech engine still seems to be a pretty underused resource in Android apps. However, implementing it in your own applications is straightforward. There are a few potential issues and choices you need to consider, but for most purposes, the process is not a complex one. In this tutorial we jump around a bit within one Android Activity, but don't worry, the complete code is listed at the end. The aim is to give you a clear idea of the what's going on at each processing stage so that you can successfully use the function in any app. SwipeMenuListView/README.md at master · baoyongzhang/SwipeMenuListView. Android SDK: Receiving Data from the Send Intent. On the Android platform, the Intent system allows users to share content between apps. 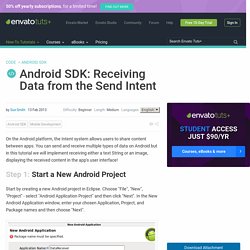 You can send and receive multiple types of data on Android but in this tutorial we will implement receiving either a text String or an image, displaying the received content in the app's user interface! Shared Element Activity Transition · codepath/android_guides Wiki. Overview Traditionally transitions between different activities or fragments involved enter and exit transitions that animated entire view hierarchies independent to each other. 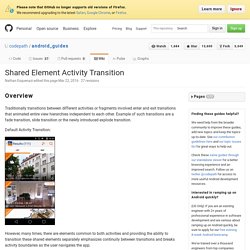 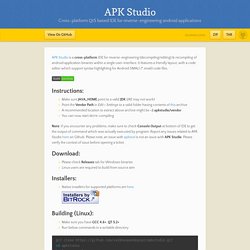 It features a friendly layout, with a code editor which support syntax highlighting for Android SMALI (*.smali) code files. Instructions: Make sure JAVA_HOME point to a valid JDK (JRE may not work)Point the Vendor Path in Edit > Settings to a valid folder having contents of this archiveA recommended location to extract above archive might be ~/.apkstudio/vendorYou can now start de/re-compiling Note: If you encounter any problems, make sure to check Console Output at bottom of IDE to get the output of command which was actually executed by program.

Report any issues related to APK Studio here on Github. Google Cloud Messaging GCM for Android and Push Notifications - Java Tutorial Blog. Android Broadcast Receivers. Broadcast Receivers simply respond to broadcast messages from other applications or from the system itself. 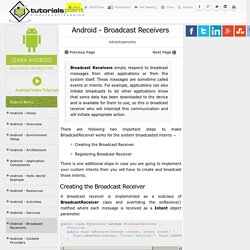 These messages are sometime called events or intents. For example, applications can also initiate broadcasts to let other applications know that some data has been downloaded to the device and is available for them to use, so this is broadcast receiver who will intercept this communication and will initiate appropriate action. There are following two important steps to make BroadcastReceiver works for the system broadcasted intents − Creating the Broadcast Receiver.Registering Broadcast Receiver. FFT based simple Spectrum Analyzer with Source Code. I am writing this blogpost to pay homage to my alma mater... i was not at my level best to understand all aspects of Electonics & Telecommunication, the Microprocessor, the Digital Communication, the Digital Signal processing as taught by my professors... however, after so many years while playing around with different software, i understand how valuable was their contribution to make me an engineer. i remember, how important was the lesson of digital communication, and digital signal processing taught by Dr. 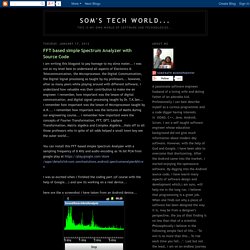 Augmented Reality iOS Tutorial: Location Based. Learn how to make a location based augmented reality app that displays points of interest over video! 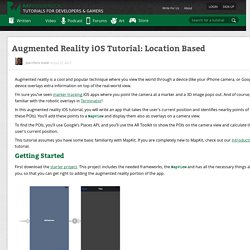 Augmented reality is a cool and popular technique where you view the world through a device (like your iPhone camera, or Google Glass), and the device overlays extra information on top of the real-world view. I’m sure you’ve seen marker tracking iOS apps where you point the camera at a marker and a 3D image pops out. And of course, you’re probably familiar with the robotic overlays in Terminator! In this augmented reality iOS tutorial, you will write an app that takes the user’s current position and identifies nearby points of interest (we’ll call these POIs).

You’ll add these points to a MapView and display them also as overlays on a camera view. To find the POIs, you’ll use Google’s Places API, and you’ll use the AR Toolkit to show the POIs on the camera view and calculate the distance from the user’s current position. Metaio Developer Portal. Getting Started with the Metaio SDK. There are only a few steps required to your first augmented reality app.

You can develop for iPhone, Android or use Unity. Download the Metaio SDK for free If you are new to mobile development, read the Getting Started guides below for you platform Read the Tutorials If you are ready to publish your app, change the application name or integrate the Metaio SDK into your application, you need to generate an application signature. Get the developer key now. App Creation with the Metaio SDK.

We currently have an APK which provides PHP support to SL4A (PhpForAndroid.apk) and we're working in a manual. Irontec is the company behind this project. About this project FAQ (Frequently Asked Questions) Getting help, getting involved. Damonkohler/sl4a. Jgillich/mytracks. Android Application Development Tutorial - 1 - Download and Install the Java JDK. Android learning. Android Development Tutorial. 1.1. The Android operating system Android is an operating system based on the Linux kernel. The project responsible for developing the Android system is called the Android Open Source Project (AOSP) and is lead by Google. The Android system supports background processing, provides a rich user interface library, supports 2-D and 3-D graphics using the OpenGL-ES (short OpenGL) standard and grants access to the file system as well as an embedded SQLite database.

An Android application typically consists of different visual and non visual components and can reuse components of other applications. 1.2. The Android system is a full software stack, which is typically divided into the four areas as depicted in the following graphic. The levels can be described as: Applications - The Android Open Source Project contains several default application, like the Browser, Camera, Gallery, Music, Phone and more. Google Play also offers an update service. 1.4. 2. 2.2. 2.3. 2.4. Android Development Tutorial.