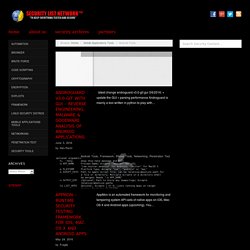 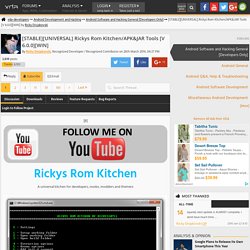 [HOW TO] Beginners Guide to Android ROM Development. Create Your Own Custom ROM - Android Development Galaxy Mini. So, Do you want to make a custom rom or, mod one that is made already? 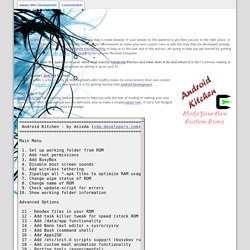 If your answer to this question is yes then you are at the right place. In this article I will help you get started with setting up an environment to make your own custom roms or edit the ones that are developed already. Monitor Your kids Smartphone Activities On Android with these 8 free apps. These, days, there is no stopping a child from growing up without the influence of tech gadgets, online content, and the Internet in general. 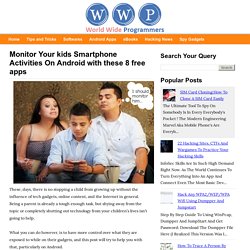 Being a parent is already a tough enough task, but shying away from the topic or completely shutting out technology from your children’s lives isn’t going to help. What you can do however, is to have more control over what they are exposed to while on their gadgets, and this post will try to help you with that, particularly on Android. Google Play Store may not have tougher restrictions than those found on Apple’s AppStore so if your kids own an Android device (or have access to your device at their liberty), you might want to set up some of these parental apps to help you monitor your kid’s online activities on the device.

Some allow restrictions of online sites they can visit, the monitoring of their text or call usage, app downloads, location and how long they can spend on their devices. 1. 2. 3. 4. Latest video tutorial shows how to bypass Google FRP. We recently made a detailed step-by-step guide to bypass FRP on Samsung Galaxy devices but as I said these methods expire over time whenever a new Android update is released. 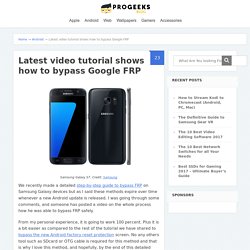 I was going through some comments, and someone has posted a video on the whole process how he was able to bypass FRP safely. From my personal experience, it is going to work 100 percent. Plus it is a bit easier as compared to the rest of the tutorial we have shared to bypass the new Android factory reset protection screen. No any others tool such as SDcard or OTG cable is required for this method and that is why I love this method, and hopefully, by the end of this detailed guide, you’re able to successfully get access back to your phone.

How To Hack All Android Phone Contacts using AFLogical. AFlogical is a forensic tool. 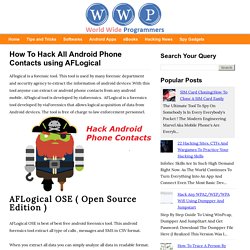 This tool is used by many forensic department and security agency to extract the information of android devices .With this tool anyone can extract or android phone contacts from any android mobile. AFlogical tool is developed by viaforensics. AFLogical is a forensics tool developed by viaForensics that allows logical acquisition of data from Android devices. The tool is free of charge to law enforcement personnel. AFLogical OSE ( Open Source Edition )

How to Root your Android - Rooting Tips, News and Tutorials  Android Tools. [Android] Next Launcher 3D v2.07.1 - ITA. Everything you need to know about Android launchers. One of Android's best features is that you can design your phone's interface. 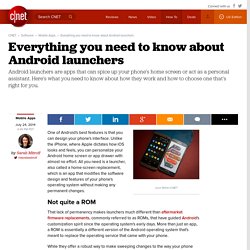 Unlike the iPhone, where Apple dictates how iOS looks and feels, you can personalize your Android home screen or app drawer with almost no effort. All you need is a launcher, also called a home-screen replacement, which is an app that modifies the software design and features of your phone's operating system without making any permanent changes. Not quite a ROM That lack of permanency makes launchers much different than aftermarket firmware replacements, commonly referred to as ROMs, that have guided Android's customization spirit since the operating system's early days. Top 40 Best Root Apps for Rooted Android phone 2016 (NEW) 1) Xposed Installer Best Rooted App 2016 Xposed Installer is one of best rooted app 2016.This is another app which is equal to rooting your phone. 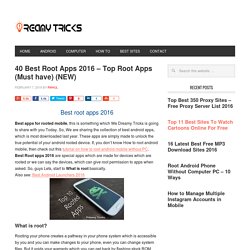 This app installs the internal binary to your phone which can change you notification bar looks, your settings, apply themes to your rom and change almost anything on your phone. You can download from xda. The Best Root Applications for Your Rooted Android. Thanks fellow root Freaks.. 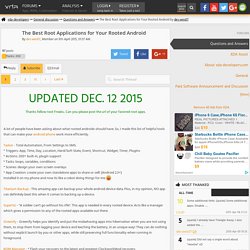 Can you please post the url of your favored root apps. A lot of people have been asking about what rooted androids should have. 19 Things You Didn’t Know Android’s ES File Explorer Can Do. ES File Explorer provides Android phone users a fully-featured file manager that explores phones, PCs, and Macs by leveraging LAN, FTP, and Remote Bluetooth. 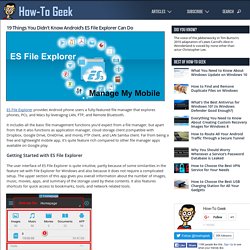 It includes all the basic file management functions you’d expect from a file manager, but apart from that it also functions as application manager, cloud storage client (compatible with Dropbox, Google Drive, OneDrive, and more), FTP client, and LAN Samba client. Far from being a free and lightweight mobile app, it’s quite feature rich compared to other file manager apps available on Google play. Getting Started with ES File Explorer The user interface of ES File Explorer is quite intuitive, partly because of some similarities in the feature set with File Explorer for Windows and also because it does not require a complicated setup. The upper section of this app gives you overall information about the number of images, music, movies, apps, and summary of the storage used by these contents. 1. A new window “Batch Rename” will appear. Exploring TWRP backups on Windows. Android Hackz: useful tools. Setting up adb on Linux for Android (Samsung Galaxy Note2 and Desire values provided)

Boot Animation Factory 1.2 Download (Free) - Boot Animation Factory.exe. Boot Animation Factory is the best solution for creating, previewing and managing Android boot animations. It's a product of many hours of work, and has lived up to this date as the best of its class. Main Features: Discover how to build an app with these easy-to-follow tutorials. Getting To Know The Android Platform: Building, Testing And Distributing Apps. Advertisement When iOS started to gain momentum, soon after the first iPhone launched, many businesses started to pay attention to apps. The number of apps for iOS grew exponentially, and every company, big and small, rushed to create their own app to support their business. For some time, iOS was the only platform you really had to care about. The audience was there. For a few years now, there has been another player in the market. Android as a platform can appear intimidating to new players.

In this article, we’ll explain parts of the application-building process and ecosystem for Android that could cause problems if misunderstood.

Root. Download USB Drivers for Android: Samsung, Motorola, Sony, LG, HTC, ASUS, Huawei. USB Driver is a compulsory thing to be installed on you PC so that your mobile device can interact with your PC. These drivers help us to connect our phone to the computer and perform tasks like transferring data, syncing your device with a PC, using tools like Odin, Sony Flashtool and SuperOneClick, and rooting and flashing firmwares on your device. Almost every manufacturer provides USB drivers with the handset package. Here, we are providing the links to USB drivers for most Android device manufacturers like Samsung, LG, Sony, Google, HTC, Motorola, Dell, ZTE, etc. Restore Your Motorola Droid RAZR from Bootloop Using Fastboot Files. If you own one of this famous device, and ever you get in a situation where your device stucks while booting, don’t panic. There is a way to recover your device by flashing fastboot files.

You should consider your device as not booting if: it’s stuck at Motorola logo, or if the boot animation is playing longer than expected, or if your device is vibrating constantly after some intervals. Fastboot files are the stock firmwares leaked from Motorola which will make your device restore back to the factory condition. Note that Motorola Droid RAZR has a permanent locked bootloader and due to this, it cannot be downgraded to a lower version of Android. Don’t try doing it or you might risk bricking your device. Download Android PC Suite: Top 5 Android PC Suite For Windows. Android PC Suite are very important tools if you wants to better operate your Android Smartphones and Tablets with your PC. Without Android PC Suite, after connecting your Android Device to PC, you will only able to transfer data in your Device’s internal memory or the Storage card available inside the device.

But generally, we wants to do other more important things like Managing contacts, messages, upgrading bulk software, backup phone’s content, installing apps from PC, connecting to internet from Android devices etc. For this, you need to install Android PC Suite on your computer that can help you in doing all these above mentioned tasks along with many other useful tasks. Handy adb commands for Android - Growing with the Web. 12 Android Tutorials for Beginners. [WIP] Safestrap 3.70/3.71 compatible ROMS li… Link to SS3.72 compatible. Android MOD Market - MOD's and Firware for your Verizon Samsung Galaxy S 4 ROM's. How To Make Android Apps: Top Resources and Tutorials. The name ‘Android’ has made a lot of buzz in the market and has reined a lot of space too.

Monitoring Android Network Traffic Part II: Cross Compiling TCPDUMP. Android-based Pwn Phone is prepared to do evil for your network’s own good. Mobile technology has made it possible for people to do an amazing amount with tablets and smartphones within the workplace—including hacking the living daylights out of the corporate network and other people’s devices. Pwnie Express is preparing to release a tool that will do just that. Its Pwn Phone aims to help IT departments and security professionals quickly get a handle on how vulnerable their networks are in an instant. All someone needs to do is walk around the office with a smartphone. Pwnie Express’ Kevin Reilly gave Ars a personal walk-through of the latest Pwn Phone, the second generation of the company’s mobile penetration testing platform.

While the 2012 first-generation Pwn Phone was based on the Nokia N900 and its Maemo 5 Linux-based operating system, the new phone is based on LG Nexus 5 phone hardware. Monitoring Android Network Traffic Part III: Installing & Executing TCPDUMP. How to Optimize, Speed Up, Clean up your Android Phone or Tablet for best Performance - GoGadgetX. Android OS one of the most flexible mobile operating system till now, Android based Smartphone and tablets has become very popular in a very short span of time. How to Crack Wi-Fi Passwords with Your Android Phone and Get Free Internet! « Null Byte. Want to take advantage of your neighbor's super fast Wi-Fi connection? If they're smart, they probably have it password protected (otherwise you wouldn't be reading this, would you?).