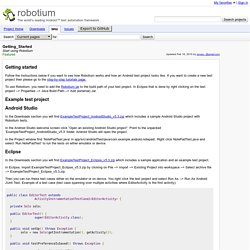 If you want to create a new test project then please go to the step-by-step tutorials page. To use Robotium, you need to add the Robotium jar to the build path of your test project. In Eclipse that is done by right clicking on the test project --> Properties --> Java Build Path --> Add (external) Jar. Example test project Android Studio In the Downloads section you will find ExampleTestProject_AndroidStudio_v5.3.zip which includes a sample Android Studio project with Robotium tests. Performance Testing for Mobile Apps and Websites: Webcast Now Online. If there’s one takeaway from Black Friday 2014, it’s that we need to ensure that our mobile apps will be able to perform under extremely heavy load. 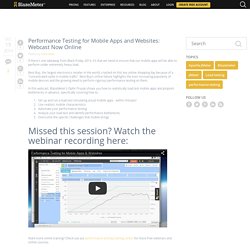 Best Buy, the largest electronics retailer in the world, crashed on this key online shopping day because of a “concentrated spike in mobile traffic”. Best Buy’s online failure highlights the ever-increasing popularity of mobile devices and the growing need to perform rigorous performance testing on them. Appium. Test the same app you submit to market Because Appium uses vendor-provided automation frameworks there is no need to compile in any Appium-specific or third-party code or frameworks to your app - you're testing the same app you're shipping. 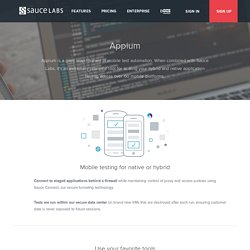 Use a standard automation specification WebDriver has become the de facto standard for automating web browsers, and is a W3C Working Draft. Appium has extended the protocol with extra API methods useful for mobile automation. Write your tests in any language Appium is an automation library that uses the WebDriver API and JSON Wire Protocol. A thriving open source project Appium is an open source project developed by Sauce Labs and a thriving community of contributors. 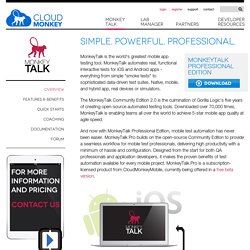 Downloaded over 70,000 times, MonkeyTalk is enabling teams all over the world to achieve 5-star mobile app quality at agile speed. And now with MonkeyTalk Professional Edition, mobile test automation has never been easier. In the Professional Edition Beta 1, some new features are available only for the Android platform. Calabash/calabash-android. Testing Support Library. The Android Testing Support Library provides an extensive framework for testing Android apps. 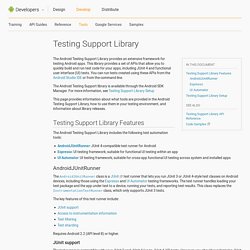 This library provides a set of APIs that allow you to quickly build and run test code for your apps, including JUnit 4 and functional user interface (UI) tests. You can run tests created using these APIs from the Android Studio IDE or from the command line. The Android Testing Support library is available through the Android SDK Manager. Robotium Recorder – Robotium Tech. Automating User Interface Tests. User interface (UI) testing lets you ensure that your app meets its functional requirements and achieves a high standard of quality such that it is more likely to be successfully adopted by users. 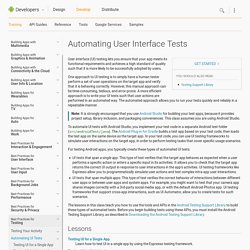 One approach to UI testing is to simply have a human tester perform a set of user operations on the target app and verify that it is behaving correctly. However, this manual approach can be time-consuming, tedious, and error-prone. A more efficient approach is to write your UI tests such that user actions are performed in an automated way. The automated approach allows you to run your tests quickly and reliably in a repeatable manner.

Note: It is strongly encouraged that you use Android Studio for building your test apps, because it provides project setup, library inclusion, and packaging conveniences. Android UI Automated Testing. Appium: Mobile App Automation Made Awesome. Testdroid - Mobile App Testing on Android and iOS Devices. Monkeyrunner. The monkeyrunner tool provides an API for writing programs that control an Android device or emulator from outside of Android code. 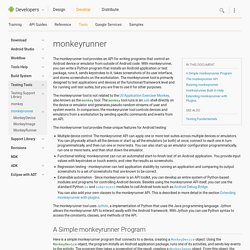 With monkeyrunner, you can write a Python program that installs an Android application or test package, runs it, sends keystrokes to it, takes screenshots of its user interface, and stores screenshots on the workstation. The monkeyrunner tool is primarily designed to test applications and devices at the functional/framework level and for running unit test suites, but you are free to use it for other purposes. The monkeyrunner tool is not related to the UI/Application Exerciser Monkey, also known as the monkey tool. The monkey tool runs in an adb shell directly on the device or emulator and generates pseudo-random streams of user and system events. In comparison, the monkeyrunner tool controls devices and emulators from a workstation by sending specific commands and events from an API.

Google Espresso: Fast Automated Android UI Testing in the Cloud. Google has open sourced Espresso, an Android automated testing framework that enables one to run tests on x86 machines in the cloud in a multi-threaded environment, solving the concurrency issues associated with UI testing. 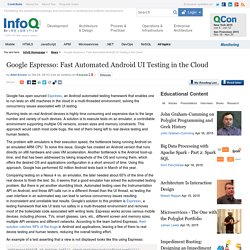 Running tests on real Android devices is highly time consuming and expensive due to the large number and variety of such devices. A solution is to execute tests on an emulator, a controllable environment supporting multiple OS versions, screen sizes and memory constraints. This approach would catch most code bugs, the rest of them being left to real device testing and human testers. The problem with emulators is their execution speed, the bottleneck being running Android on an emulated ARM CPU.

To solve this issue, Google has created an Android version that runs directly on x86 hardware and uses VM acceleration. Comparing testing on a Nexus 4 vs. an emulator, the later needed about 65% of the time of the real device to finish the test. Ranorex - Android App Testing. Automated Testing Solutions for Android. There are a number of automated testing frameworks or tools for Android applications, including but not limited to Activity Instrumentation, MonkeyRunner, Robotium, or Robolectric. 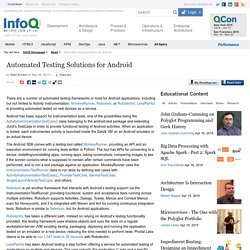 LessPainful is providing automated tested on real devices as a service. Android has basic support for instrumentation tests, one of the possibilities being the ActivityInstrumentationTestCase2 class belonging to the android.test package and extending JUnit’s TestCase in order to provide functional testing of Android activities.