Android apps worth a try 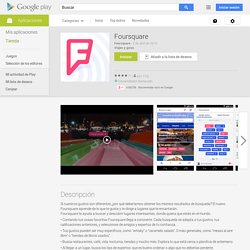 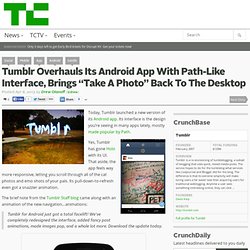 Its interface is the design you’re seeing in many apps lately, mostly made popular by Path. Yes, Tumblr has gone Holo with its UI. That aside, the app feels way more responsive, letting you scroll through all of the cat photos and emo shots of your pals. Its pull-down-to-refresh even got a snazzier animation. The brief note from the Tumblr Staff blog came along with an animation of the new navigation…animations: 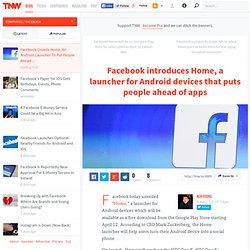 According to CEO Mark Zuckerberg, the Home launcher will help users turn their Android device into a social phone. On launch, Home will work on the HTC One X, HTC One X+, Samsung GALAXY S III and Samsung GALAXY Note II. In the coming months, additional devices like the HTC One and the Samsung GALAXY S4 will be supported as well. Facebook Isn’t Forking Android, They’re Spooning With It. Facebook is absolutely, positively, 100 percent not working on a phone. 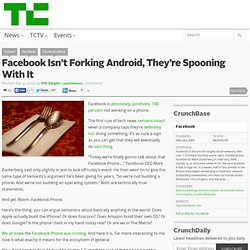 The first rule of tech news remains intact: when a company says they’re definitely not doing something, it’s as sure a sign as you can get that they will eventually do said thing. “Today we’re finally gonna talk about that Facebook Phone…,” Facebook CEO Mark Zuckerberg said only slightly in jest to kick off today’s event. He then went on to give the same type of semantics argument he’s been giving for years. “So we’re not building a phone. And we’re not building an operating system.” And yet. Here’s the thing: you can argue semantics about basically anything in the world. We all knew the Facebook Phone was coming. “You don’t need to fork Android to do this,” Zuckerberg said at the beginning of his keynote. But why does that matter? Fredwilson : Hot damn. I love the new Twitter... Deezer Launches 'Recharged' Android App In Beta With Fresh Design.

On-demand music streaming service Deezer moved one step closer to launching an Android app today, after it released a new and “recharged” beta version to the public. 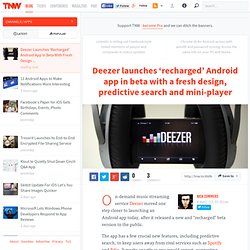 The app has a few crucial new features, including predictive search, to keep users away from rival services such as Spotify and Rdio. It works exactly as you would expect, suggesting particular artists or tracks as soon as you begin typing into the search bar. The monochromatic color scheme is also exceptional here, with a few simple icons representing a song, record or musician category. While predictive search isn’t a particularly innovative feature, it does improve the overall speed at which users can find and select new records to listen to – particularly when on the move or handling a smartphone with one hand. The app also has a built-in mini-player, which allows users to leave the native app but still have access to some basic controls from the lock screen and notification center. Facebook Home offers a fresh take on Android UI (images) It should come as little surprise to industry observers that Facebook plans to unveil both a rich, skinned version of its Android app at a press event tomorrow, along with the first hardware to run that experience out of the box. 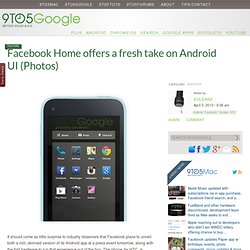 The phone, by HTC, is appropriately named “First”—appropriate because of its status as the première phone to undergo Facebookification and its similarity to the name of HTC’s newest flagship, the One. More screenshots follow: Facebook Home has been well leaked by now, thanks in part to Android Police, information from Techcrunch, and 9to5′s own Mark Gurman. What we haven’t seen yet are many indications of the visual highlights of the collaboration; what will these “Facebook phones” look like when you’re actually using one? In a word: good.

Full details will have to wait until tomorrow. Facebook To Reveal “Home On Android” Sources Say Is A Modified OS On HTC At 4/4 Event. Facebook just invited press to an event at its headquarters on April 4th to “Come See Our New Home On Android”. 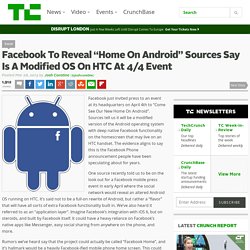 Sources tell us it will be a modified version of the Android operating system with deep native Facebook functionality on the homescreen that may live on an HTC handset. The evidence aligns to say this is the Facebook Phone announcement people have been speculating about for years. One source recently told us to be on the look out for a Facebook mobile press event in early April where the social network would reveal an altered Android OS running on HTC.

Facebook still has an Android problem. By Nathaniel Mott On March 25, 2013 You’d think that Facebook, a company intent on proving its mobile prowess, would better support the world’s most popular mobile operating system. 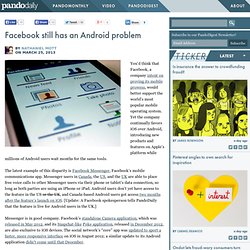 Yet the company continually favors iOS over Android, introducing new products and features on Apple’s platform while millions of Android users wait months for the same tools. The latest example of this disparity is Facebook Messenger, Facebook’s mobile communications app. Messenger users in Canada, the US, and the UK are able to place free voice calls to other Messenger users via their phone or tablet’s data connection, so long as both parties are using an iPhone or iPad. Android users don’t yet have access to the feature in the US or the UK, and Canada-based Android users got access two months after the feature’s launch on iOS.

Messenger is in good company. Evernote 5 Lands On Android With Updated Camera, UI Tweaks. Evernote has just updated its Android app to version 5.0, the same update that recently hit both iOS and Mac OS X. 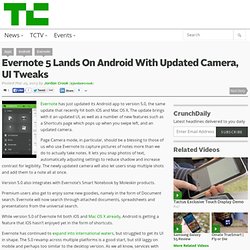 The update brings with it an updated UI, as well as a number of new features such as a Shortcuts page which pops up when you swipe left, and an updated camera. Page Camera mode, in particular, should be a blessing to those of us who use Evernote to capture pictures of notes more than we do to actually take notes. It lets you snap photos of text, automatically adjusting settings to reduce shadow and increase contrast for legibility. The newly updated camera will also let users snap multiple shots and add them to a note all at once. Version 5.0 also integrates with Evernote’s Smart Notebook by Moleskin products. Premium users also get to enjoy some new goodies, namely in the form of Document search.

While version 5.0 of Evernote hit both iOS and Mac OS X already, Android is getting a feature that iOS hasn’t enjoyed yet in the form of shortcuts. Google’s Keep Note-Taking Web And Android App Gets Its Official Public Launch. After a brief early appearance, Google Keep, the note-taking app from the search giant, is now live. 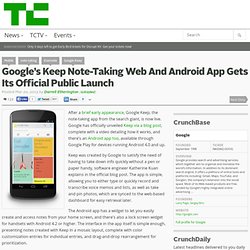 Google has officially unveiled Keep via a blog post, complete with a video detailing how it works, and there’s an Android app too, available through Google Play for devices running Android 4.0 and up. Keep was created by Google to satisfy the need of having to take down info quickly without a pen or paper handy, software engineer Katherine Kuan explains in the official blog post. The app is simple, allowing you to either type or quickly record and transcribe voice memos and lists, as well as take and pin photos, which are synced to the web-based dashboard for easy retrieval later.