PerlForAndroid.zip. Perl on Android. Brothers and Sisters in Perl, Recently I saw in a shop a tablet running Android4. 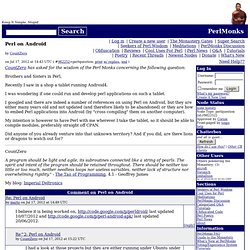 I was wondering if one could run and develop perl applications on such a tablet. I googled and there are indeed a number of references on using Perl on Android, but they are either many years old and not updated (and therefore likely to be abandoned) or they are how to embed Perl applications into Android (by "cross compiling" them on another computer). Perldroid - A port of the Perl language on Android. Can I develop Android applications in Perl. ApiReference - android-scripting - API Reference (release R6) - Scripting Layer for Android brings scripting languages to Android. Perl-android-apk - Embed a Perl for Android Interpreter into an APK.