iPhone 7 tops 2016 smartphone performance chart. Benchmark specialists AnTuTu have put together a chart that highlights 2016’s top performing smartphones, and it’s no surprise to see iPhone 7 and iPhone 7 Plus right at the top of it. 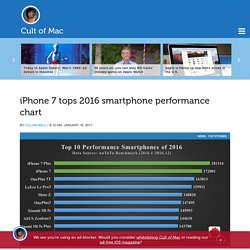 Apple’s latest handsets grabbed the first and second spots with the highest benchmark scores, followed by the OnePlus 3T. There’s no sign of a Samsung device in the top ten. Apple’s A-series processors have been wowing us with stellar performance every year since the original A4 made its debut in the first iPad in 2010. They outperform rival mobile chips from the likes of Qualcomm and Samsung, despite fewer cores and slower clock speeds.

The A10 Fusion inside iPhone 7 and iPhone 7 Plus is Apple’s best processor yet, with an all-new architecture that offers twice the speed and three times the graphics performance of iPhone 6. Fitness Buddy : 1700 Exercises – Applications Android sur Google Play. 6 Best Phablets You Can Buy in 2015. What’s the best phablet on the market in 2016? 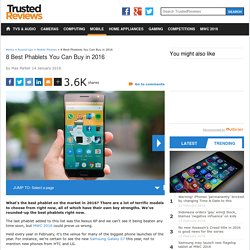 There are a lot of terrific models to choose from right now, all of which have their own key strengths. We've rounded-up the best phablets right now. The last phablet added to this list was the Nexus 6P and we can't see it being beaten any time soon, but MWC 2016 could prove us wrong. Held every year in February, it's the venue for many of the biggest phone launches of the year. For instance, we're certain to see the new Samsung Galaxy S7 this year, not to mention new phones from HTC and LG. Cheap Android Phones. Vodafone Smart Ultra 6: Battery Life, Sound and Verdict. Vodafone Smart Ultra 6: Battery Life One worry of a cheaper phone with a very large screen is whether it’ll foul-up on battery life. 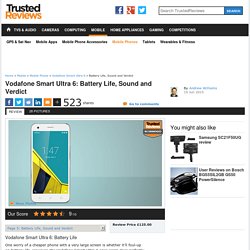 However, the Vodafone Smart Ultra 6 once again does perfectly well. 6 Best Cheap Mobile Phones and Budget Smartphone. If you're looking for a cheap mobile phone or the best budget smartphone, you've come to the right place. 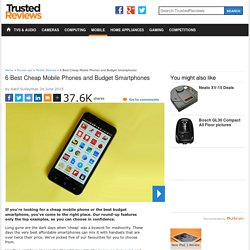 Our round-up features only the top examples, so you can choose in confidence. Long gone are the dark days when 'cheap' was a byword for mediocrity. These days the very best affordable smartphones can mix it with handsets that are over twice their price. We've picked five of our favourites for you to choose from. Headline-grabbing phones like the HTC One M9, the Samsung Galaxy S6 and iPhone 6 are great, but they aren’t the be-all and end-all of the mobile world. 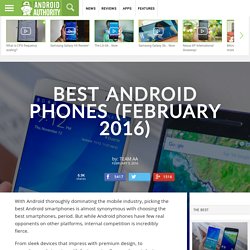 How to back up your Android smartphone to your PC. Lenovo Unveils a Host of Affordable Windows/Android Tablets. Microsoft Just Took Android’s Future Out of Google’s Hands. With the announcement that Microsoft would partner with the truly open-source, Android-based Cyanogen OS to provide a bundled suite of apps, both companies made one thing very clear: Android’s not just for Google anymore. 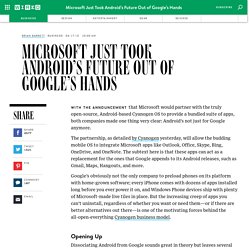 The partnership, as detailed by Cyanogen yesterday, will allow the budding mobile OS to integrate Microsoft apps like Outlook, Office, Skype, Bing, OneDrive, and OneNote. The subtext here is that these apps can act as a replacement for the ones that Google appends to its Android releases, such as Gmail, Maps, Hangouts, and more. Google’s obviously not the only company to preload phones on its platform with home-grown software; every iPhone comes with dozens of apps installed long before you ever power it on, and Windows Phone devices ship with plenty of Microsoft-made live tiles in place. 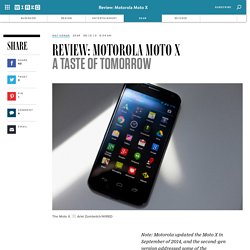 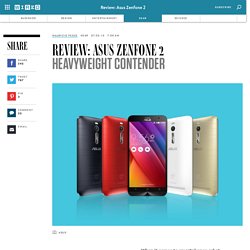 Handy gestures can launch specific apps from standby. Fully customizable skin. Ultra-cheap, considering what you get. Comes with 5GB of free cloud storage forever, and 100GB of Google Drive storage free for two years. 8 Things You Can Do In Android’s Developer Options. The Developer Options menu in Android is a hidden menu with a variety of advanced options. 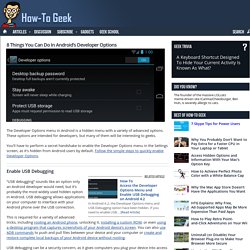 These options are intended for developers, but many of them will be interesting to geeks. You’ll have to perform a secret handshake to enable the Developer Options menu in the Settings screen, as it’s hidden from Android users by default. Follow the simple steps to quickly enable Developer Options. Enable USB Debugging. 6 Things You Don’t Have to Root Android to Do Anymore. For years, Android enthusiasts have been rooting their devices to do things that Android doesn’t allow by default. 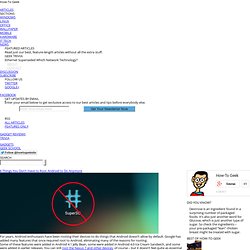 Google has added many features that once required root to Android, eliminating many of the reasons for rooting. Some of these features were added in Android 4.1 Jelly Bean, some were added in Android 4.0 Ice Cream Sandwich, and some were added in earlier releases. Android USB Connections Explained: MTP, PTP, and USB Mass Storage. Older Android devices support USB mass storage for transferring files back and forth with a computer. Modern Android devices use the MTP or PTP protocols — you can choose which one you prefer. To select a USB connection protocol, open the Settings app, tap Storage, tap the menu button, and tap USB computer connection. What is a Custom Recovery on Android, and Why Would I Want One? Want to install a custom Android ROM — in other words, a third-party version of the Android operating system — like CyanogenMod? You’ll probably be instructed to install a custom recovery, too. All Android devices ship with a recovery environment preinstalled.

This recovery software can be used to restore the device to factory default settings, update its operating system, and perform other diagnostic tasks. 5+ Cool Uses for Android’s Daydream Mode. 8 Things You Can Do In Android’s Developer Options. HTG Explains: How Android Manages Processes. Windows allows desktop apps to remain running whether they’re visible or not, while Apple’s iOS only allows apps to perform a few limited tasks in the background. Android sits somewhere in between — apps running in the foreground are prioritized, but apps have much more freedom to run in the background than they do on iOS. How To Create a Full Android Phone or Tablet Backup Without Rooting or Unlocking Your Device. Android includes a built-in way to back up and restore the contents of your phone or tablet. All you need is a computer and a device running Android 4.0 (Ice Cream Sandwich) or newer.