Android - How to configure VPN programatically? Jeff Sharkey » Modifying the Android logcat stream for full-color debugging. I’ve been keeping busy writing all sorts of fun stuff lately, but a few weeks ago I was really fighting with Android’s logcat debugging stream. 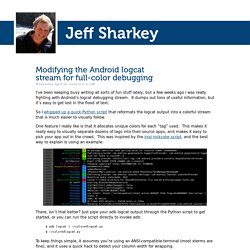 It dumps out tons of useful information, but it’s easy to get lost in the flood of text. So I whipped up a quick Python script that reformats the logcat output into a colorful stream that is much easier to visually follow. One feature I really like is that it allocates unique colors for each “tag” used. This makes it really easy to visually separate dozens of tags into their source apps, and makes it easy to pick your app out in the crowd. This was inspired by the irssi nickcolor script, and the best way to explain is using an example: There, isn’t that better? $ adb logcat | ~/coloredlogcat.py $ ~/coloredlogcat.py To keep things simple, it assumes you’re using an ANSI-compatible terminal (most xterms are fine), and it uses a quick hack to detect your column width for wrapping.

Android Development: More Than a Lot of Google Maps Markers. The purpose of the article is to demonstrate a method on how to extend the capabilities of the Google Maps API on Android devices. 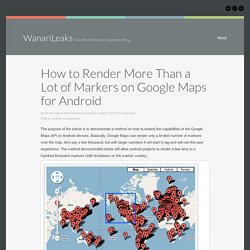 Basically, Google Maps can render only a limited number of markers over the map, let’s say a few thousand, but with larger numbers it will start to lag and will ruin the user experience. GenyMotion. Android-screen-monitor - Android Screen Monitor. The Android Screen Monitor (ASM) is a tool to monitor screen on the device or emulator. 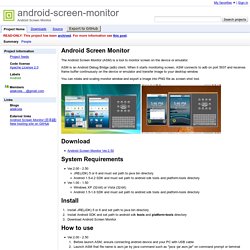 ASM is an Android Debug Bridge (adb) client, When it starts monitoring screen, ASM connects to adb on port 5037 and receives frame buffer continuously on the device or emulator and transfer image to your desktop window. You can rotate and scaling monitor window and export a image into PNG file as screen shot tool. Mirroring an Android device screen onto your desktop (The Mobile Frontier) Have you ever needed to show a screen from your Android device on a desktop? 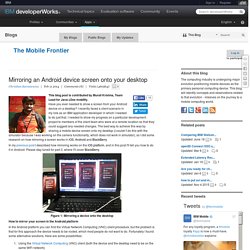 I recently faced a client scenario in my role as an IBM application developer in which I needed to do just that. Various Development Tools in Android - Android Blazin. 1] Robotium: Robotium is a test framework created to make it easy to write powerful and robust automatic black-box test cases for Android applications. 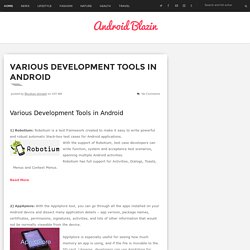 With the support of Robotium, test case developers can write function, system and acceptance test scenarios, spanning multiple Android activities.Robotium has full support for Activities, Dialogs, Toasts, Menus and Context Menus. Read More 2] AppXplore: With the AppXplore tool, you can go through all the apps installed on your Android device and dissect many application details – app version, package names, certificates, permissions, signatures, activities, and lots of other information that would not be normally viewable from the device. AppXplore is especially useful for seeing how much memory an app is using, and if the file is movable to the SD card. 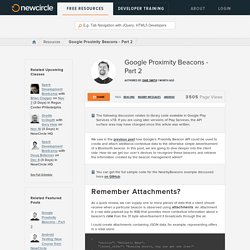 If you are using later versions of Play Services, the API surface area may have changed since this article was written. We saw in the previous post how Google's Proximity Beacon API could be used to create and attach additional contextual data to the otherwise simple advertisement of a Bluetooth beacon. In this post, we are going to dive deeper into the client side. How do we get our user's devices to recognize these beacons and retrieve the information created by the beacon management admin?

Android-OpenCV. How to Customize Android UI Components. It is not uncommon for developers to find themselves in need of a UI component that is either not provided by the platform they are targeting or is, indeed, provided, but lacks a certain property or behavior. 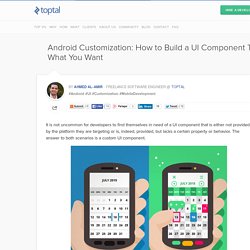 The answer to both scenarios is a custom UI component. The Android UI model is inherently customizable, offering the means to create custom UI components in various ways: Inherit an existing component (i.e. TextView, ImageView, etc.), and add/override needed functionality. Getting Started. Android Design Support Library. Posted by Ian Lake, Developer Advocate Android 5.0 Lollipop was one of the most significant Android releases ever, in no small part due to the introduction of material design, a new design language that refreshed the entire Android experience. 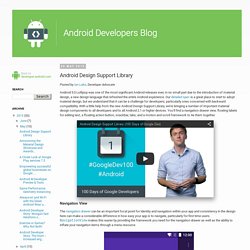 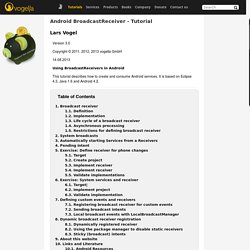 Android - How to use PendingIntent to communicate from a Service to a client/Activity. Android Services. Android Services - Tutorial Copyright © 2011, 2012, 2013 vogella GmbH Developing own services and using system services in Android This tutorial describes how to create and consume Android services. 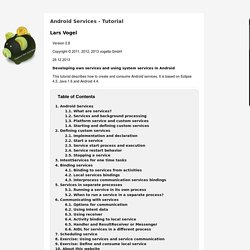 I've tried to make my application distinct between debug version, release version, in some cases staging version, free, paid premium... and the list goes on and on... So... I've asked the pro's, it was hard for me to describe the question, but I think it is right. I got no answer so I've went and searched a bit, and found an article explaining how this things work, I'm not going to go by all the explanation, I'll just lay it down. First we define the certificates: The MD5 for each certificate can be copied from the export dialog in the final step of exporting a signed application in Eclipse, for debug md5 sign it with you debug keystore.

Android Sending and Receiving data from remote server using IntentService. Android Charting Library. Android charts. Removing the pain points from Android development. I’ve been doing a lot of Android development over the past year or so and I’ve gradually accumulated a handful opinions about what I think sucks the most about it.

Overall I think it’s getting better. The new build system and IDE are leaps and bounds better than ant and Eclipse. Memory Analysis for Android Applications. [This post is by Patrick Dubroy, an Android engineer who writes about programming, usability, and interaction on his personal blog. — Tim Bray] The Dalvik runtime may be garbage-collected, but that doesn't mean you can ignore memory management. You should be especially mindful of memory usage on mobile devices, where memory is more constrained. In this article, we're going to take a look at some of the memory profiling tools in the Android SDK that can help you trim your application's memory usage.

Some memory usage problems are obvious. For example, if your app leaks memory every time the user touches the screen, it will probably trigger an OutOfMemoryError eventually and crash your app.