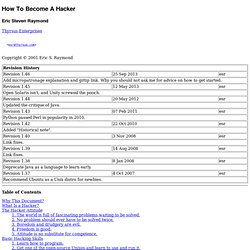 Raymond As editor of the Jargon File and author of a few other well-known documents of similar nature, I often get email requests from enthusiastic network newbies asking (in effect) "how can I learn to be a wizardly hacker? ". Back in 1996 I noticed that there didn't seem to be any other FAQs or web documents that addressed this vital question, so I started this one. A lot of hackers now consider it definitive, and I suppose that means it is. Still, I don't claim to be the exclusive authority on this topic; if you don't like what you read here, write your own. If you are reading a snapshot of this document offline, the current version lives at Note: there is a list of Frequently Asked Questions at the end of this document. Numerous translations of this document are available: ArabicBelorussianChinese (Simplified), Czech, Danish, Dutch, Estonian, German, GreekItalianHebrew, Norwegian, PersianPortuguese (Brazilian), RomanianSpanish, Turkish, and Swedish. 1. 2. 3. 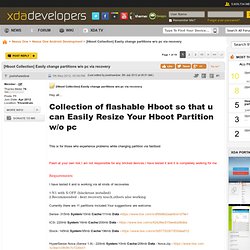 Collection of flashable Hboot so that u can Easily Resize Your Hboot Partition w/o pc This is for those who experience problems while changing partition via fastboot Flash at your own risk.I am not responsible for any bricked devices.I have tested it and it is completely working for me Requirements I have tested it and is working via all kinds of recoveries 1.N1 with S-OFF (blackrose installed) 2.Recommended : 4ext recovery touch,others also working Currently there are 11 partitions included.Your suggestions are welcome. Nexus One: How to unroot device and restore back to the original rom. This guide will explain how to restore a rooted/custom rom Nexus One back to its original Google image. 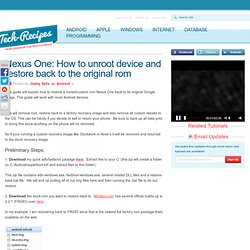 This guide will work with most Android devices. This will remove root, restore back to a factory recovery image and also remove all custom tweaks to the OS. This can be handy if you decide to sell or return your phone. Be sure to back up all data prior to doing this since anything on the phone will be removed. So if your running a custom recovery image like Clockwork or Anon’s it will be removed and returned to the stock recovery image.

Preliminary Steps: 1. This zip file contains adb-windows.exe, fastboot-windows.exe, several related DLL files and a restore-back.bat file. 2. In my example, I am recovering back to FRG83 since that is the newest full factory rom package thats available on the web. 3. » Android dalla A alla Z. How to Install Android Adb & Fastboot Drivers on Your Windows PC [Guide] ADB – stands for Android Debug Bridge and helps you to build a connection between your Android Emulator or Android Device and your computer. 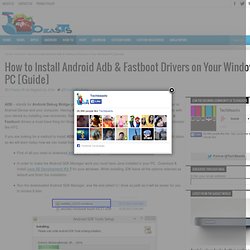 Having ADB and Fastboot drivers installed is essential if you want to play with your device by installing new recoveries, flashing custom roms and mods and trying other similar tricks. ADB & Fastboot drivers a must have thing for Google Nexus owners as well as these are important for some other devices like HTC. If you are looking for a method to install ADB & Fastboot drivers on your windows PC you’ve spotted the right place as we will learn today how we can install these drivers. First of all you need to download Android SDK Tools form Android Development Site.In order to make the Android SDK Manager work you must have Java installed in your PC.

Download & Install Java SE Development Kit 7 for your windows. Complete the installation process and press the Finish button in the end in order to run the Android SDK Manager. [GUIDA] Installazione driver Android su PC/MAC e Fastboot. HTC Desire: S-OFF, di che si tratta. How to Install any Jelly Bean or Ice Cream Sandwich ROM on a Nexus One. Installing Android 4 ICS on the Google Nexus One. Disclaimer: This is a guide for rooting and flashing the Google Nexus One smartphone. 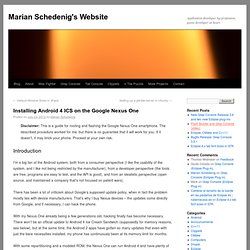 The described procedure worked for me, but there is no guarantee that it will work for you. If it doesn’t, it may brick your phone. Proceed at your own risk. Introduction. [20/02/13][Guide][Memory Script]Installation of Mounts2SD[Automated/Playstore App] [20/02/13][Guide][Memory Script]Installation of Mounts2SD[Automated/Playstore App] Update #1: The attached zip file now works perfectly Update #2: Fully Automated: new zip file attached at the end of this post. 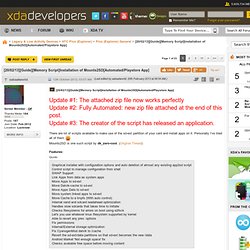 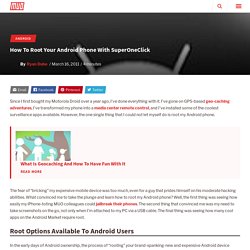 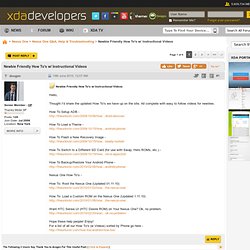 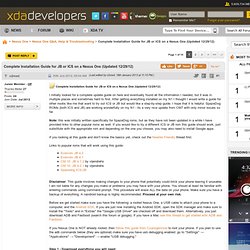 After getting everything installed on my N1 I thought I would write a guide for other noobs like me that want to try out ICS or JB but would like a step-by-step guide. I hope that it is helpful. SpazeDog ROMs (both ICS and JB) are working wonderfully on my N1 - its a very nice update from CM7 with only minor issues so far. 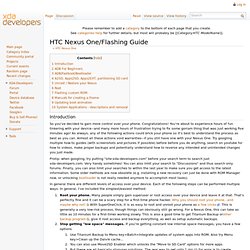 Congratulations! You're about to experience hours of fun tinkering with your device--and many more hours of frustration trying to fix some gorram thing that was just working five minutes ago! As always, any of the following actions could brick your phone so it's best to understand the process as best as you can. Nexus One with a broken power button[Solved] I have a Nexus One with a broken power button! No matter what you do, the phone will not turn on..So I had the following options 1) Return the same to HTC is the phone is under warranty and you are in the United States. 2) Get it repaired from a HTC service center in your country. 3) Use a different button on the phone to perform the same set of operations as the power button. Come aggiornare la ROM di un Nexus One (anche con il tasto di accensione rotto) Quando ho iniziato a sviluppare applicazioni per Android, mi sono informato su quale fosse il telefonino Android di riferimento per i programmatori.