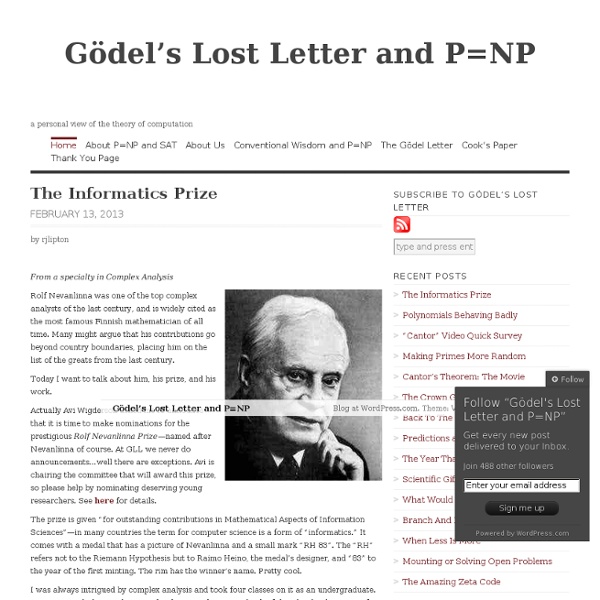 Difference map algorithm Iterations 0, 100, 200, 300 and 400 in the difference-map reconstruction of a grayscale image from its Fourier transform modulus Although originally conceived as a general method for solving the phase problem, the difference-map algorithm has been used for the boolean satisfiability problem, protein structure prediction, Ramsey numbers, diophantine equations, and Sudoku,[1] as well as sphere- and disk-packing problems.[2] Since these applications include NP-complete problems, the scope of the difference map is that of an incomplete algorithm. Whereas incomplete algorithms can efficiently verify solutions (once a candidate is found), they cannot prove that a solution does not exist. Algorithm[edit] The problem to be solved must first be formulated as a set intersection problem in Euclidean space: find an x in the intersection of sets A and B. x ↦ D(x) = x + β [ PA( fB(x)) − PB( fA(x)) ] , fA(x) = PA(x) − (PA(x)−x)/β , fB(x) = PB(x) + (PB(x)−x)/β . D(x) = x + PA(2 PB(x) − x) − PB(x) .

Fetus Business. No, It's Not A Pun Anymore. This Is A Blog For Fetuses. DEAL. Finger Trees - Andrew Gibiansky List of NP-complete problems This is a list some of the more commonly known problems that are NP-complete when expressed as decision problems. As there are hundreds of such problems known, this list is in no way comprehensive. Many problems of this type can be found in Garey & Johnson (1979). Graphs and hypergraphs[edit] Graphs occur frequently in everyday applications. NP-complete special cases include the edge dominating set problem, i.e., the dominating set problem in line graphs. Mathematical programming[edit] Formal languages and string processing[edit] Games and puzzles[edit] Other[edit] NP-complete special cases include the minimum maximal matching problem,[71] which is essentially equal to the edge dominating set problem (see above). See also[edit] Notes[edit] References[edit] General Garey, Michael R.; Johnson, David S. (1979), Computers and Intractability: A Guide to the Theory of NP-Completeness, W. Specific problems Friedman, E (2002). External links[edit]

Kenyan Pundit Buck: An Android (and Java!) build tool Buck is a build system for Android that encourages the creation of small, reusable modules consisting of code and resources. Because Android applications are predominantly written in Java, Buck also functions as a Java build system. Learn more about the strategies Buck uses to build Java code so quickly. Features Buck can help you do the following:Speed up your Android builds. Buck builds independent artifacts in parallel to take advantage of multiple cores. How Buck Works Buck has three primary concepts:A build rule is a procedure for producing an output file from a set of input files.A build target is a string identifier for a build rule. When building the output of a build rule, all of the rule's transitive dependencies are built first. Is Buck for Me? Buck is designed for building multiple deliverables from a single repository rather than across multiple repositories.

Rough Type: Nicholas Carr's Blog Steps to create a Vagrant Base Box with Ubuntu 14.04 Desktop (GUI) and VirtualBox Since the advent of the IaaS and PaaS providers, the decline in usage of monolithic architectures (e.g.: application server + relational DB) and the need for distributed and automatically scalable applications, as software developers we have to be increasingly more aware and skilled in the tools and techniques used to orchestrate and automate the deployment of all the different components that our architecture might end up with. Among these tools, normally encompassed in the DevOps space, I am currently very interested in Vagrant, Docker, Ansible and Ubuntu JuJu. Although I already use Vagrant, today I decided I wanted to know how to create my own Base Boxes that I can reuse. Most of the guides out there focus on Linux distributions without GUI, so I decided that while I am creating my Vagrant Base Box with Ubuntu 14.04 Desktop I would document all the relevant steps next: Step 1: Create the Virtual Machine with Virtual Box - Install VirtualBox - Download Ubuntu ISO Install OpenSSH Server

Genetic Algorithm Tutorial Genetic Algorithms in Plain English Introduction The aim of this tutorial is to explain genetic algorithms sufficiently for you to be able to use them in your own projects. This is a stripped-down to-the-bare-essentials type of tutorial. I'm not going to go into a great deal of depth and I'm not going to scare those of you with math anxiety by throwing evil equations at you every few sentences. This tutorial is designed to be read through twice... so don't worry if little of it makes sense the first time you study it. (A reader, Daniel, has kindly translated this tutorial into German. (Another reader, David Lewin, has translated the tutorial into French. First, a Biology Lesson Every organism has a set of rules, a blueprint so to speak, describing how that organism is built up from the tiny building blocks of life. When two organisms mate they share their genes. Life on earth has evolved to be as it is through the processes of natural selection, recombination and mutation. And so on.

Whimsley Xubuntu on steroids! To me Voyager Live is a well decorated Xubuntu. I tried previously Voyager Live and it looked beautiful but I found it much less efficient than Xubuntu and felt, kind of defeats the purpose of XFCE distros. This was for Voyager spin of Xubuntu 12.04. However, the present release changed my impression and I'll tell you how. Voyager 14.04.1 is based on the latest LTS (3 years though) spin of Xubuntu and ships with Xfdesktop 4.11.6 running on XFCE 4.10 and Linux kernel 3.13.0. The release note states "Rodolphe Bachelart has announced the release of Voyager Live 14.04, a Xubuntu-based distribution with a customised Xfce 4.11 desktop and a large number of usability improvements designed for power users and multimedia fans. I downloaded the 983 MB 64 bit Voyager Live 14.04 ISO for this review. Aesthetics Though Xubuntu, Fedora and Debian XFCE along with others ship very good and usable spins of XFCE but a lot of user customization is required as far as aesthetics is concerned. Installation

…My heart’s in Accra What are hedge funds, and what social functions do they serve? | Dan Wang (Published in prettier formatting on Medium.) J. Pierpont Morgan died in 1913 with a fortune of about $1.5 billion in today’s dollars. For his sway over Wall Street he was nicknamed “Jupiter,” after the Roman king of the gods. In 2013, four hedge fund managers took home over $2 billion as income each, with the top manager pocketing $3.5 billion. It’s not always easy to tell. What should you know about the industry? What are hedge funds? Hedge funds are pooled-investment vehicles that are relatively unconstrained in their methods of generating returns. The hedge fund industry has about $4 trillion in assets under management, which is significant, but not so large that it can dictate to the rest of Wall Street. What makes a company a hedge fund? Hedge funds are legally prohibited from advertising themselves to the public, and are allowed only to raise funds from government-approved “accredited investors.” 2-and-20: The very high fees of hedge funds How well do hedge funds perform? A.W. 2. 3.