Hedonometer. How algorithms discern our mood from what we write online. Many people have declared 2020 the worst year ever. 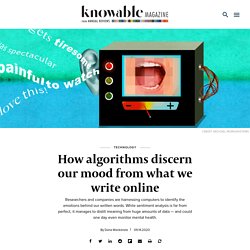 While such a description may seem hopelessly subjective, according to one measure, it’s true. That yardstick is the Hedonometer, a computerized way of assessing both our happiness and our despair. It runs day in and day out on computers at the University of Vermont (UVM), where it scrapes some 50 million tweets per day off Twitter and then gives a quick-and-dirty read of the public’s mood. According to the Hedonometer, 2020 has been by far the most horrible year since it began keeping track in 2008. The Hedonometer is a relatively recent incarnation of a task computer scientists have been working on for more than 50 years: using computers to assess words’ emotional tone. Sentiment analysis is allowing researchers to examine a deluge of data that was previously time-consuming and difficult to collect, let alone study, says Danforth.

Algorithm predicts mortality of Covid-19 patients from blood biomarkers. Algorithm devises synthetic contingency plans for Covid-19 drug. MIT's search and rescue algorithm could quickly find those lost at sea. The ocean can be a ferociously wild place, which makes locating lost people and objects a tall order for first responders. 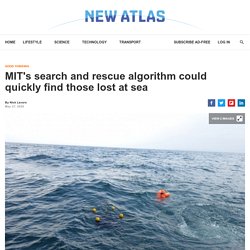 Researchers at MIT have developed a new algorithm that takes stock of ocean conditions to determine in real-time where these missing items and people are likely to appear, which could give the efficiency of search and rescue operations a big boost. Search and rescue teams combing the oceans today rely on models of ocean dynamics and weather forecasts to determine the best areas to focus their attention. But this is far from a perfect strategy, with the unpredictability of the ocean currents often leading the subject of the search along different paths to those originally predicted.

The MIT team set out to develop an improved method by focusing on what it refers to as hidden “traps,” where the forces of the ocean are likely to converge along with people or objects being taken along for the ride. An AI Algorithm Just Discovered Entirely New Antibiotics. A chemistry-combing algorithm uncovered a promising new antibiotic molecule called halicin.Researchers have spent tons of time and money searching for something to replace traditional antibiotics.Halicin worked well against three major resistant disease pathogens, including C. diff. 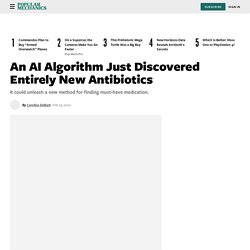 Researchers at MIT have used brute-force computer power and artificial intelligence to identify a potentially game-changing new antibiotic medication. Using machine learning to comb through millions of options can help scientists think outside the box both chemically and financially. AI bests humans at predicting repeat offenders among criminals. Computer algorithms can outperform people at predicting which criminals will get arrested again, a new study finds. 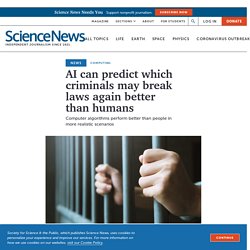 Risk-assessment algorithms that forecast future crimes often help judges and parole boards decide who stays behind bars (SN: 9/6/17). But these systems have come under fire for exhibiting racial biases (SN: 3/8/17), and some research has given reason to doubt that algorithms are any better at predicting arrests than humans are. One 2018 study that pitted human volunteers against the risk-assessment tool COMPAS found that people predicted criminal reoffence about as well as the software (SN: 2/20/18). How Algorithms Replace Your Brain. Dating apps are awful. But this algorithm offers just one match: your “backup plan.” Siena Streiber, an English major at Stanford University, wasn’t looking for a husband. 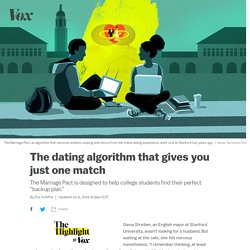 But waiting at the cafe, she felt nervous nonetheless. “I remember thinking, at least we’re meeting for coffee and not some fancy dinner,” she said. Manhattan Data Scientist Makes Sham Instagram Account to Get Free Food. A Manhattan data scientist is turning the social media influencer world on its head by revealing that he created a bot that not only runs a successful Manhattan-themed Instagram account on its own, but also automatically solicits meals from restaurants in exchange for posts. 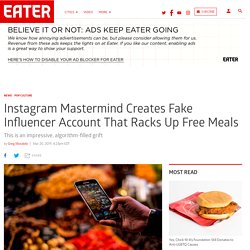 The bot-run account in question, @beautiful.newyorkcity, has shared over 600 photos of New York cityscapes — all reposted from other accounts, with attribution — as well as six “sponsored” posts promoting restaurants in Brooklyn and Manhattan. The bot’s creator, Chris Buetti, says he was inspired by @fuckjerry, the controversial, meme-stealing Instagram account run by Fyre Festival co-conspirator Elliot Tebele. Biased algorithms: here's a more radical approach to creating fairness.

Our lives are increasingly affected by algorithms. 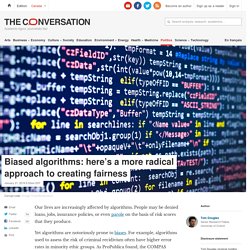 People may be denied loans, jobs, insurance policies, or even parole on the basis of risk scores that they produce. Yet algorithms are notoriously prone to biases. For example, algorithms used to assess the risk of criminal recidivism often have higher error rates in minority ethic groups. A Very Good Google Docs Plagiarism Checker Tool. Theonion. Theonion. Sports.theonion. The Hilarious (and Terrifying?) Ways Algorithms Have Outsmarted Their Creators. I Spend 9 Months Developing An Algorithm That Can Draw. Almost one year ago I started working on drawing algorithms soon after that I opened an experimental design studio LinesLab that explores algorithmic art and robotics. 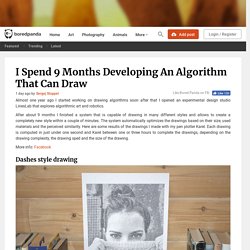 Show Full Text After about 9 months I finished a system that is capable of drawing in many different styles and allows to create a completely new style within a couple of minutes. MIT origami algorithm creates any 3D shape with minimal seams. Back in 1999, Erik Domaine was a PhD student who created an algorithm that determined the folding patterns necessary to turn a piece of paper into any 3D shape. 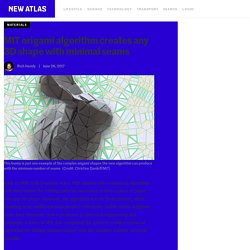 However, the algorithm was far from perfect, often resulting in an inefficient final product with many visible seams. Eighteen years later Demaine, now a professor of electrical engineering and computer science at MIT, has completed his quest to create a universal algorithm for folding origami shapes with the smallest number of seams possible. The Pentagon’s New Algorithmic Warfare Cell Gets Its First Mission: Hunt ISIS. Turning hours of drone video into actionable intelligence is just the start for the fast-moving machine-learning team. 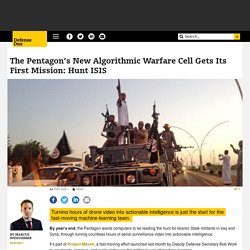 By year’s end, the Pentagon wants computers to be leading the hunt for Islamic State militants in Iraq and Syria, through turning countless hours of aerial surveillance video into actionable intelligence. It’s part of Project Maven, a fast-moving effort launched last month by Deputy Defense Secretary Bob Work to accelerate, improve, and put to wider use the military’s use of machine learning. “We have to tackle the problem a different way,” said Air Force Lt. Log In - New York Times. How a Math Algorithm Could Educate the Whole World — for Free. Po-Shen Loh: About three years ago I became the national coach of the United States International Math Olympian Team. I was very happy for a day thinking this is very interesting. But the next day I started to think that maybe I should do something with this.

And I decided that I wanted to focus not only on training an elite group of students but trying to do as much as I could to boost the baseline mathematics capability in this entire country. Unfortunately I had no money, no connections and only one person. So the only thing I knew was mathematics, algorithms and this probability and network theory. Our principle is that actually you could turn that smart phone into a virtual tutor which automates what a person would get if they hired a tutor. If we realize that what we're trying to build is this virtual tutor then you actually, again, can start to conceptualize well knowledge happens to be all of these concepts linked together in this network. The Stunning Elbphilharmonie Is What Happens When Algorithms Design a Concert Hall. The most interesting thing about Herzog and De Meuron’s newly opened concert hall, the Elbphilharmonie, isn’t its wave-like facade, which rises above the city of Hamburg, Germany.

Convict-spotting algorithm criticised. Image copyright Xi Zhang/Xi Zhang An experiment to see whether computers can identify criminals based on their faces has been conducted in China. Researchers trained an algorithm using more than 1,500 photos of Chinese citizens, hundreds of them convicts. They said the program was then able to correctly identify criminals in further photos 89% of the time. But the research, which has not been peer reviewed, has been criticised by criminology experts who say the AI may reflect bias in the justice system. "This article is not looking at people's behaviour, it is looking at criminal conviction," said Prof Susan McVie, professor of quantitative criminology at the University of Edinburgh. "The criminal justice system consists of a series of decision-making stages, by the police, prosecution and the courts.

A treasure hunter went missing in the Rocky Mountains, and a computer algorithm found him months later. When Randy Bilyeu disappeared, he was hunting for the Fenn Treasure, a chest allegedly filled with gold, precious stones, and jewelry, supposedly hidden in the Rocky Mountains north of Santa Fe, New Mexico. In 2010, millionaire art dealer (and former Vietnam fighter pilot) 79-year-old Forrest Fenn filled a bronze chest with rare metals, jewels, and artifacts, and then hid it in the mountains. Big data, Google and the end of free will. For thousands of years humans believed that authority came from the gods. Then, during the modern era, humanism gradually shifted authority from deities to people.

Future - Would you let an algorithm manage your relationships? How We Decided to Test Racial Bias in Algorithms. In 2014, former Attorney General Eric Holder wrote a letter to the U.S. Sentencing Commission asking them to study racial bias in risk scores. The RSA algorithm (or how to send private love letters) New algorithm helps machines learn as quickly as humans. An artificial intelligence breakthrough from the universities of New York, Toronto and MIT is showcasing the impressive ability of artificial intelligence to learn visual concepts in a single shot and manipulate them in human-like ways. It's time to shine a light on the unseen algorithms that power 'Big Brother' AI Algorithm Identifies Humorous Pictures. A Book from the Sky.

3D animation tech puts other peoples' words in celebrities' mouths. Researchers at the University of Washington (UW) recently demonstrated how 3D video images of Tom Hanks, Daniel Craig and several other celebrities could be created by piecing together still images and sound bites retrieved from the internet. They also showed how their algorithms could animate those digital models, getting them to say things that were actually said by someone else. The technology relies on advances in 3D face reconstruction, tracking, alignment, multi-texture modeling and puppeteering, which were developed by a research group led by UW assistant professor of computer science and engineering Ira Kemelmacher-Shlizerman.

The UW research team's latest advances include the ability to transfer expressions and the way a particular person speaks onto the face of someone else — for instance, mapping former president George W. Bayesian probability. The master algorithm is going to change life as we know it. Professor's algorithm writes technical reports, romance novels could be next. Google Inbox Suggests Replies for Incoming Email. What We Know About the Computer Formulas Making Decisions in Your Life. Algorithm. This "Psychic Robot" Can Read Your Mind. Computer algorithm created to encode human memories. New Neural Algorithm Can ‘Paint’ Photos In Style Of Any Artist From Van Gogh To Picasso.