Multidisiplinar Optimization. Knitectonics - Genetic Algorithm - Chapter VII. Geco+Galapagos Tutorials are in InfoBase. The XXL Workshop is an elective course held at the Faculty of Architecture of Delft University of Technology. 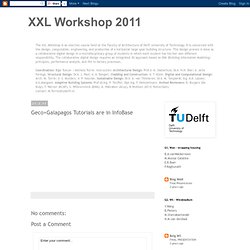 This week, we look at using Genetic Algorithms to solve geometric problems via Grasshopper’s built-in genetic algorithm engine, Galapagos. Genetic algorithms attempt to mimic the way lifeforms evolve over time, on the basis that if it’s good enough for creating all life as we know it, it’s probably a fairly good tool for helping us develop design solutions. There are two main things to consider when we are setting up a grasshopper model to use Galapagos. The first are the input parameters that we are going to use as genomes. Each genome is a value that controls certain aspects of the design – the height of a wall, for instance, the width of a window, the number of columns etc.

Galapagos will modify these values for us and attempt to find the ‘best’ solution. Indeed, if you’re thinking of using Galapagos you should probably leaf through the rest of David’s blog – he did write the thing, after all. Virtual Anechoic Chamber. Galapagas and GSA solver. It's still early stages of testing and development of some recent work I've been doing to enable access to GSA solver directly within Grasshopper (and importantly Galapagas). 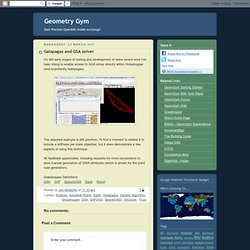 Evolutionary Principles applied to Problem Solving. There is nothing particularly new about Evolutionary Solvers or Genetic Algorithms. 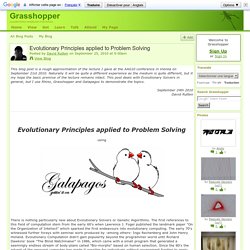 The first references to this field of computation stem from the early 60's when Lawrence J. Fogel published the landmark paper "On the Organization of Intellect" which sparked the first endeavours into evolutionary computing. The early 70's witnessed further forays with seminal work produced by -among others- Ingo Rechenberg and John Henry Holland. Evolutionary Computation didn't gain popularity beyond the programmer world until Richard Dawkins' book "The Blind Watchmaker" in 1986, which came with a small program that generated a seemingly endless stream of body-plans called "Bio-morphs" based on human selection.

Since the 80's the advent of the personal computer has made it possible for individuals without government funding to apply evolutionary principles to personal projects and they have since made it into the common parlance. Pros and Cons Firstly; Evolutionary Algorithms are slow. I Eat Bugs For Breakfast. Call for Galapagos submissions. Dear users, 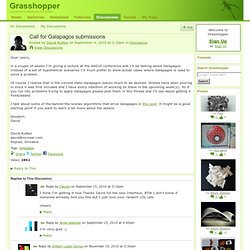 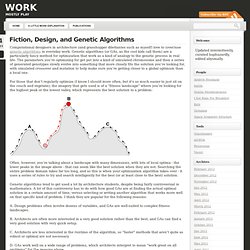 Genetic algorithms (or GAs, as the cool kids call them) are a particularly fancy method for optimization that work as a kind of analogy to the genetic process in real life. The parameters you're optimizing for get put into a kind of simulated chromosome and then a series of generated genotypes slowly evolve into something that more closely fits the solution you're looking for, with simulated crossover and mutation to help make sure you're getting closer to a global optimum than a local one.

For those that don't regularly optimize (I know I should more often, but it's so much easier to just sit on the couch and vegetate), the imagery that gets used is of a "fitness landscape" where you're looking for the highest peak or the lowest valley, which represents the best solution to a problem: A. B. C. D. E. F. To which I responded in the comments, Implementing a Genetic Algorithms in C# and. Figure 1 - Biological Chromosomes were the incentive for Genetic Algorithms One of the more interesting developments that has come out of the Artificial Intelligence world is the invention of Genetic Algorithms. 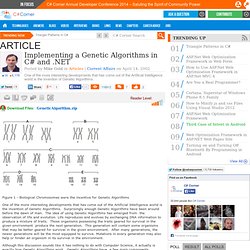 Projects_Propagating Figures. Introduction: A cognitive phenomenon, emergent subshapes, has been examined extensively in the last decade. 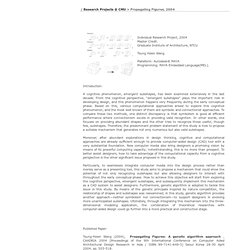 From the cognitive perspective, “emergent subshapes” plays the important role in developing design, and this phenomenon happens very frequently during the early conceptual phase. Based on this, various computational approaches arised to explore this cognitive phenomenon, and the most well known of them are symbolic and connectionist approaches. To compare these two methods, one distinct discrepancy is that symbolism is good at efficient performance where connectionism excels in providing valid recognition. In other words, one focuses on providing abundant shapes and the other tries to recognize those useful, though few, subshapes. Moreover, after abundant explorations in design thinking, cognitive and computational approaches are already sufficient enough to provide computer-aided design (CAD) tool with a very substantial foundation.

STRUCTURAL DNA. Deeper Research Radiolarians. Evolutionary Algorithms. This grasshopper definition was made when the Galapagos evolutionary solver was released for GH. 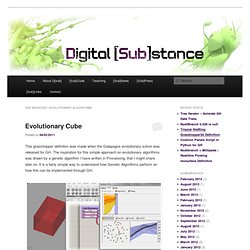