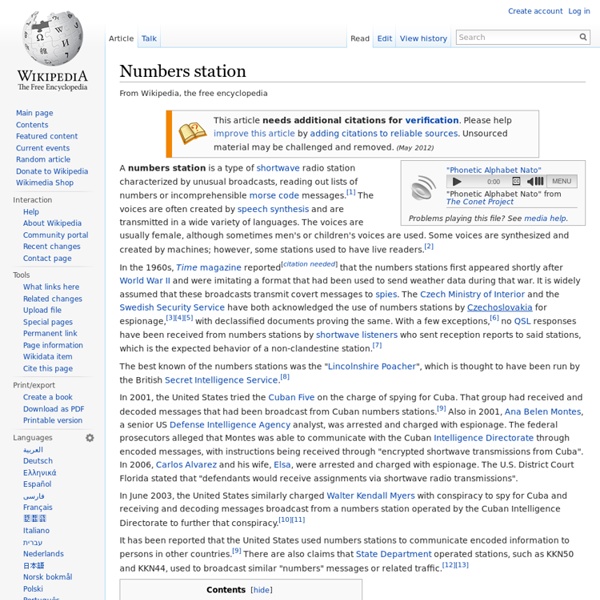 A numbers station is a type of shortwave radio station characterized by unusual broadcasts, reading out lists of numbers or incomprehensible morse code messages.[1] The voices are often created by speech synthesis and are transmitted in a wide variety of languages. The voices are usually female, although sometimes men's or children's voices are used. Some voices are synthesized and created by machines; however, some stations used to have live readers.[2] In June 2003, the United States similarly charged Walter Kendall Myers with conspiracy to spy for Cuba and receiving and decoding messages broadcast from a numbers station operated by the Cuban Intelligence Directorate to further that conspiracy.[10][11] §Suspected origins and use[edit] According to the notes of The Conet Project,[14][15] which has compiled recordings of these transmissions, numbers stations have been reported since World War I. Numbers stations are also acknowledged for espionage purposes in Robert Wallace and H. Related:  REF - Encryption Algorithms

The Conet Project: Ordering Information We are pleased to announce the re-release of The Conet Project: Recordings of Shortwave Numbers Stations in a special 5CD edition. "TCP / 1111" is a shrink wrapped package containing: The original 4 Conet Project CDs in their own quadruple Jewel Case. Three black and white post cards. One full color post card. The extended 80 page booklet in its own Jewel Case. Ordering The Conet Project / 1111: Our crowdfunding drive for The Conet Project / 1111 Edition is a success. You are now able to buy a physical copy of one of the new limited edition 5 CD sets from your local independent music retailer. Contacting Irdial You may email Irdial-Discs here: irdial [at] irdial [dot] com To communicate with us in private, please use our PGP public key. Journalists Here is the CONET Project Press Room. Trivia? * And it has made the global crowdsourcing information a simple matter. Cracking a Numbers Station Message Do you have programming skills and a love of all things crypto?

The spooky world of the 'numbers stations' Image copyright Thinkstock This is the era of hyper-tech espionage, encrypted emails and mindboggling cryptography. But you can hear a very old-fashioned form of espionage on shortwave radio. It is 13:03 on a Tuesday in a cramped room with some fairly advanced radio equipment. There is a small community of aficionados who believe messages like this are a throwback to the era of Cold War espionage. At the apex of the Cold War, radio lovers across the globe started to notice bizarre broadcasts on the airwaves. Encountering these shortwave radio messages, many radio hams concluded that they were being used to send coded messages across extremely long distances. The Lincolnshire Poacher was so named because of two bars from an English folk song of that name being used as an "interval signal". Media playback is unsupported on your device Times have changed and technology has evolved, but there's evidence that this old-fashioned seeming method of communication might still be used.

Socotra Socotra (Arabic: سُقُطْرَى‎ Suquṭra), also spelled Soqotra, is a small archipelago of four islands in the Indian Ocean. The largest island, also called Socotra, is about 95% of the landmass of the archipelago. It lies some 240 kilometres (150 mi) east of the Horn of Africa and 380 kilometres (240 mi) south of the Arabian Peninsula.[2] The island is very isolated and a third of its plant life is found nowhere else on the planet. It has been described as "the most alien-looking place on Earth". The island measures 132 kilometres (82 mi) in length and 49.7 kilometres (30.9 mi) in width.[3] Socotra is part of Yemen. Etymology[edit] In the notes to his translation of the Periplus, G.W.B. History[edit] Map of the Socotra archipelago There was initially an Oldoway (or Oldowan) culture in Socotra. Socotra appears as Dioskouridou ("of Dioscurides") in the Periplus of the Erythraean Sea, a 1st-century AD Greek navigation aid. The islands passed under the control of the Mahra sultans in 1511.

Usable but not Perfect - Public-key cryptography An unpredictable (typically large and random) number is used to begin generation of an acceptable pair of keys suitable for use by an asymmetric key algorithm. In an asymmetric key encryption scheme, anyone can encrypt messages using the public key, but only the holder of the paired private key can decrypt. Security depends on the secrecy of the private key. In the Diffie–Hellman key exchange scheme, each party generates a public/private key pair and distributes the public key. Public-key cryptography, also known as asymmetric cryptography, is a class of cryptographic algorithms which requires two separate keys, one of which is secret (or private) and one of which is public. Public-key algorithms are based on mathematical problems which currently admit no efficient solution that are inherent in certain integer factorization, discrete logarithm, and elliptic curve relationships. Message authentication involves processing a message with a private key to produce a digital signature.

Infosphere Infosphere is a neologism composed of information and sphere. The word refers to an environment, like a biosphere, that is populated by informational entities called inforgs. While an example of the sphere of information is cyberspace, infospheres are not limited to purely online environments. History of the Infosphere[edit] The first documented use of the word "InfoSphere" was a 1971 Time Magazine book review by R.Z. The Toffler definition proved prophetic as the use of "Infosphere" in the 1990s expanded beyond media to speculate about the common evolution of the Internet, society and culture. In his book "Digital Dharma," Steven Vedro writes, "Emerging from what French philosopher-priest Pierre Teilhard de Chardin called the shared noosphere of collective human thought, invention and spiritual seeking, the Infosphere is sometimes used to conceptualize a field that engulfs our physical, mental and etheric bodies; it affects our dreaming and our cultural life. Other Uses[edit]

Perfect but not Uusable - One-time pad Excerpt from a one-time pad The "pad" part of the name comes from early implementations where the key material was distributed as a pad of paper, so that the top sheet could be easily torn off and destroyed after use. For ease of concealment, the pad was sometimes reduced to such a small size that a powerful magnifying glass was required to use it. The KGB used pads of such size that they could fit in the palm of one's hand,[8] or in a walnut shell.[9] To increase security, one-time pads were sometimes printed onto sheets of highly flammable nitrocellulose, so that they could be quickly burned after use. There is some ambiguity to the term because some authors use the terms "Vernam cipher" and "one-time pad" synonymously, while others refer to any additive stream cipher as a "Vernam cipher", including those based on a cryptographically secure pseudorandom number generator (CSPRNG).[10] History of invention[edit] The next development was the paper pad system. Example[edit] Problems[edit]

Moravec's paradox Moravec's paradox is the discovery by artificial intelligence and robotics researchers that, contrary to traditional assumptions, high-level reasoning requires very little computation, but low-level sensorimotor skills require enormous computational resources. The principle was articulated by Hans Moravec, Rodney Brooks, Marvin Minsky and others in the 1980s. As Moravec writes, "it is comparatively easy to make computers exhibit adult level performance on intelligence tests or playing checkers, and difficult or impossible to give them the skills of a one-year-old when it comes to perception and mobility." Linguist and cognitive scientist Steven Pinker considers this the most significant discovery uncovered by AI researchers. In his book The Language Instinct, he writes: The main lesson of thirty-five years of AI research is that the hard problems are easy and the easy problems are hard. The biological basis of human skills[edit] As Moravec writes: See also[edit] Notes[edit] References[edit]

Serpent (cipher) Serpent is a symmetric key block cipher that was a finalist in the Advanced Encryption Standard (AES) contest, where it was ranked second to Rijndael. Serpent was designed by Ross Anderson, Eli Biham, and Lars Knudsen. The Serpent cipher is in the public domain and has not been patented. There are no restrictions or encumbrances whatsoever regarding its use. As a result, anyone is free to incorporate Serpent in their software (or hardware implementations) without paying license fees. Rijndael is a substitution-linear transformation network with ten, twelve, or fourteen rounds, depending on the key size, and with block sizes of 128 bits, 192 bits, or 256 bits, independently specified. The original Serpent, Serpent-0, was presented at the 5th workshop on Fast Software Encryption, but a somewhat tweaked version, Serpent-1, was submitted to the AES competition. The XSL attack, if effective, would weaken Serpent (though not as much as it would weaken Rijndael, which became AES).

Grey goo Grey goo (also spelled gray goo) is a hypothetical end-of-the-world scenario involving molecular nanotechnology in which out-of-control self-replicating robots consume all matter on Earth while building more of themselves,[1][2] a scenario that has been called ecophagy ("eating the environment").[3] The original idea assumed machines were designed to have this capability, while popularizations have assumed that machines might somehow gain this capability by accident. Definition[edit] The term was first used by molecular nanotechnology pioneer Eric Drexler in his book Engines of Creation (1986). In Chapter 4, Engines Of Abundance, Drexler illustrates both exponential growth and inherent limits (not gray goo) by describing nanomachines that can function only if given special raw materials: Drexler describes gray goo in Chapter 11 of Engines Of Creation: Early assembler-based replicators could beat the most advanced modern organisms. Risks and precautions[edit] Ethics and chaos[edit]

Twofish Twofish's distinctive features are the use of pre-computed key-dependent S-boxes, and a relatively complex key schedule. One half of an n-bit key is used as the actual encryption key and the other half of the n-bit key is used to modify the encryption algorithm (key-dependent S-boxes). Twofish borrows some elements from other designs; for example, the pseudo-Hadamard transform (PHT) from the SAFER family of ciphers. Cryptanalysis[edit] In 1999, Niels Ferguson published an impossible differential attack that breaks six rounds out of 16 of the 256-bit key version using 2256 steps.[2] As of 2000[update], the best published cryptanalysis on the Twofish block cipher is a truncated differential cryptanalysis of the full 16-round version. Bruce Schneier responds in a 2005 blog entry that this paper does not present a full cryptanalytic attack, but only some hypothesized differential characteristics: "But even from a theoretical perspective, Twofish isn't even remotely broken. See also[edit]

Why the future doesn't need us While some critics have characterized Joy's stance as obscurantism or neo-Luddism, others share his concerns about the consequences of rapidly expanding technology.[1] Summary[edit] Joy argues that developing technologies provide a much greater danger to humanity than any technology before it has ever presented. In particular, he focuses on genetics, nanotechnology and robotics. He argues that 20th century technologies of destruction such as the nuclear bomb were limited to large governments, due to the complexity and cost of such devices, as well as the difficulty in acquiring the required materials. He uses the novel The White Plague as a potential nightmare scenario, in which a mad scientist creates a virus capable of wiping out humanity. Joy also voices concern about increasing computer power. Criticisms[edit] Aftermath[edit] References[edit] Jump up ^ Khushf, George (2004). Further reading[edit] Messerly, John G. External links[edit]

Advanced Encryption Standard The Advanced Encryption Standard (AES), also referenced as Rijndael[4][5] (its original name), is a specification for the encryption of electronic data established by the U.S. National Institute of Standards and Technology (NIST) in 2001.[6] AES is based on the Rijndael cipher[5] developed by two Belgian cryptographers, Joan Daemen and Vincent Rijmen, who submitted a proposal to NIST during the AES selection process.[7] Rijndael is a family of ciphers with different key and block sizes. For AES, NIST selected three members of the Rijndael family, each with a block size of 128 bits, but three different key lengths: 128, 192 and 256 bits. AES has been adopted by the U.S. government and is now used worldwide. It supersedes the Data Encryption Standard (DES),[8] which was published in 1977. In the United States, AES was announced by the NIST as U.S. AES became effective as a federal government standard on May 26, 2002 after approval by the Secretary of Commerce. §Definitive standards[edit] .