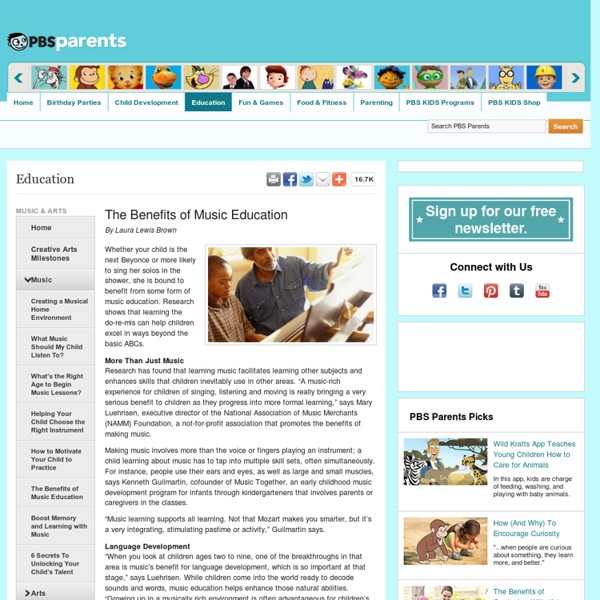 Whether your child is the next Beyonce or more likely to sing her solos in the shower, she is bound to benefit from some form of music education. Research shows that learning the do-re-mis can help children excel in ways beyond the basic ABCs. More Than Just Music Research has found that learning music facilitates learning other subjects and enhances skills that children inevitably use in other areas. “A music-rich experience for children of singing, listening and moving is really bringing a very serious benefit to children as they progress into more formal learning,” says Mary Luehrisen, executive director of the National Association of Music Merchants (NAMM) Foundation, a not-for-profit association that promotes the benefits of making music. Making music involves more than the voice or fingers playing an instrument; a child learning about music has to tap into multiple skill sets, often simultaneously. “Music learning supports all learning. Increased IQ A study by E.

Music can improve concentration in some children with ADHD From Rachmaninov to rock ’n’ roll, listening to music while studying may help some children with attention deficit hyperactivity disorder (ADHD). For some, music has similar positive effects to medication. The findings are part of a study on the effects of distractors on children with ADHD. A team of researchers, led by FIU Center for Children and Families Director William E.

The Importance of Music Education Why is Music Education Important? Spirit of Harmony Foundation is working to uniquely define the "case" for music education as a moral imperative for all people, including kids in low-income families and communities in which music education programs are not readily available. The case for music education consists of many threads, particularly: Music Education In Public Schools Gets A Passing Grade : The Record Numbers — they always look so solid, so reassuring, so — dare I say — hopeful? Earlier this week, the U.S. Department of Education issued a new report titled Arts Education In Public Elementary and Secondary Schools, 1999-2000 and 2009-10. "In the 2009-10 school year, music education was almost universally available in the nation's public elementary schools, with 94% of schools offering instruction that was designated specifically for music," the report states. "Music instruction was available in almost all public secondary schools," with the actual number given at 91%. Over the last decade, these numbers have remained surprisingly steadfast.

Enrst Strüngmann Forum - Language, Music, and the Brain - Photos Ernst Strüngmann Forum Music, Language, and the Brain A Mysterious Relationship Sunday Opening Session Click <<here>> for an index of all the images Schizophrenia Funding: the state of the art Cultural policy USA In a world mired in economic uncertainty and with cash for the arts disappearing, how do we argue for culture? By András Szántó. Features, Issue 214, June 2010Published online: 08 June 2010 Leading arts figures in the UK, including Tate director Nicholas Serota, National Portrait Gallery director Sandy Nairne and artist Grayson Perry, gather at the British Museum in support of the report "Cultural Capital: a Manifesto for the Future"

Singing in the classroom We all know that singing is good for us. It helps us remember things, it is good for our physical and mental wellbeing, it helps develop personal and social skills and it puts a smile on our face. So, if singing is so important, why do so many of us shy away from it in the classroom? It takes a little confidence and a bit of preparation but with these simple ideas and tips on how to get started you’ll soon be a singing class! Start the day by singing the register. Sing any notes you like or just make up some silly sounds with your voice. Music has big brain benefits compared to other leisure pursuits It turns out mom was right. Music lessons are good for you, and those benefits may last a lifetime. A recent study conducted by Brenda Hanna-Pladdy, a clinical neuropsychologist in Emory University School of Medicine's Department of Neurology, offers additional evidence that musical instrumental training, when compared to other activities, may reduce the effects of memory decline and cognitive aging. This is the second study published by Hanna-Pladdy, which confirms and refines findings from an original study published in Neuropsychology in 2011 that revealed that musicians with at least 10 years of instrumental musical training remained cognitively sharp in advanced age.

The Importance of Music Education - TheHumanist.com What if there was one activity that could benefit every student in every school across the nation? An activity that could improve grades and scores on standardized testing? An activity that would allow students to form lasting friendships? An activity that would help students become more disciplined and confident? Why Does Music Make Us Feel? As a young man I enjoyed listening to a particular series of French instructional programs. I didn’t understand a word, but was nevertheless enthralled. Was it because the sounds of human speech are thrilling? Not really. Speech sounds alone, stripped of their meaning, don’t inspire. We don’t wake up to alarm clocks blaring German speech.

Pros and Cons of Our Taxes Funding the Arts As a proponent of the free market the following article is not going to yield a slam-dunk case for art subsidies. If the free market fails in its production of art, it doesnt automatically follow that the government must influence the menu of available art by funneling money through an agency such as the NEA. I am a supporter of the arts, but I am not a supporter of government funding the arts.

Singing with Children I remember singing along with friends in my elementary school days. Teachers and students together began each day with singing. We learned about music from our music teacher, but we sang everywhere, in our classrooms and on the playground. One winter at recess, we stepped out on snow banks to sing into imaginary microphones, "I Wanna Hold Your Hand." We were the Beatles!

Even A Few Years Of Music Training Benefits The Brain Music has a remarkable ability to affect and manipulate how we feel. Simply listening to songs we like stimulates the brain’s reward system , creating feelings of pleasure and comfort. But music goes beyond our hearts to our minds, shaping how we think. Scientific evidence suggests that even a little music training when we’re young can shape how brains develop, improving the ability to differentiate sounds and speech. With education funding constantly on the rocks and tough economic times tightening many parents’ budgets, students often end up with only a few years of music education. Studies to date have focused on neurological benefits of sustained music training, and found many upsides.

20 Important Benefits of Music In Our Schools - National Association for Music Education (NAfME) 20 Important Benefits of Music In Our Schools This article original appeared on Bachelors Degree. Nearly everyone enjoys music, whether by listening to it, singing, or playing an instrument. But despite this almost universal interest, many schools are having to do away with their music education programs. This is a mistake, with schools losing not only an enjoyable subject, but a subject that can enrich students’ lives and education.