In the Digital Age, What Becomes of the Library? 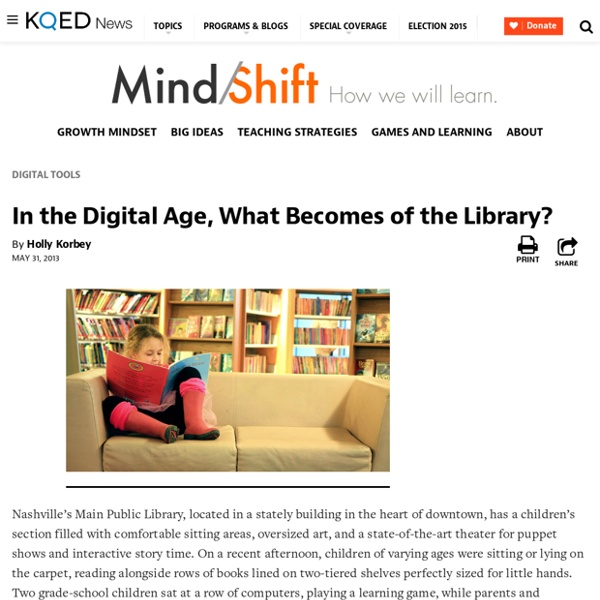 Nashville’s Main Public Library, located in a stately building in the heart of downtown, has a children’s section filled with comfortable sitting areas, oversized art, and a state-of-the-art theater for puppet shows and interactive story time. On a recent afternoon, children of varying ages were sitting or lying on the carpet, reading alongside rows of books lined on two-tiered shelves perfectly sized for little hands. Two grade-school children sat at a row of computers, playing a learning game, while parents and caregivers checked out books via computer. That timeless feeling, said library director Kent Oliver, is because reading, regardless of format, continues to be important. A recent Pew Internet study on parents, reading and libraries supports Oliver’s sentiment, showing the library’s traditional purpose – providing free reading material – is also its most popular: the main reason most parents (87 percent) go to libraries is to get books for their kids. But will that be changing? Related:  Library Advocacy • Library ReBoot

Using Social Media to Engage Teens in the Library “Brother Mike” Hawkins (at left) and YOUmedia’s Spoken Word team at the“Louder Than a Bomb” poetry competition in Chicago, March 2013.Photo courtesy of “Brother Mike” Hawkins. Taylor Bayless, a librarian with the Chicago Public Library’s YOUmedia youth learning space, runs a podcasting program for teens. Since Bayless had no previous experience with podcasts, she was “muddling through” the learning process along with the kids, teaching herself as she was teaching them. That was one message that came out of an hour-long chat on using social media in libraries, part of a month-long discussion series focusing on teens and the future of school and public libraries. Sponsored by the Young Adult Library Services Association (YALSA) and Connected Learning, an online learning network, the five programs that ran in May were all about how to engage that most fickle of consumers: teens. At DYN, Hawkins monitors teens’ social media use rather than polices.

The New School Library Without question, the Internet has changed the way we think and learn, and will continue to do so as our technology evolves. In particular, the ability to access enormous amounts of information at any time from almost any place is forcing schools to redefine the idea of a classroom and the way we approach teaching. It is also reshaping the notion of school library services — what libraries look like and how they and librarians best serve schools. Increasingly, we hear the questions: “Are libraries necessary today? Isn’t everything on the Internet? Can’t we use the library space for better purposes?” Clearly, a popular impression out there is that the plentiful free information on the open Internet will answer all academic needs. We respectfully disagree — and the research is on our side. Today’s independent school libraries have an increasingly different look and function from libraries of the past, even the recent past. The Human Touch The “Hum” of the Library Beyond the Print vs. Notes 1.

The Disinterested Leader: In the Library "Why aren't people interested in my agenda? Don't they know that it's the best for students and staff?" The questions aren't uncommon among librarians, as Doug's recent blog post highlights: The short answer: Figure out what the principal believes is important for you to do - then do it. This means creating a program that helps meet the goals and solve the problems in your school, NOT creating a program that meets AASL standards necessarily. It means deliberately learning what is important to your principal and then effectively communicating how you are contributing to those important issues. It's easy to misunderstand Doug's short answer...it seems a bit of a sell-out at first glance, doesn't it? In a previous blog entry, The Disinterested Leader, I shared the power of disinterest. The Crucial Conversations and Confrontations books advocate asking questiosn that that help us do a gut check: What do I really want for myself? 1) What do I really want for myself?

How To Survive the Zombie Librarian Apocalypse This weekend I had the honor of being they keynote speaker at the Alabama School Library Association Summer Conference in Birmingham, (not Mobile, but that's another story) Alabama. From start to finish, I was so impressed by the core group of librarians who run this state association and who put on a small, but impactful, conference that focuses on supporting new librarians while also challenging all of us grizzled veterans. This is truly a great group of folks and I am super grateful for having had the chance to walk among them for a few days. Anyway, as part of my trip to Alabama, I was given the task of talking to a group of new librarians (those with 0-3 years experience in the library) from around the state about how they should approach their new adventure. I'm not sure if others in the room noticed it at the time, but at that moment a giant, blinking lightbulb went on over my head. And thus, my keynote for the Alabama School Library Association was born. #brainz

What Does the Next-Generation School Library Look Like? At a time when public libraries are starting to offer everything from community gardening plots to opportunities to check out humans for conversations, some school libraries are similarly re-evaluating their roles and expanding their offerings. Case in point: Monticello High School in Charlottesville, Virginia. When librarian Joan Ackroyd arrived there four years ago, she found an environment very different from the “engaging, creative, fun” elementary and middle school libraries to which she was accustomed. “Its library was none of those things,” she recalls. “It was a traditional, quiet research space.” Ackroyd decided this wasn’t optimal. As her first step, she and her co-librarian at the time (music teacher Dave Glover), converted a storeroom into a technology lab. Teachers balked because the library was no longer quiet, but students liked it, and many at-risk students became frequent visitors. “Students work more productively in that kind of environment,” Ackroyd says.

Library Technology Guides: Key Resources in Library Automation Teacher Librarians Are Key to the Digital Shift | Pivot Points I hate textbooks. When I was a teacher librarian, I engaged in a Sisyphean cycle that included the ordering, distribution, inventory, transfer, repair, storage, and subsequent collection of heavy, sticky, and often obscenely vandalized tertiary sources. One of my first library clerks literally cried when it came time to circulate textbooks. I stoically comforted her as I put my shoulder to another heaving cart. Students checked out textbooks with the same grim resignation they might show when getting a shot. The Pivot: Digital Learning Resources At a recent CoSN (Consortium for School Networking) Conference, I participated in several discussions with content and educational service providers, not to mention district leaders. As traditional publishers rush into the digital marketplace, Washington State has adopted a K–12 open educational resources (OER) initiative. The Points Curation. Metadata. Learning objects. Just ask Sisyphus.

An Office Landscape Designed to Kill Boring Meetings | Wired Design Yves Béhar and Herman Miller are reinventing the office for a more connected generation. Designs become icons when they embody the time in which they were created. The Eames lounge chair represented a midcentury shift to a more casual home life when many people still held “tea times” in formal living rooms. The invention of the Aeron chair in the 1990′s marked an era when a company could show that it cared about its employees by giving them the pinnacle in ergonomic seating. “We’re trying to reflect horizontality and creativity,” says Béhar. When Béhar was assigned the project it came with a broad mandate—far beyond simply developing a cubicle system or a table to match his award winning Sayl chair. The team asked big questions about the changing nature of work. The process started with discussions on the psychology of creativity, including Mihaly Csikszentmihalyi’s research on “flow” states. Images Courtesy: Fuseproject