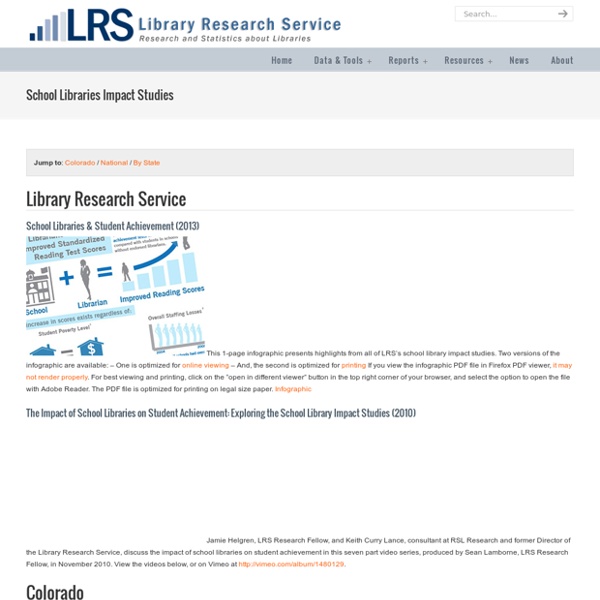 Library Research Service School Libraries & Student Achievement (2013) This 1-page infographic presents highlights from all of LRS’s school library impact studies. Two versions of the infographic are available: – One is optimized for online viewing – And, the second is optimized for printing If you view the infographic PDF file in Firefox PDF viewer, it may not render properly. For best viewing and printing, click on the “open in different viewer” button in the top right corner of your browser, and select the option to open the file with Adobe Reader. The PDF file is optimized for printing on legal size paper. The Impact of School Libraries on Student Achievement: Exploring the School Library Impact Studies (2010) Colorado Change in school librarian staffing linked with change in CSAP reading performance, 2005 to 2011 (2012) This report examines the change in CSAP reading scores of Colorado students, from 2005 to 2011, as influenced by changes in school library staffing levels. Lance, K.

Related:  Library Advocacy • Libraries and Librarians • Admin • It's Time to Proclaim What We Do!

Advocacy What Is Advocacy? Definitions developed by the AASL Advocacy Committee. Events School librarians are rising school leaders Librarians play an important role as schools make the digital transition School librarians are shaking off the decades-old stereotype that they are isolated from a school’s teachers, students, and classrooms. Today’s school librarians, according to a panel discussion that took place during Connected Educator Month and on Connected Librarians Day, are being tapped as influential school leaders with the power to help support the digital transition. “I see school librarians as school leaders, and I think it’s time for us to step up and be counted,” said Susan Ballard, former president of the American Association of School Librarians (AASL). This offers great potential for interconnected partnerships.

2013 Australian School Library Survey - Softlink Key findings link school library resourcing to literacy. Download the 2013 survey report. The 2013 Australian School Library Survey, conducted by Softlink on behalf of the Australian School Library industry, examines key trends and issues impacting school libraries. Standards for the 21st-Century Learner Skip to main content ALA User Menu Search form A Division of the American Library Association You are at: ALA.org » AASL » Learning Standards & Program Guidelines » Standards for the 21st-Century Learner Share this page: Discovering the Impact of Library Use and Student Performance Brian Cox is Manager Quality and Marketing, and Margie Jantti is University Librarian at the University of Wollongong Library. Key Takeaways Without a valid, reliable way to collect data from various library and enterprise systems, it's difficult to quantitatively assert how a library adds value. The University of Wollongong Library developed the Library Cube, a tailored database and reporting function that joins library usage data with student data, including demographic and academic performance information. Analysis of the resulting data reveals a strong correlation between students' grades and use of information resources the library provides. By providing access to information resources, academic libraries play a significant role in the student experience.

Guest Post: The 21st Century School Library: Literacy in a New Era Posted by Jonathan Martin under Uncategorized | Tags: 21st c. Libraries, St. Gregory | [2] Comments Looking for the Link Between Library Usage and Student Attainment In 2010, the University of Huddersfield shared results from its analysis of anonymised library usage data [1]. Data was analysed for over 700 courses over four years - 2005/6 — 2008/9; this included the number of e-resources accessed, the number of book loans and the number of accesses to the University Library. This investigation suggested a strong correlation between library usage and degree results, and also significant underuse of expensive library resources at both School and course level. At the time, it was highlighted that the correlation between library usage and grade had not yet been significance-tested and that it was not known whether the Huddersfield findings were an anomaly or the norm [2].