Why our Future Depends on Libraries, Reading & Daydreaming 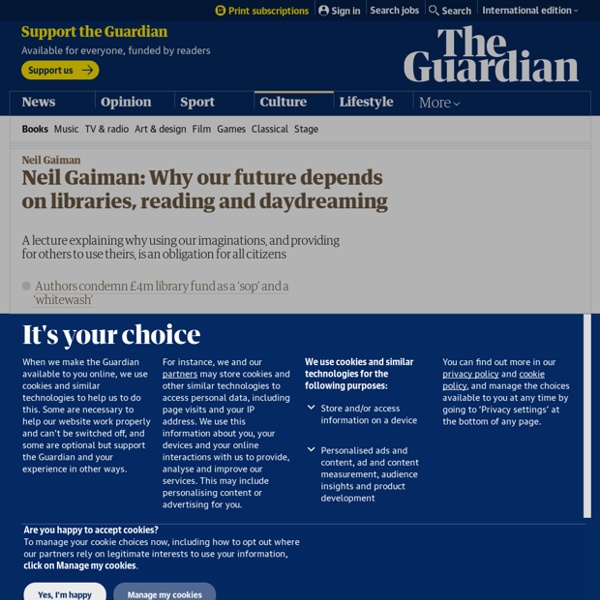 It’s important for people to tell you what side they are on and why, and whether they might be biased. A declaration of members’ interests, of a sort. So, I am going to be talking to you about reading. I’m going to tell you that libraries are important. I’m going to suggest that reading fiction, that reading for pleasure, is one of the most important things one can do. I’m going to make an impassioned plea for people to understand what libraries and librarians are, and to preserve both of these things. And I am biased, obviously and enormously: I’m an author, often an author of fiction. So I’m biased as a writer. And I’m here giving this talk tonight, under the auspices of the Reading Agency: a charity whose mission is to give everyone an equal chance in life by helping people become confident and enthusiastic readers. And it’s that change, and that act of reading that I’m here to talk about tonight. It’s not one to one: you can’t say that a literate society has no criminality.

It’s Time to Rethink How We Are Educating Our Children In Brief On the whole, the way we educate students hasn't gotten a major upgrade in more than a century. Technology has both revolutionized what we need to teach to children, but also the capabilities that we have at our disposal to teach. Educating for the Future Elon Musk seems to be making headlines every day with his spaceships and solar panels and gigafactories and colonies on mars and secret tunnels and AI labs and self-driving cars. Expressions & Sayings Index If you prefer to go directly to the meaning and origin of a specific expression, click on its relevant entry in the alphabetical list below. Use this alphabet to speed up your search: A B C D E F G H I J K L M N O P Q R S T U V W X Y Z

The Mind of Marc Andreessen On a bright October morning, Suhail Doshi drove to Silicon Valley in his parents’ Honda Civic, carrying a laptop with a twelve-slide presentation that was surely worth at least fifty million dollars. Doshi, the twenty-six-year-old C.E.O. of a data-analytics startup called Mixpanel, had come from San Francisco to Sand Hill Road in Menlo Park, where many of the world’s most prestigious venture-capital firms cluster, to pitch Andreessen Horowitz, the road’s newest and most unusual firm. Inside the offices, he stood at the head of a massive beechwood conference table to address the firm’s deal team and its seven general partners—the men who venture the money, take a seat on the board, and fire the entrepreneur if things go wrong.

9 infographics that promote reading In this post you’ll see the most convincing infographics that encourage to read, and raise awareness of the importance of reading. Reading is a privilege, but many people think it’s like nothing more than a duty. Well, even if it’s a duty, it still brings this nice warm feeling of getting smarter and smarter with every page. In times of the internet, with its distractions and information overload, it’s harder and harder to find time and attitude to do such an easy thing as opening a book.

Philosophy can Teach what Google can’t – & Ireland Knows it At the controls of driverless cars, on the end of the telephone when you call your bank or favourite retailer: we all know the robots are coming, and in many cases are already here. Back in 2013, economists at Oxford University’s Martin School estimated that in the next 20 years, more than half of all jobs would be substituted by intelligent technology. Like the prospect of robot-assisted living or hate it, it is foolish to deny that children in school today will enter a vastly different workplace tomorrow – and that’s if they’re lucky. Far from jobs being brought back from China, futurologists predict that white-collar jobs will be increasingly outsourced to digitisation as well as blue-collar ones. How should educationalists prepare young people for civic and professional life in a digital age? Luddite hand-wringing won’t do.

5 Reasons You Need Fiction I’ve heard pastors and longtime Christians argue against reading fiction since it’s “not true.” But great literature can be an avenue of profound blessing and an ally to teach us to anticipate the kingdom of God in all of life. If we’re moved when we come across an ancient oak swaying beside a brook in a sunlit valley, we don’t immediately try to justify its existence. If we’re sensible, we don’t think, You know, this tree would be much better if it had a Bible verse carved into it. We let it be, and we praise God for it. It’s like this with stories—they’re best enjoyed at their natural best. Robots Learn the Basic Algorithm that Underpins Human Intelligence? Theory of Connectivity The human brain is the most sophisticated organ in the human body. The things that the brain can do, and how it does them, have even inspired a model of artificial intelligence (AI). Now, a recent study published in the journal Frontiers in Systems Neuroscience shows how human intelligence may be a product of a basic algorithm.