10 Little Habits that Steal Your Happiness 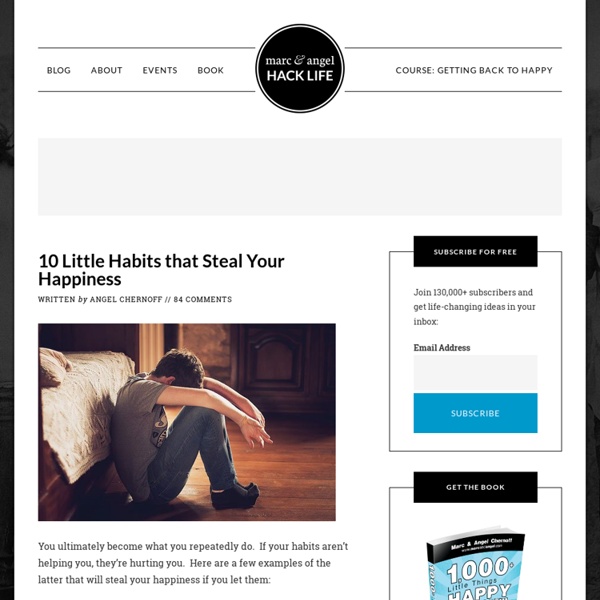 You ultimately become what you repeatedly do. If your habits aren’t helping you, they’re hurting you. Here are a few examples of the latter that will steal your happiness if you let them: 1. Focusing on everyone’s story except your own. Don’t be so satisfied with the success stories of others and how things have gone for them that you forget to write your own. If you want your life story to soar to new heights, you’ve got to clear a path, reduce the time-sinks and burdens weighing you down, and pick up the things that give you wings. 2. Don’t buy into the myth of the perfect moment. Your ability to grow to your highest potential is directly related to your willingness to act in the face of imperfection. 3. Work without interest is imprisonment. Think about it. Bottom line: Interest in your work puts quality in your output and happiness in your mind. 4. As Martin Luther King Jr. so profoundly said, “Darkness cannot drive out darkness; only light can do that. 5. 6. 7. 8. 9. 10. Related

The magic EMP-proof box Even though U.S. scientists have known about electromagnetic pulses for quite some time – and, in fact, intentionally created them in the late 1950s and early 1960s during the Cold War – it’s been more recently that EMPs have entered the conversation for ordinary Americans. There is rising concern that a rogue nation or terrorist organization could seriously disrupt our power grids by detonating a nuclear weapon high above the United States or setting off an e-bomb that could do much damage on a more local level. So isn’t it strange that a device with the capability of blocking or at least significantly reducing the effects of an EMP was invented prior to the Civil War?

10 Simple Habits to Help You Become Happier According to the 2013 World Happiness Report, America is considered the 17th happiest country in the world. However, America is one of the few nations with freedom, equal rights and wealth. Why aren’t we happier? Start your journey to a happier you by incorporating these 10 easy habits into your life. 1.

$300 underground greenhouse grows produce year-round, even in severe climates (NaturalNews) With staggering food prices and shortages looming, there's no better time to grow your own produce. Sadly, most greenhouses are expensive to build and impractical to heat during cold, wintery conditions. Thankfully, a solution is found with the Walipini. Developed for South American mountainous regions over twenty years ago, it allows edibles to be grown year-round - even in the most inhospitable weather. As an added bonus, it's also outrageously inexpensive to construct.Known as a pit or underground greenhouse, the Walipini utilizes the advantages of passive solar heating along with earth sheltering properties. The structure makes use of thermal mass energy, creating a highly efficient and cost effective method for heating the interior.

7 Harsh Truths That Will Improve Your Life Truth hurts, but someone has to say it. Your life is what you make of it and the only person who can help you is yourself. If you’re ready to take personal responsibility and improve your life, I invite you to apply these seven harsh truths today.

Awakening: The Next Step 5th June 2015 By Mary Batson Guest Writer for Wake Up World 11 Practices That Will Make You Instantly More Positive - Alycia Hall - Vancouver Life Coach and Coaching Services - Alycia Hall – Vancouver Life Coach and Coaching Services Feeling positive doesn’t have to be the result of your external circumstances. You can learn to cultivate positivity anytime as long as you’re committed to it. Here are 11 practices that will make you instantly more positive! The Only Way Forward In 2015 By Brandon Turbeville In the year 2015, America and the rest of the world finds itself at a crossroads. The time is fast approaching when the world’s population will receive the final choice between a move toward true freedom or the clampdown of total oppression. Throughout recorded history, tyrannies have arisen and morphed into other forms with the end result being the creation and maintenance of a permanent worldwide oligarchy that is attempting to ensure the end of all independent thought and action. This oligarchy has maintained its control by a number of different methods, the concept of “divide and conquer” being one of the most important in its arsenal.

Color Psychology by David Johnson Like death and taxes, there is no escaping color. It is ubiquitous. Last Chance Saloon – Gonna Step Up? 5th July 2015 By Zen Gardner Contributing Writer for Wake Up World This is it, folks. 10 Sentences That Can Change Your Life for The Better The power of a single sentence is tremendous.A single sentence can either make your day or in the same time ruin somebody’s day. It can change your mood. Just a few words put together, yet they make such big impact. But there are few sentences that can inspire us to change our life for the better.

Thomas Deegan: Amended Complaint To Restore Freedom Update (9/15/2015): For some reason, I can not find this court case on Pacer.gov. However, I did find it at courtswv.gov. If anyone finds it on Pacer.gov, please let me know by sending me an email. Thomas Deegan and Phillip Hudok and their team have been working hard to expose the criminal activities of the UNITED STATES, a FOREIGN corporation located in Washington D.C., also known as the District of Columbia, another foreign corporation. Anyone who cares about his or her freedom, sovereignty, and the future of humanity should support Thomas Deegan and Phillip Hudok and share their information to the world.