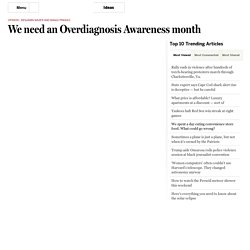 We should designate December as Cancer Overdiagnosis Awareness month, because a lot of cancers diagnosed by screening tests will never kill you. Through decades of advocacy by patients, family members, and doctors, the public has never been more aware of the dangers of slow-growing, yet sometimes deadly cancers like thyroid, breast, and prostate cancer. Newer, more sensitive tests are promoted to encourage early detection and treatment. These interventions, it is said, “save lives.”

Primary Care Physicians' Action Plans for Responding to Results of Screening Tests Based on the Concept of Quaternary Prevention. CMPA - The right test at the right time: Striking the proper balance. Originally published September 2014 / Revised April 2017 P1403-3-E In an era of fiscal prudence, combined with ongoing efforts to improve the safety of care, the efficient and effective utilization of healthcare resources remains a priority for governments, health authorities, administrators, and healthcare providers. 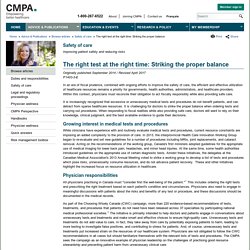 Within this context, physicians must reconcile their obligation to act fiscally responsibly while also providing safe care. It is increasingly recognized that excessive or unnecessary medical tests and procedures do not benefit patients, and can detract from sparse healthcare resources. It is challenging for doctors to strike the proper balance when ordering tests and carrying out procedures.

When responding to fiscal realities while also providing safe care, doctors will want to rely on their knowledge, clinical judgment, and the best available evidence to guide their decisions. Growing interest in medical tests and procedures. Five years wisely: A look at Choosing Wisely's effort to reduce unnecessary medical care - HealthNewsReview.org. Do you really need a CT scan for a headache? 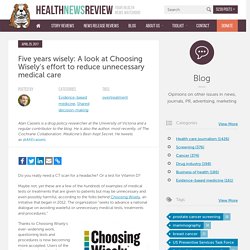 Or a test for Vitamin D? Maybe not, yet these are a few of the hundreds of examples of medical tests or treatments that are given to patients but may be unnecessary and even possibly harmful, according to the folks behind Choosing Wisely, an initiative that began in 2012. The organization “seeks to advance a national dialogue on avoiding wasteful or unnecessary medical tests, treatments and procedures.” Elsevier: Article Locator. Choosing Wisely Infographic Update0317. How one pediatric hospital targeted unnecessary care—and saved $1 million.

California-based Children's Hospital of Orange County (CHOC), in a partnership with Rady Children's Hospital-San Diego, is working on a population health initiative that creates evidence-based guidelines to reduce inefficiency and improve quality of care. 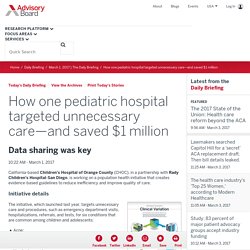 Initiative details The initiative, which launched last year, targets unnecessary care and procedures, such as emergency department visits, hospitalizations, referrals, and tests, for six conditions that are common among children and adolescents: The effect of a test ordering software intervention on the prescription of unnecessary laboratory tests - a randomized controlled trial. Informatics has undoubtedly changed the way societies live, socialize, learn, work, and deal with healthcare. 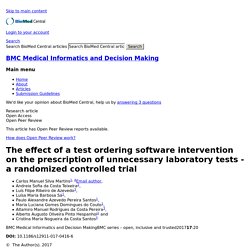 We now live in a period of increasing concern about the excessive presence of medicine in our lives [1, 2, 3]. When inefficient software is combined with a nonevidence-based medical practice, there is the risk of patient harm, significant impact to quality of life, and damage to the healthcare system due to unnecessary costs. The implementation of electronic health records (EHR) has both potential benefits and drawbacks [4]. Among the benefits, the prevention of medical errors and the promotion of patient safety has often been mentioned and confirmed in clinical practice [4, 5, 6]. The Top 20 MVPs (Most Valuable Pills) of All Time. “The young physician starts life with 20 drugs for each disease, and the old physician ends life with one drug for 20 diseases.” 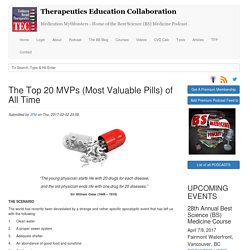 Sir William Osler (1849 – 1919) The world has recently been devastated by a strange and rather specific apocalyptic event that has left us with the following: Tackling Wasteful Spending on Health - en. Overdiagnosis – Norwegian general practitioners show the way. The position paper on overdiagnosis from the Norwegian College of General Practice is the first of its kind to be adopted by a national medical college. 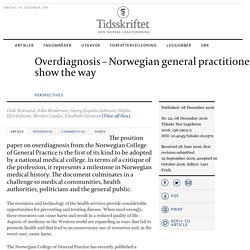 In terms of a critique of the profession, it represents a milestone in Norwegian medical history. The document culminates in a challenge to medical communities, health authorities, politicians and the general public. The resources and technology of the health services provide considerable opportunities for preventing and treating disease. The Strategy That Will Fix Health Care. In health care, the days of business as usual are over. 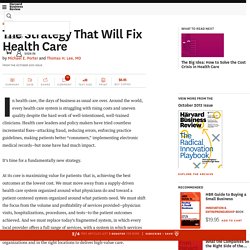 Around the world, every health care system is struggling with rising costs and uneven quality despite the hard work of well-intentioned, well-trained clinicians. Health care leaders and policy makers have tried countless incremental fixes—attacking fraud, reducing errors, enforcing practice guidelines, making patients better “consumers,” implementing electronic medical records—but none have had much impact. It’s time for a fundamentally new strategy. At its core is maximizing value for patients: that is, achieving the best outcomes at the lowest cost.

We must move away from a supply-driven health care system organized around what physicians do and toward a patient-centered system organized around what patients need. FPs Can Shape Social Determinants of Health Outside Clinic : AAFP Leader Voices. Four little words guaranteed to make physicians slightly uncomfortable are "social determinants of health. 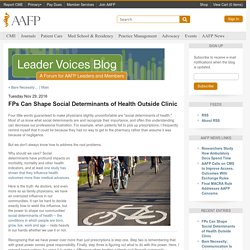 " Most of us know what social determinants are and recognize their importance, and often this understanding can decrease our professional frustration. For example, when patients fail to pick up prescriptions, I frequently remind myself that it could be because they had no way to get to the pharmacy rather than assume it was because of negligence. Heterogeneity in Treatment Effects and Choosing Wisely. 'Risk-sharing' at centre of Alberta's modified doctor pay deal - Edmonton. Amendments to the Alberta physician compensation agreement have financial implications if the amount set aside to pay doctors is exceeded in the next two years. 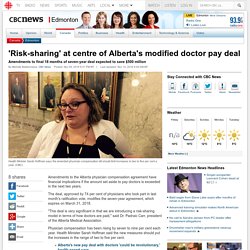 The deal, approved by 74 per cent of physicians who took part in last month's ratification vote, modifies the seven-year agreement, which expires on March 31, 2018. "This deal is very significant in that we are introducing a risk-sharing model in terms of how doctors are paid," said Dr. Padraic Carr, president of the Alberta Medical Association. Study shows doctors defy recommendations, still order imaging for back pain. Many doctors who order CT or MRI scans for patients with low back pain do so fearing that patients will be upset if they do not get imaging and because there is too little time to explain the risks and benefits of the tests, a new study found. The Choosing Wisely campaign, launched by the American Board of Internal Medicine in 2012, recommends against imaging scans for low back pain unless there are specific “red flags.”

But a study earlier this year found that almost a third of lumbosacral magnetic resonance imaging (MRI) scans in the Department of Veterans Affairs (VA) were “inappropriate,” the authors note. “Overuse of diagnostic tests is a common problem in healthcare as a whole, and affects both the VA and private-sector settings,” said coauthor Dr. Medicine's ethical responsibility for health care reform. Toward a sustainable and wise healthcare approach: potential contributions from hospital Internal Medicine Departments to reducing inappropriate medical spending. Introduction According to the latest data from the Ministry of Health, in Italy, over the past ten years health spending has increased from 76 to slightly less than 113 billion euro, with a growth of approximately 37 billion euro.

Government data for the year 20111 have shown that Italian public healthcare spending is equivalent to 7.1% of gross domestic product (GDP), and 1842 euro per capita per year. In a comparison between Italy and the European Union, the incidence of public health expenditure on GDP in the year 2009 was 7.3%, compared to 8.2% reported in Europe, highlighting the fact that on average, in Italy, we spend less on healthcare. A Program to Prevent Catheter-Associated Urinary Tract Infection in Acute Care. Rita Redberg: an unwavering campaigner against the harms of too much medicine. How did JAMA Internal Medicine’s editor become driven by the importance of evidence in healthcare?

Jeanne Lenzer found out “We have been told for decades now that detecting cardiac disease early is better than waiting for symptoms to appear, which on the surface sounds reasonable. However, years of experience belies this supposed axiom, and in fact some screenings, in the guise of ‘early detection,’ can be downright dangerous,” the US cardiologist Rita Redberg wrote last month in the Wall Street Journal, in just one recent example of her attempts to educate the public on the importance of evidence to inform healthcare and the perils of too much medicine.1. CMAJ Mobile. Roger Collier, CMAJ July 20, 2016 It began in the United States in 2012.

mBiosphere: And now for something completely different: optimistic news from the world of antibiotic stewardship. There’s no way to avoid the news of a growing concern for drug-resistant infections. In both life-threatening and relatively superficial infections, the ability to successfully treat microbial infections with antimicrobials is decreasing.

Our only recourse is to use the drugs we have carefully while researchers hunt for new drugs that must pass the stringent FDA guidelines before they can be used clinically. Recommendations on routine screening pelvic examination. Big benefits by radiologist review of—and consultation over—imaging orders. Giving radiologists more of a say in accepting, rejecting or changing referrers’ high-end imaging orders can significantly lift patient safety, cut costs and right-size resource allocation, according to a study conducted at Wilmington, Del. -based Christiana Care Health System and published online June 18 in the Journal of the American College of Radiology. Effect of Behavioral Interventions on Inappropriate Antibiotic Prescribing Among Primary Care Practices: A Randomized Clinical Trial.

Take Back Health: Join the Right Care Alliance. NHS Scotland: Realistic Medicine. Effectiveness of interventions designed to reduce the use of imaging for low-back pain: a systematic review. Choosing Wisely: setbacks and progress. Despite questions about its effectiveness the campaign is beginning to change attitudes, Jeanne Lenzer reports. Could bedside manner cut extra CT scans? Strengthening the doctor-patient relationship can help reduce unwarranted CT scans and their growing cost, researchers report. A Top-Five List for Emergency Medicine:  A Pilot Project to Improve the Value of Emergency Care. Accepted for Publication: June 19, 2013. How to make less more: empathy can fill the gap left by reducing unnecessary care. Controlling Waste: What's in it for Us? Responding to the Challenge of Overdiagnosis.

Medical Reversal: Why We Must Raise the Bar Before Adopting New Technologies. Disease definitions linked to pharmaceutical companies. A few weeks ago, ABC Radio aired a frightening item stating one in 10 Australians has “chronic kidney disease”, CKD, and most don’t know they have it. The story prominently featured fear of early death, and the salutary tale of a young man who belatedly discovered advanced kidney disease needing medical attention.