The SAMR Ladder Through the Lens of 21st Century Skills 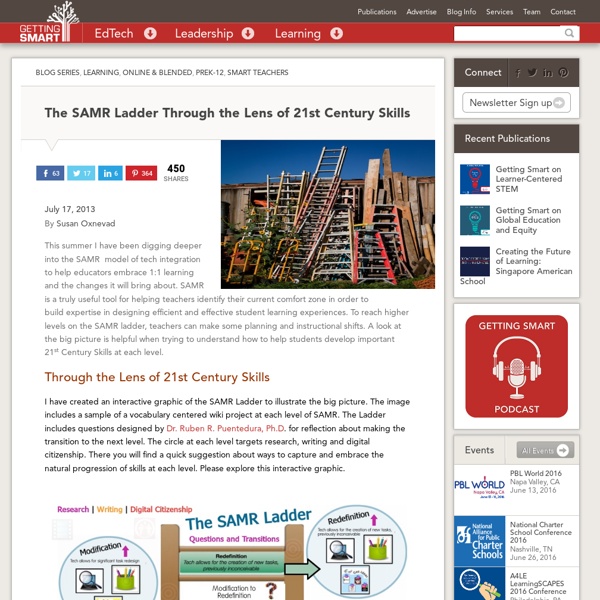 This summer I have been digging deeper into the SAMR model of tech integration to help educators embrace 1:1 learning and the changes it will bring about. SAMR is a truly useful tool for helping teachers identify their current comfort zone in order to build expertise in designing efficient and effective student learning experiences. To reach higher levels on the SAMR ladder, teachers can make some planning and instructional shifts. A look at the big picture is helpful when trying to understand how to help students develop important 21st Century Skills at each level. Through the Lens of 21st Century Skills I have created an interactive graphic of the SAMR Ladder to illustrate the big picture. Final Thoughts The learning that occurs as teachers climb up the SAMR ladder is what will eventually lead to successful lesson design.

CCA Crowdfunding - What does the SEC's historic action mean to YOU? Two days ago the US Securities and Exchange Commission (SEC) made one of the largest changes to securities regulation in nearly 80 years. US private companies and entrepreneurs that need to raise capital, will now be able to market their company's investment opportunity publicly to "accredited investors" (individuals with over $1M in liquid net worth or incomes over $200,000/year) via social media, print materials, email and other means. This is a huge change. Until 48 hours ago private companies were prohibited from saying anything publicly about raising capital and all solicitation had to be done in private.

Using SAMR to Teach Above the Line - Getting Smart by Susan Oxnevad - 1:1 program, Apple, edchat, EdTech, SAMR, technology For as long as I can remember I have been an advocate for helping teachers understand the stages of technology integration to help them effectively use tech as a tool for learning. I’ve adopted a few different tech integration models over the years, discussed the ideas with administrators for use as a starting point for tech integration, and kept the ideas front of mind as I invent and discover new ways for using technology as a tool for learning. Discussing the stages of tech integration has led to some thought provoking and inspiring conversations, but the ideas have not gained a lot of momentum in my face-to-face teaching environment until now. As many districts jump on board with 1:1 implementation, Apple’s use of the SAMR model as a framework for tech integration presents a consistent, clear and powerful message that is spreading!

That Time When SAMR Gets Us In To Trouble - Drape's Takes There’s a lot of talk out there about SAMR these days (the model, not the rifle, although both are kind of cool). See what I mean? Combined with other models, you might even end up with this: Or this: Problems occur, however, when educators instinctively attempt to the climb the hierarchical ladder. In one such moment, Susan Oxnevad energetically wrote: In Response to “Redefinition” There have been a number of posts circulating over the past few weeks about Dr. Ruben Puentedura’s SAMR model. I’ve been reading closely as I plan/hope/might incorporate it into my upcoming Leading Future Learning presentation. I like the SAMR model for two reasons. First.

Accelerating change In futures studies and the history of technology, accelerating change is a perceived increase in the rate of technological (and sometimes social and cultural) progress throughout history, which may suggest faster and more profound change in the future. While many have suggested accelerating change, the popularity of this theory in modern times is closely associated with various advocates of the technological singularity, such as Vernor Vinge and Ray Kurzweil. Early theories[edit] In 1938, Buckminster Fuller introduced the word ephemeralization to describe the trends of "doing more with less" in chemistry, health and other areas of industrial development.[1] In 1946, Fuller published a chart of the discoveries of the chemical elements over time to highlight the development of accelerating acceleration in human knowledge acquisition.[2] In 1958, Stanislaw Ulam wrote in reference to a conversation with John von Neumann:

ACOT2 ACOT2 has identified six design principles for the 21st century high school: Understanding of 21st Century Skills and Outcomes Establishes as a baseline that educators, students and parents must be well versed in the 21st century skills that students need to acquire to be successful. Teachers should be able to make relevant and useful choices about when and how to teach them, and whether or not students are making progress toward their personal demonstration of accomplishment. Rethinking what we teach must come before we can rethink how we teach. New Padagogy Wheel Helps You Integrate Technology Using SAMR Model Sometimes a visual guide comes along and it just makes total sense. That’s how I felt about Allan Carrington’s clever ‘Padagogy Wheel‘ which we featured on Edudemic last week. Check out the previous version then view the one below to see the differences.

Corporate Lifecycles: Modelling the Dynamics of Innovation and Its Support Infrastructure Introduction Although the effects of leadership and culture on innovation are well known, and various factors that influence innovation have been examined extensively in literature, a consistent model explaining the relationships between leadership, culture, and innovation is lacking. Additionally, the characteristics of the evolutionary change throughout the corporate lifecycle and the constituent individual phases delivering the innovation are poorly understood. At the core of this article is a model that incorporates the effect of leadership and organizational culture upon the evolution of innovation during the firm’s market lifecycle.