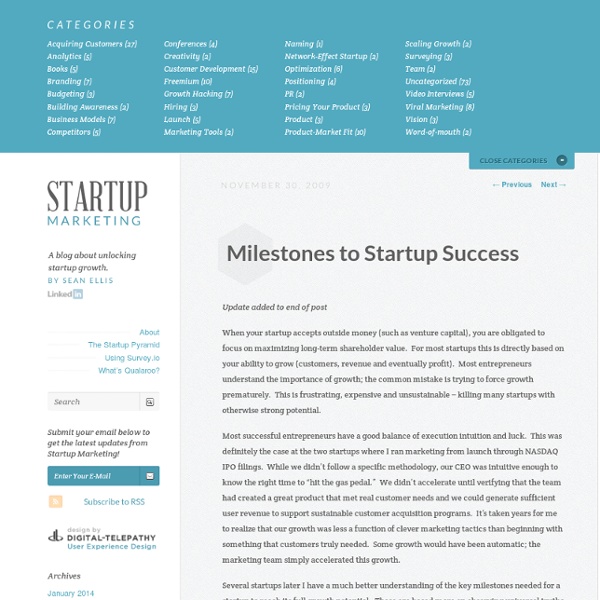 Update added to end of post When your startup accepts outside money (such as venture capital), you are obligated to focus on maximizing long-term shareholder value. For most startups this is directly based on your ability to grow (customers, revenue and eventually profit). Most entrepreneurs understand the importance of growth; the common mistake is trying to force growth prematurely. This is frustrating, expensive and unsustainable – killing many startups with otherwise strong potential. Most successful entrepreneurs have a good balance of execution intuition and luck. Several startups later I have a much better understanding of the key milestones needed for a startup to reach its full growth potential. Day 1: Validate Need for Minimum Viable Product (MVP) Before any coding begins it is important to validate that the problem/need you are trying to solve actually exists, is worth solving, and the proposed minimum feature set solves it. Where’s the Love? Metrics Start Charging Driving Growth

The Yo-Yo Life of a Tech Entrepreneur This is a guest post by Mark Suster, a 2x entrepreneur who has gone to the Dark Side of VC. He started his first company in 1999 and was headquartered in London, leaving in 2005 and selling to a publicly traded French services company. He founded his second company in Palo Alto in 2005 and sold this company to Salesforce.com, becoming VP Product Management. He joined GRP Partners in 2007 as a General Partner focusing on early-stage technology companies. TechCrunch Europe ran an article in November of last year that European startups need to work as hard as those in Silicon Valley and I echoed the sentiment in my post about the need for entrepreneurs to be maniacal about their businesses if one wants to work in the hyper competitive tech world. Of course articles like these are going to inflame people because not everybody who is running their own business (or aspires to) wants to believe that you need to go all out to compete and win on a global scale. I was now 33 years old.

Customer Service Matters for Mission Critical - Continuations Customer Service Matters for Mission Critical Saturday night I arrived late at our house having taken our older son to his first tennis “tournament.” Everyone else was already asleep and the house was dark. I tried to turn some lights on, only to discover that we had a power outage! After some back and forth, I finally managed to get Con Edison to dispatch someone. That’s where the fun really started. Never heard back from our regular electrician, who no longer is that (I left a follow up voice mail). This little episode really brought home (so to speak) how important responsive service is for anything that’s mission critical.

The Art of Doing It Yourself Ditch the business plan and buy a lottery ticket. That's the advice I give new entrepreneurs who seek venture funding. The odds are better, and you'll get results sooner with the lottery. If you have a great idea that can change the world, then bootstrap your way until you can prove it. I founded two tech companies, co-produced a Hollywood film, and helped raise close to $100 million in private and public financing. BEYOND IDEAS. Ask any entrepreneur who has called on venture capitalists and they will likely tell you that it is almost impossible to even get calls returned. To be fair, most business plans don't deserve funding. So what should an entrepreneur do? SELF-STARTERS. There is no single recipe for bootstrapping a company, but there are some essential ingredients. Share your ideas with those who have done it before. Find a way to connect with your market. Start small. Focus on revenue and profitability from the start. Remember the importance of cash flow. Think outside the box.

What’s strategic for Google? cdixon.org – chris dixon's blog Google seems to be releasing or acquiring new products almost daily. It’s one thing for a couple of programmers to hack together a side project. It’s another thing for Google to put gobs of time and money behind it. Google makes 99% of their revenue selling text ads for things like airplane tickets, dvd players, and malpractice lawyers. Human – device – OS – browser – bandwidth – websites – ads – ad tech – relationship to advertiser – $$$ At each layer, Google either wants to dominate it or commoditize it. Device: Desktop hardware already commoditized. OS: Not commoditized, and dominated by archenemy (Microsoft)!! Browser: Not commoditized, and dominated by arch enemy! Bandwidth: Dominated by wireless carriers, cable operators and telcos. Websites/search (“ad inventory”): Search is obviously dominated by Google. Relationships to advertisers: Google is dominant in non-local direct-response ads, both SMB self serve and big company serviced accounts.

How to bring a product to market / A very rare interview with Se Nivi · December 14th, 2009 Sean Ellis recently sat down with us and explained how to bring products to market. You should listen to this interview for ideas on how to get to product/market fit, how to measure fit, and how to survey your users so you can improve fit. If you don’t know Sean from his blog or tweets, he lead marketing from launch to IPO filing at LogMeIn and Uproar. His firm, 12in6, then worked with Xobni (Khosla), Dropbox (Sequoia), Eventbrite (Sequoia), Grockit (Benchmark)… the list goes on. 12in6 “helps startups unlock their full growth potential by focusing on the core value perceived by their most passionate users.” This is the first time Sean has done an interview on the record. SlideShare: How to bring a product to market Audio: Interview with chapters (for iPod, iPhone, iTunes) Audio: Interview without chapters (MP3, works anywhere) Transcript with highlights: Below This inteview is free — thanks to KISSmetrics Prerequisites Outline Transcript Nivi: Right. Sean: Yeah.

Learn the five secrets of innovation Researchers say anyone can learn to innovate like Steve Jobs. After a six-year study, researchers say they have identified the secrets of being a great innovatorInnovation is not an inherent trait, it's a set of skills that anyone can learnExposing yourself to new ideas and observing the world around you can drive innovation London, England (CNN) -- Coming up with brilliant, game-changing ideas is what makes the likes of Apple's Steve Jobs so successful, and now researchers say they have identified the five secrets to being a great innovator Professors from Harvard Business School, Insead and Brigham Young University have just completed a six-year study of more than 3,000 executives and 500 innovative entrepreneurs, that included interviews with high-profile entrepreneurs including Amazon founder Jeff Bezos and Michael Dell, founder of Dell computers. The researchers describe this ability to connect ideas as "associating," and say it's key to innovators' ability to think outside the box.

Progress towards the mobile web and away from apps | The Equity Regular readers will know I see the iPhone/app store as a passing phase in mobile, a step on the way to a web paradigm equivalent to what we have on the PC. One of the big questions is how long this current phase lasts and with the momentum of the iPhone and the rush by all sorts of mobile players to open app stores one has to say it is still in the growth phase. That said, two pieces of news today point to the true mobile web not being too far away. Firstly Firefox has announced a new mobile browser which they claim will: be very fast support plugins sync with your PC, including bookmarks and open tabs allow developers to have apps running on multiple devices from a single code base As developers get more frustrated with quality assurance, the amount of handsets they have to buy, whether their security updates will get past the iPhone approval process… I think they’ll move to the web. and like this: In the interim period, apps will be very successful.