8 Insights About The Coming Era Of Interactive Design 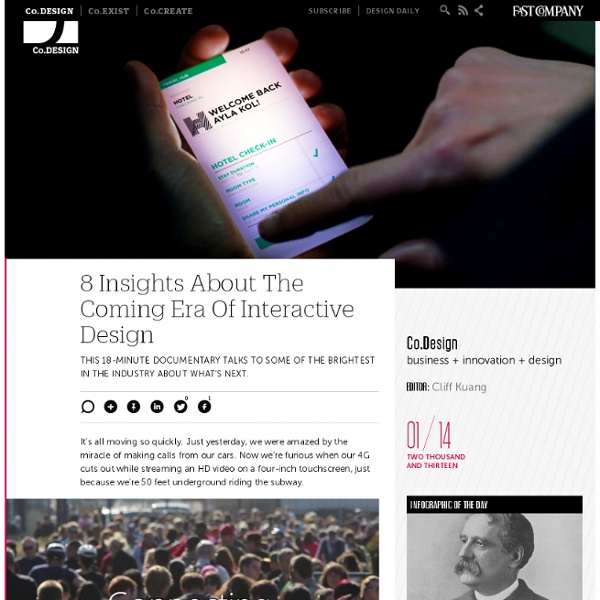 It’s all moving so quickly. Just yesterday, we were amazed by the miracle of making calls from our cars. Now we’re furious when our 4G cuts out while streaming an HD video on a four-inch touch screen, just because we’re 50 feet underground riding the subway. Connecting is a short documentary by Bassett & Partners and Microsoft that explores how our lives (and our gadgets) have and will change in a more connected world. It’s 18 minutes long but very worth the time, as it features interviews with designers from Method, Twitter, Arduino, Frog, Stamen, Microsoft, and Nokia. What’s crazy, even with the magic of editing, is that so many of these talented perspectives tend to finish one another’s sentences. As you watch, you’ll see a general consensus on a few really important points. Our phones demand too much attention, detracting from our real experiences. But that doesn’t make any of the ideas wrong. [Hat tip: The Creators Project]

How Coca-Cola Used Vending Machines To Try And Unite The People Of India And Pakistan Relations between India and Pakistan are marked by many things--and happiness is generally not one of them. But Coca-Cola recently brought both nations together--or at least brought citizens of both countries face to face--over vending machines. No ordinary vending machines, the Small World Machines, created by Coke and Leo Burnett, were equipped with full-length webcams that allowed participants to see each other and interact in real time. “We used special active-shutter 3-D technology that projected a streaming feed onto glass while filming through that glass at the same time,” explains Leo Burnett Executive Creative Director Jon Wyville. “This allowed people to make direct eye contact and touch hands.”

Trend 2013 Yes, it’s already that transitional time when our current year ends and another begins, and today and tomorrow are quickly changing hands. Rather than look back at significant trends of the past 366 days (2012 was a leap year, remember?), we asked a wide variety of technologists, designers, and strategists across Frog’s studios around the world to take a look to the future. The near future, that is. “Near” in that 2013 is not only upon us, but also “near” in that these technologies are highly feasible, commercially viable, and are bubbling up to the surface of the global zeitgeist. We believe you’ll be hearing a lot more about these trends within the next 12 months, and possibly be experiencing them in some form, too.

Anti-Social Apps Will Help Us Avoid Our Friends ⚙ Co You’ve just been through a bad breakup. After a few days of sulking, you decide it would be best to get out of the house. So you head to your favorite bar, hoping that the comfortable, familiar surroundings will help lift your spirits. Eye Tracking What if you could move a cursor on your TV with just your eyes? Or turn the page of an ebook without using your hands? These are the promises of PredictGaze, what’s basically (and somewhat allegedly) a series of ingenious algorithms by a team of garage engineers. PredictGaze can work with the lousy webcam in your smartphone, tablet, or laptop, and even in low-light conditions, track your eyes and identify your face to enable all sorts of futuristic controls. One demo shows the iPad scrolling through eye movements alone.

Here's A Reminder Of Just How Bad An Idea Texting And Driving Is, In Game Form Many anti-texting-and-driving messages are delivered via the stories of those who have suffered the consequences of the ill-advised act. We saw a particularly effective and shattering example of this form in Werner Herzog's recent doc for AT&T, From One Second To The Next. Game designer Holden Link now puts you in the driver's seat to provide a hands-on demonstration of what happens from second to second when you're texting and driving. Link's game, SMS Racing, was created as part of Ludum Dare, a 72-hour "game jam," in which thousands of programmers develop games around a given theme. "The theme this time was '10 seconds,' and while I was brainstorming idea, I kept getting interrupted by text messages, and made very slow progress because I was dividing my attention, so I decided I wanted to do something about text messaging," Link says. It's certainly helped the game connect with players.

Tech Demos Technology In session 1 of TED2013, we are meeting many new robots. First, we watched the amazing clip above of a troupe of tiny humanoid Nao robots dancing intricate choreography in unison. (They were presented by Bruno Maisonnier of Aldebaran Robotics at TEDxConcorde and beamed straight to the TED stage.) Next, Rodney Brooks unveiled Baxter, the human–like […] Hyped "Google Glass Competitor" Telepathy Barely Exists At a press event in April, Telepathy CEO Takahito Iguchi enthusiastically explained that his computer-augmented eyewear, Telepathy One, could provide anybody with, surprise, “telepathy.” Iguchi played a video that showed fashionable young people wearing the thin piece of metal, which stretches a tiny projection screen across one eye and into the corner of its wearer’s vision. He joked about people needing to “die” to get the product out before Google Glass. But he couldn’t provide answers to any questions about what its interface would look like or how a user would control it. Most of the models in Telepathy’s marketing materials have hair covering their ears, which makes it look as though the device fits like a pair of sunglasses.

Kill the Password You have a secret that can ruin your life. It’s not a well-kept secret, either. Just a simple string of characters—maybe six of them if you’re careless, 16 if you’re cautious—that can reveal everything about you.