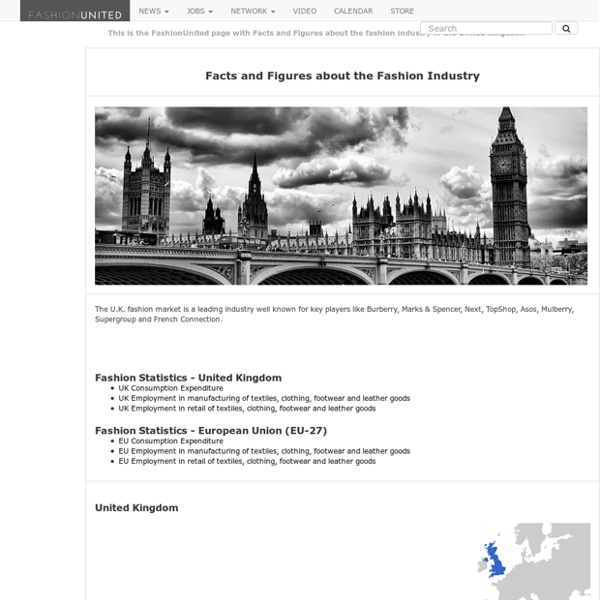 Archive: Fashion industry statistics United Kingdom 14 February 2014 At a press conference to open London Fashion Week Natalie Massenet, Chairman of the British Fashion Council, announced updated figures showing substantial growth in the UK fashion industry over the past five years. - The direct value of the UK fashion industry to the UK economy is £26 billion; up from £21 billion in 2009. The Mayor of London Boris Johnson said: ‘These latest figures are clear evidence of the hugely important contribution that fashion makes to our economy. George Osborne, Chancellor of the Exchequer said: 'London is about to host one of the central events in the fashion calendar, but more importantly it is about to showcase the world class talent we have in our fashion industry. Sam Moore, COO, Oxford Economics, added “Our research underlines the continued and growing importance of the fashion industry’s contribution to the UK economy. In 2009 there were 293,510 retail outlets in the UK.

Support for the creative economy (28th November 2012) Written Evidence submitted by the British Fashion Council [SCE 084] This submission is made on behalf of the British Fashion Council (BFC) by Caroline Rush (Chief Executive) and Simon Ward (Chief Operating Officer). The BFC welcomes the opportunity to respond to the Culture, Media and Sport Select Committee’s call for submissions relating to the support for the creative industries. Executive Summary · The UK fashion industry is advancing its economic position but requires continued government support in a number of key areas to fulfil the Chancellor’s ambition for the creative sector to become a "world leader". · The fashion industry is rightly perceived as dynamic, young and vibrant and hopeful. · Government needs to work with industry to find practical and vocational solutions to its approaching skills shortage to sustain its economic growth for the creative economy. 1.2 The role of the BFC is to nurture, support and promote British fashion talent at a designer level to a global market.

Will the Online Fashion Resale Market Take a Flash Sales Nosedive? NEW YORK, United States — There’s been a digital explosion in the market for pre-owned fashion. In the past year, we’ve seen a veritable land grab in the online consignment and resale space with the number of “re-commerce” sites now exceeding 50 — and many more, no doubt, incubating in Silicon Valley, New York, London and beyond. Several market levels are being addressed: mall/high street (Threadflip, Tradesy), thrift (LikeTwice, NiftyThrifty), upmarket (TheRealReal), haute vintage (Byronesque) and boutique (ReFashioner, my own company). It may seem like these sites are dealing in a mere by-product of the fashion industry. Picture the slide in all those investor decks from 2011 to 2012, during which an estimated $172 million in venture money was poured into second-hand fashion extraction vehicles. But therein lies the rub. But there’s more. Remember, it wasn’t so long ago that shopping second-hand was contrarian. Back to that tidal wave. So how can such a massive task be achieved?

How Mango used Localisation and Internationalisation to Conquer High Street Global Fashion - Mango, the once small Barcelona fashion store, has gone global. In this article, Spanish translator and localisation expert, Tania Gonzalez Veiga, looks at how Mango used localisation and internationalisation to expand globally and become a high street name... Huge companies don’t just “play” with tangible goods, but want to be a living part of a culture. Mango is the second largest exporter of the Spanish textile-producing sector and has more than 2,415 shops on five continents, with 150 new shops opening each year. Having been hit by the economic and financial crisis, the market, and especially companies in the Spanish textile-producing sector, Mango was able to recover thanks to globalisation. Numbers from 2010 prove it: 81% of Mango’s turnover came from the international market, with 19% coming from Spain. - But how did the corporate group adjust its products to different markets? But first, let’s take a look at the beginning of the company: Method: from testing to introducing

Retail Forecast for 2018 - Centre for Retail Research, Nottingham UK Retail in 2018 - Shop numbers, Online and the High Street The Centre for Retail Research published its analysis of how UK retailing will have changed by 2018 on 28 May 2013, entitled Retail Futures 2018 forecasts that by 2018: Total store numbers will fall by 22%, from 281,930 today to 220,000 in 2018. Job losses could be around 316,000 compared to today The share of online retail sales will rise from 12.7% (2012) to 21.5% by 2018 or the end of the decade. There will be a further 164 major or medium-sized companies going into administration, involving the loss of 22,600 stores and 140,000 employees. UK retailing has the highest proportion of online retail sales, so what happens here is being closed watched by foreign observers as Britain becomes a test bed for retail innovation. Key catalysts for the looming retail crisis: Consumer spending has increase by 12% since 2006 outstripped by retail operating costs (including rates) which have risen by 20%. UK is facing a crisis. Store Closures

Content and Social Media Ideas for the Vintage Fashion Industry | Online PR UK I have a friend who runs a vintage fashion label. My Vintage Affair. She also runs fairs across London. There are of course (and here comes the plug) more ideas in my book “One Giant Leap Into Social Media Marketing” which is available online. So, Whether you are an online retailer a real life retailer or a brand that needs a kick up the backside, also, assuming your logo, page design and database are up to scratch; here are a few pointers to get your online presence rocking: 1. 2.Take pictures of your stock and instead of just posting them up on your blog, Facebook etc. 3. 4. 5. 6. 7. 8. 9.Write a book! Keep an eye on: My Vintage Affair Pop Up Vintage Fairs Butterfly Girl Vintage Hope these give you some inspiration!

Vintage Clothing: 'When I was 14, I swore I'd never wear high street clothes again...' - Features - Fashion Since then, the vintage look has become a trend in its own right, with designers looking to the past for inspiration and streetwear taking on a more nostalgic sensibility in recent years, while shoppers have become more savvy about researching the "greatest hits" of their favourite labels. But it can be daunting, flicking through those crowded rails, at a loss as to whether that dress in your hand is someone's old tat or a long-lost gem. The answer is, it could be either. Vintage shopping is as individual an activity as those who practise it – so take your lead from three very different experts, each with their own take on trawling. William Banks-Blaney William Banks-Blaney is a globe-trotting vintage shopper, who seeks out priceless couture pieces for private clients and the boutique Browns. What's the story behind your favourite vintage find? In the US, as I was leaving a thrift store, the proprietor said: "Oh! Where do you source your pieces? What do you look for? What are your tips?

MANGO FAST FASHION | Farzan Engar Page 4 Introduction Today people prefer to purchase from online stores. It is not just becauseit is much easier but also because it could save some time and money for them. Some facts about fashion and marketing :Fashion is the imitation of a given example and satisfies the demand for social adaptation. . . . Georg Simmel, ―Fashion‖ (1904 Markets and Customers: In 2000, retail spending on clothing or apparel reached approximately billion worldwide .According to one set of estimates, (Western) Europeaccounted for 34% of the total market, the United States for 29%, and Asiafor 23%.1*Fashion market has more income from retail markets and it is very pleasedwith loyal customers.

British Fashion Council The purpose of the British Fashion Council’s digital pillar is to support the British fashion industry to become the world leader in creativity, business and innovation. It is important for the British designer community to drive forward sales and increase their profile on the global stage and innovating digitally is a perfect way to achieve this. The Mayor of London Boris Johnson said: 'I am delighted to support British fashion, which continues to be at the forefront of innovation. From how our designers are working and presenting their collections, to the fast paced dynamism of the retail sector, fashion is utilising the latest technologies to ensure this important industry continues to generate billions for our economy. London is developing a reputation as one of the tech capitals of the world, but it is already a global leader for fashion.' Today, market research firm Mintel has released the following statistics: Digital at London Fashion Week The British Fashion Industry

Combatting fast fashion can be difficult - lsureveille.com: Entertainment The biggest goal in fashion today is staying current. It’s why people will stand in line for hours on Black Friday to get the perfect wardrobe for cheap prices, why college students will buy an outfit for a single event or festival and never wear it again, or why a graphic T-shirt is only relevant the first day it’s worn. But fashionistas and fashionistos may be approaching the way they buy clothes in all the wrong ways. “Fast fashion” is a term referring to the general tactic most big-name retailers take where they push out material day after day for cheap prices, and they do it by the boatload. Shannon Whitehead, sustainable fashion writer and founder of Factory45, an accelerator program that gives designers and makers the resources to start sustainable businesses in the U.S., said almost all majors retail stores use this method in one way or another. Factory45 is a six-month-long online program divided into three two-month modules to help designers start their own careers in fashion.

River Island Marketing Group Accompanied Shop and Wardrobe AuditBiog of target customer:§ Age:§ Occupation:§ ACORN category:§ Diffusion of Innovation classification:§ Where they usually shop:§ How often they go shopping:§ How much they spend a month on clothing:§ Their reasons for shopping at River Island:§ How often they shop in River Island: Accompanied Shop:Target customer will be taken to River Island,...., and will lead the market researcher around the stores, and be asked to look at denim in particular.Notes and photographs will be taken to record the following: § Direction in which shopper moved around the store§ Dwell time at different products and displays, including denim§ Products browsed including order in which browsed§ Products purchased§ Preferences expressed§ Price sensitivity? Wardrobe Audit:Take photos and record comments on the following:§ Pick out 6 of your favourite items in your wardrobe (from any retailer):- Where did you buy them from?

London on course for another year of record-breaking visitor numbers in 2014 London welcomed over 3.6 million overseas visits in the first three months of 2014, resulting in the best ever first quarter tourism numbers in the city’s history. The figures published today from the latest International Passenger Survey (IPS) show an 8.6 per cent increase on the same period last year, confirming that London is on track to welcome more visitors in 2014 than the 16.8 million that came to the city in 2013 – already a record-breaking year for the capital. Tourist spending over the same period was £2.44 billion, a 14.6 per cent increase compared with the first quarter of last year. The total spend in London’s tourism sector has gone up every quarter for the last two and a half years. These promising figures come just one day after London was crowned the most popular tourist destination in the world by the respected MasterCard Global Cities Index report, putting the city ahead of Bangkok and Paris. Notes to Editors