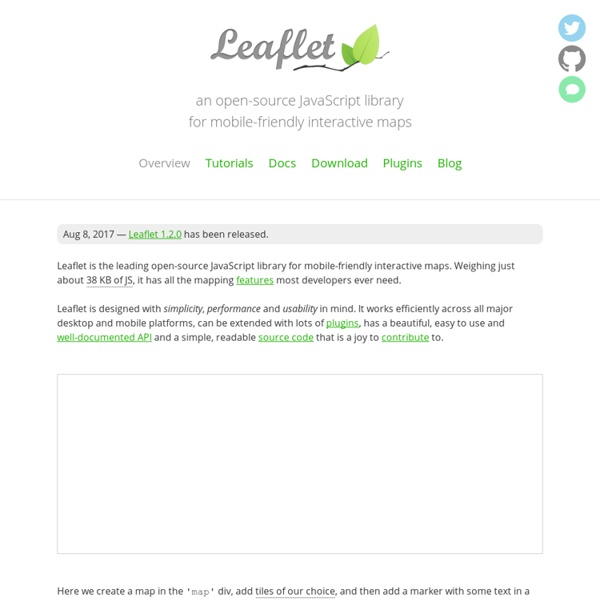 An Open-Source JavaScript Library for Mobile-Friendly Interactive Maps November 18, 2013 — Leaflet 0.7 Release, MapBox & Plans for Future (Blog Post) Leaflet is a modern open-source JavaScript library for mobile-friendly interactive maps. It is developed by Vladimir Agafonkin with a team of dedicated contributors. Weighing just about 33 KB of JS, it has all the features most developers ever need for online maps. Leaflet is designed with simplicity, performance and usability in mind.

The internet is our social network. What if social networks were more like email? What if they were all inter-connected, and you could choose which software (and even which provider) to use based purely on what they offered you? Now they are! Friendica is bringing them all together. All of these can be included in your Friendica "social stream" where you may interact with them using a familiar conversational interface - and perhaps arrange them into private conversation groups. This lets you easily separate what posts can be seen by your co-workers and your beer-drinking buddies.

LookAt - Video Collaboration Share your projects with everyone involved. Easily sketch changes and add, share and respond to comments frame-by-frame. Never confuse versions again! The latest version of your video and all previous revisions are clearly organized and easily accessible in the LookAt environment. Font sizing with rem Determining a unit of measurement to size our text can be a topic of heated debate, even in this day and age. Unfortunately, there are still various pros and cons that make the various techniques less desirable. It's just a matter of which less-desirable is most desirable. There are two main techniques that are extolled: Size with pxSize with em

holmes.css - CSS Markup Detective What does it do? The holmes.css file will display either an error (red outline), a warning (yellow outline), or a deprecated style (dark grey outline) for flags such as: Missing required attributes on tags, such as name attributes on inputs (lots of these) Potentially improvable markup, such as links with href="#" Deprecated and Non-W3C Elements - see W3C.org's article on obselete tags Non-W3C Attributes - as above, just the most important ones since there are MANY Thanks to Anthony Mann, holmes now displays an informative error message when you hover over the element. Support for :after/::after on images is non-existent however in most browsers.

CSS Selectors and Pseudo Selectors and browser support This page has not been updated for some time and some of the browser versions are obsolete - I'm working on a better format for the page, so check back every now and then :) The following is a range of CSS tests of the most common browsers' support for selectors and pseudo selectors. The tests includes basic stuff from the good old days of CSS1 and funky stuff from the future (CSS3). Heroku Breaks Through with Facebook Cloud Integration Following hot on the heels of its recent announcement that it would add support for Java to the support already given to apps written in Ruby, Node.js and Clojure, Platform-as-a-service provider Heroku this morning announced a breakthrough partnership with Facebook that effectively allows anyone with a Heroku account to become an adept, cloud-based Facebook app developer. To give SitePoint readers a head start, we’ve obtained permission to publish the following tutorial, drawing on functionality in Facebook that is only available from today. Let me hand you over to Adam Wiggins of Heroku. Getting Started with Your Facebook App on Heroku This guide is for Facebook developers who are creating apps on Heroku via the Facebook Cloud Services integration.

Workshop / Chrome Experiments Unfortunately, either your web browser or your graphics card doesn't support WebGL. We recommend you try it again with Google Chrome. .htaccess Files for the Rest of Us .htaccess files are used to configure Apache, as well a range of other web servers. Despite the .htaccess file type extension, they are simply text files that can be edited using any text-editor. In this article, we'll review what they are, and how you can use them in your projects.

StackSlider: A Fun 3D Image Slider An experimental image slider that flips through images in 3D. Two stacks resemble image piles where images will be lifted off from and rotated to the center for viewing. View demo Download source HTML_CodeSniffer – Check Any HTML With The Given Web Standard HTML_CodeSniffer is a bookmarklet to check if a web page validates for the selected standard. The bookmarklet is open source, has a slick interface and currently comes with a set of 3 standards that enforce the Web Content Accessibility Guidelines (WCAG) 2.0. It displays the errors, warnings + notices and their details can still be viewed within the bookmarklet. The standards and their rules are hosted in the GitHub repository, so, once a new standard or rule is added by the developer, the bookmarklet will auto-update.

Web Advent 2012 / Dealing with Email Image Blocking You probably get a lot of email and even more newsletters. My HTML email newsletters are all mixed in with my plain-text emails, and when I’m going through my inbox, it’s a quick and efficient process. I want to be able to get the point of each email quickly. When I open an HTML email and see rows of blank outlined boxes, I immediately think, “this isn’t relevant or necessary to me; moving on.” I very rarely decide to turn the images on. One alarming statistic found that 30% of recipients are unaware that images are even disabled in the first place!