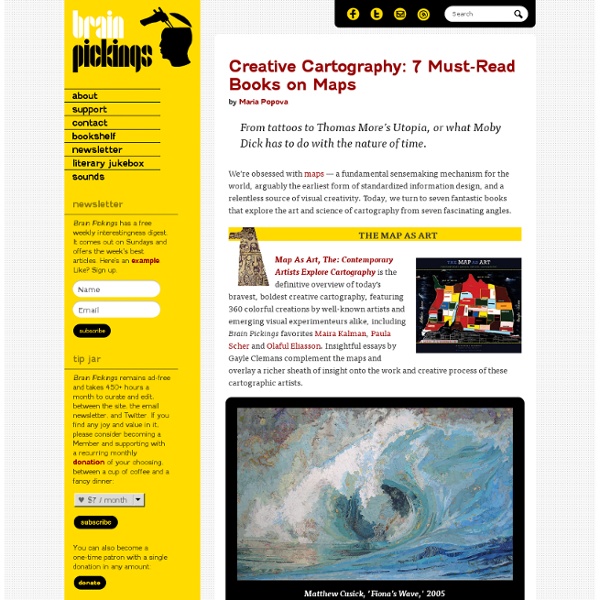 by Maria Popova From tattoos to Thomas More’s Utopia, or what Moby Dick has to do with the nature of time. We’re obsessed with maps — a fundamental sensemaking mechanism for the world, arguably the earliest form of standardized information design, and a relentless source of visual creativity. Today, we turn to seven fantastic books that explore the art and science of cartography from seven fascinating angles. Map As Art, The: Contemporary Artists Explore Cartography is the definitive overview of today’s bravest, boldest creative cartography, featuring 360 colorful creations by well-known artists and emerging visual experimenteurs alike, including Brain Pickings favorites Maira Kalman, Paula Scher and Olaful Eliasson. Insightful essays by Gayle Clemans complement the maps and overlay a richer sheath of insight onto the work and creative process of these cartographic artists. Matthew Cusick, 'Fiona’s Wave,' 2005 Qin Ga, 'Site 22: Mao Zedong Temple,' 2005 We reviewed it in full here.

Mapping the Human Condition by Maria Popova What the empire of love has to do with the intellect forest and the bay of agoraphobia. We love maps. In 1961, Norton Juster wrote The Phantom Tollbooth, a timeless children’s classic and one of our essential children’s books with philosophy for grown-ups. This map by mid-century American cartoonist Jules Feiffer, who illustrated the book, depicts the marvelous land that Milo finds himself in as he follows his own curiosity. Thanks, @dethe Last week, delicious new work by designer Marian Bantjes (whose latest book, I Wonder, is among the most ambitious and beautiful visual communication volumes ever published) made the rounds — and for good reason: Isle of Knowledge is a beautifully illustrated map of “the ‘known’ beyond which lie monsters,” created for the second installment in Bantjes’ column for UK illustration magazine Varoom on the theme of “Knowledge.” Map of an Englishman Image courtesy of Grayson Perry and The Paragon Press via BBC Donating = Loving Share on Tumblr

John Steinbeck on Falling in Love: A 1958 Letter by Maria Popova “If it is right, it happens — The main thing is not to hurry. Nothing good gets away.” Nobel laureate John Steinbeck (1902-1968) might be best-known as the author of East of Eden, The Grapes of Wrath, and Of Mice and Men, but he was also a prolific letter-writer. Among his correspondence is this beautiful response to his eldest son Thom’s 1958 letter, in which the teenage boy confesses to have fallen desperately in love with a girl named Susan while at boarding school. New York November 10, 1958Dear Thom:We had your letter this morning. Complement with six tips on writing from Steinbeck. via Letters of Note Donating = Loving Bringing you (ad-free) Brain Pickings takes hundreds of hours each month. You can also become a one-time patron with a single donation in any amount: Brain Pickings has a free weekly newsletter. Share on Tumblr

Charles Bukowski, Arthur C. Clarke, Annie Dillard, John Cage, and Others on the Meaning of Life by Maria Popova “We are here to laugh at the odds and live our lives so well that Death will tremble to take us.” The quest to understand the meaning of life has haunted humanity since the dawn of existence. Modern history alone has given us a plethora of attempted answers, including ones from Steve Jobs, Stanley Kubrick, David Foster Wallace, Anais Nin, Ray Bradbury, and Jackson Pollock’s dad. In 1988, the editors of LIFE magazine posed this grand question head-on to 300 “wise men and women,” from celebrated authors, actors, and artists to global spiritual leaders to everyday farmers, barbers, and welfare mothers. Pulitzer Prize winner Annie Dillard: We are here to witness the creation and abet it. Ralph Morse Albert Einstein's study shortly after his death, Princeton, New Jersey Legendary science writer Stephen Jay Gould: The human species has inhabited this planet for only 250,000 years or so-roughly.0015 percent of the history of life, the last inch of the cosmic mile. Bill Owens Sicily

7 Must-Read Books on the Art & Science of Happiness by Maria Popova From Plato to Buddha, or what imperfection has to do with the neuroscience of the good life. If you, like me, are fascinated by the human quest to understand the underpinnings of happiness but break out in hives at the mere mention of self-help books, you’re in luck: I’ve sifted through my personal library, a decade’s worth of obsessive reading, to surface seven essential books on the art and science of happiness, rooted in solid science, contemporary philosophy and cross-disciplinary insight. The question of what makes us happy is likely as old as human cognition itself and has occupied the minds of philosophers, prophets and scientists for millennia. Human rationality depends critically on sophisticated emotionality. Haidt takes this ambitious analysis of philosophical thought over the centuries and examines it through the prism of modern psychology research to extract a remarkably compelling blueprint for optimizing the human condition for happiness. Donating = Loving

Brain Pickings | Psychology 24 APRIL, 2014By: Maria Popova Warm wisdom from the beloved author to console on one of life’s deepest sources of isolation. “Dear Judy, please send me the facts of life, in numbered order.” So requested 9-year-old Fern in one of the many gems collected in Letters to Judy (public library) — an infinitely endearing compendium of the missives beloved author Judy Blume received from children, whose classic capacity for asking questions at once simple and profound shines here with soul-expanding luminosity. Because her young-adult novels have tackled such timelessly tricky subjects as teenage sex (Forever…), sibling rivalry (The Pain and the Great One), divorce (It’s Not the End of the World), masturbation (Deenie), menstruation (Are You There God? Sometimes funny, sometimes poignant, always earnest, these letters cover everything from the innocent joys of first love to the despairing anguish of loneliness and loss to the general psychoemotional turbulence of puberty. Donating = Loving

Why We Love: 5 Must-Read Books on the Psychology of Love It’s often said that every song, every poem, every novel, every painting ever created is in some way “about” love. What this really means is that love is a central theme, an underlying preoccupation, in humanity’s greatest works. But what exactly is love? How does its mechanism spur such poeticism, and how does it lodge itself in our minds, hearts and souls so completely, so stubbornly, as to permeate every aspect of the human imagination? No superlative is an exaggeration of Alain de Botton‘s humble brilliance spanning everything from philosophy to architecture. Every fall into love involves [to adapt Oscar Wilde] the triumph of hope over self-knowledge. You might recall biological anthropologist Helen Fisher‘s work from this fascinating discussion of how antidepressants impact the experience of romantic love. Sample her work with this fantastic TED talk on the brain in love: For many people, love is the most important thing in their lives. Is love really blind?

Do the Work: Steven Pressfield: Amazon.com Flashmob or Polished Ad on a Spanish Plaza, This Video Is a Feast Let's make no mistake here; this is a commercial for Banco Sabadell. And, yes, it's a majestic, highly orchestrated flashmob organized by one of Spain's largest banking groups. But, when I get an evening email from our founder and host confessing to shedding "happy tears" when watching it, I figure I better check it out. And, if you read the comments on YouTube, you'll see much more of the same sentiment being expressed. On May 19th at six in the evening, what appeared to be a single, tuxedoed street performer playing a bass for people strolling around Plaça de Sant Roc in Sabadell, Spain (just north of Barcelona) turned into a mass ensemble performing a movement of Beethoven's Ninth Symphony — including more than 100 musicians and singers from the Orchestra Simfònica del Vallès, Amics de l’Òpera de Sabadell, Coral Belles Arts, and Cor Lieder Camera. The production is lovely and highly produced, but it's the fascination and pure joy of the passersby that makes the moment quite magical.

Ode to Joy lyrics Ceate your own life itinerary and map. Beyond Frankl: Towards a Meaningful Life Viktor Frankl spoke of the three layers of being: pyshical, psyche, and noetic. But how does one create meaning from being? Credit: Creative Commons/ Neozoon. When Viktor Frankl was freed from a Nazi concentration camp, he already had a developed theory of what makes us tick. Frankl stressed three layers of the human being –physical, psyche, and noetic. While Frankl left us with a theory about meaning, it is hard to piece together any practice to help establish a sense of meaning in life. Begin with Being Our pervasive cultural value of ceaseless productivity is making it difficult to maintain a sense of personal meaning. In order to buffer our meaning through doing we must refocus to the ground on which life takes place. When we place being at the center of our life, we find ourselves engaged in an ongoing process of affirming our very existence. Creation and Discovery of Meaning Experiences like baking with Grandma can revive your sense of aliveness and personal meaning. Conclusion

What Would A.J. Heschel Be Doing or Advocating Today? At the Philadelphia “Heschel/King Festival” last week, on the occasion of the 40th anniversary of Abraham Joshua Heschel’s death (his Yarhzeit), I was asked to speak about what this man, now recognized as the most significant American Jewish theologian of the 20th century (and my mentor at the Jewish Theological Seminary) would have been advocating or what would he want from us were he alive today. Here’s much of what I said: What Does Heschel Want from Us Today? Abraham Joshua Heschel, z”l (Zeecrhono Lee’vracha — “may his memory be a blessing”), taught that Judaism is spiritual effrontery….The most urgent task is to destroy the myth that accumulation of wealth and the achievement of comfort are the chief vocation of humanity. How can adjustment to society be an inspiration to our youth if that society persists in squandering the material resources of the world on luxuries in a world where more than a billion people go hungry every night? Prayer can be helpful. 1. 2. 2. 3. 4. 4.

Sense And Nonsense About Climate Change. What Do Investors Need To Know? Climate change skepticism owes more to psychology than hard science. Whether real or imagined, climate change has important implications for investors. In recent discussion threads on Seeking Alpha, more than 60 participants have argued heatedly about climate change, posting nearly a thousand comments. What is striking about this (admittedly unscientific) poll of SA readers, is that skeptics have outnumbered believers by around 2 to 1 -- more or less the inverse of the proportions in the American public at large (Figure 1). Figure 1 - Is climate change occurring? (click to enlarge) Want more from this author? Follow and be the first to know when they publish. Follow Robert Keyfitz (101 followers) (You’ll be notified by email with new articles from your favorite authors.) New! Follow these related stocks (Click to add stocks to your portfolio) Share this article with a colleague