Faumaxion Slippy Map. Robert W. Gray's Buckminster Fuller Notes. Because of the amount of information I have accumulated on Fuller's world maps, particularly the icosahedron based map, I have divide the information into many different parts. 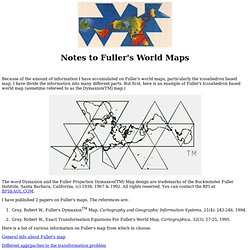 But first, here is an example of Fuller's Icosahedron based world map (sometime refereed to as the Dymaxion(TM) map.) The word Dymaxion and the Fuller Projection Dymaxion(TM) Map design are trademarks of the Buckminster Fuller Institute, Santa Barbara, California, (c) 1938, 1967 & 1992. All rights reserved. You can contact the BFI at BFI@AOL.COM. I have published 2 papers on Fuller's maps. Gray, Robert W., Fuller's DymaxionTM Map, Cartography and Geographic Information Systems, 21(4): 243-246, 1994. Here is a list of various information on Fuller's map from which to choose.

General info about Fuller's map Different apprpaches to the transformation problem Area distortion of the map Coordinates for icoashedron the orientation C language source code for Longitude-Latitude to xy-coordinate transformation. Fuller Projection. Dymaxion Projection Animation. Dymaxion Projection Animation After lying untouched for years -- I haven't even looked at this in at least three -- there was such an interest surge in this animation that I revisited it for a new improved rendering. 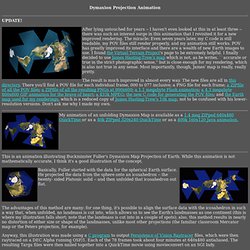 The miracle: Even seven years later, my C code is still readable, my POV files still render properly, and my animation still works. POV has greatly improved its interface and there are a wealth of new Earth images to use. I found the Virtual Terrain Project's page to be extremely helpful. I finally decided to use James Hasting-Trew's map which is not, as he writes, ``accurate or true in the strict photographic sense,'' but is close enough for my rendering, which is also not true in any sense. The result is much improved in almost every way. My animation of an unfolding Dymaxion Map is available as a 1.4 meg ZIPped 640x480 QuickTime or as a 40k ZIPped 320x240 QuickTime or as a 400k 160x120 Java animation. Both animations are hereby released to the public domain. Dymaxion map. The Dymaxion map or Fuller map is a projection of a world map onto the surface of an icosahedron, which can be unfolded and flattened to two dimensions. 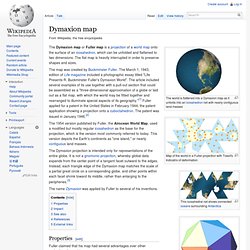 The flat map is heavily interrupted in order to preserve shapes and sizes. The 1954 version published by Fuller, the Airocean World Map, used a modified but mostly regular icosahedron as the base for the projection, which is the version most commonly referred to today. This version depicts the Earth's continents as "one island," or nearly contiguous land masses. The Dymaxion projection is intended only for representations of the entire globe. It is not a gnomonic projection, whereby global data expands from the center point of a tangent facet outward to the edges. The name Dymaxion was applied by Fuller to several of his inventions. Properties[edit] Fuller claimed that his map had several advantages over other projections for world maps.

More unusually, the Dymaxion map does not have any "right way up". Impact[edit] See also[edit]