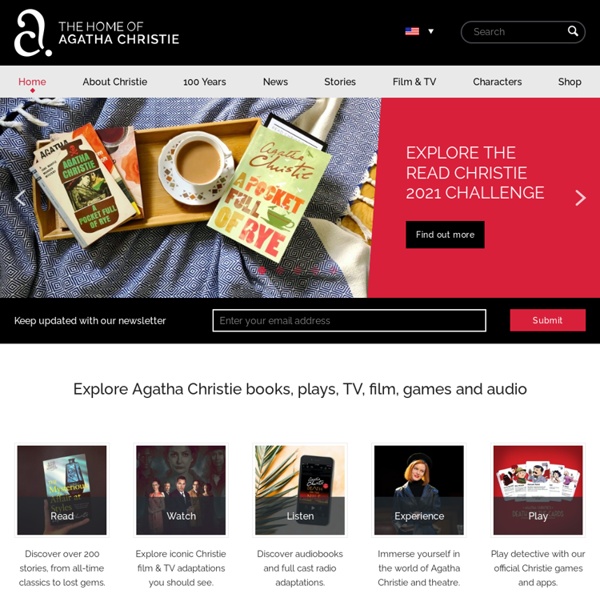 Agatha Christie Dame Agatha Mary Clarissa Christie, DBE (née Miller; 15 September 1890 – 12 January 1976) was an English crime novelist, short story writer, and playwright. She also wrote six romances under the name Mary Westmacott, but she is best known for the 66 detective novels and 14 short story collections she wrote under her own name, most of which revolve around the investigations of such characters as Hercule Poirot, Jane Marple, Parker Pyne, Harley Quin/Mr Satterthwaite, and Tommy and Tuppence Beresford. She wrote the world's longest-running play, The Mousetrap.[1] Born into a wealthy upper-middle-class family in Torquay, Devon, Christie served in a hospital during the First World War, before marrying and starting a family in London.

British Council Wendy: The streets of London are full of history. But not all the famous characters associated with this city were real. More than a hundred years ago when people travelled by horse and cart and the foggy streets were lit by gaslight, one famous detective was leading the fight against crime. It was Victorian London, the time of Sherlock Holmes. The fictional character of Sherlock Holmes has been popular ever since he was created by author Sir Arthur Conan Doyle in the late 1800s. Since then, Holmes has appeared in many films…

Crime and Punishment Vocabulary with Pronunciation The most common crime and punishment vocabulary with audios for pronunciation. This word list covers crimes, criminals, punishment, court proceedings and other useful words to write and talk about the topic of crime. Practice the words with the vocabulary exercise at the bottom of the page. These crimes are divided into crimes which are considered serious and those that are not. Major Crimes Crime and Punishment: IELTS Reading Exercise This IELTS reading exercise is based on the question type of matching sentence endings and covers the topic of crime and punishment. This article is adapted from a UK newspaper discussing the aims of prisons and contains very useful vocabulary for a common IELTS topic. The Old Debate: Punish or Rehabilitate Debates over how to treat prisoners have gone on since imprisonment began: should the prison system leave inmates to fester in cold cells, with punishment and deterrence as the goal of incarceration? Or should it let them wander from classroom to games room, preaching rehabilitation into society as its main aim? With over 83,000 prisoners currently locked away, England and Wales have a staggering imprisonment rate of 150 per 100,000 of the population.

The first whodunnit: How the murder of a three-year-old boy gave us the fictional detectives we know today By Geoffrey Wansell Updated: 02:00 BST, 17 July 2008 The sun's rays were just appearing over the horizon in the early hours of a Victorian summer's morning. In an elegant Georgian house in the hamlet of Road in Wiltshire, all was quiet. The prosperous Kent family - nine family members, and three servants - were all asleep in their beds. Or so it seemed. An hour after midnight the family's Newfoundland dog - notorious for reacting to the slightest provocation - had barked loudly, but no one paid the slightest attention.