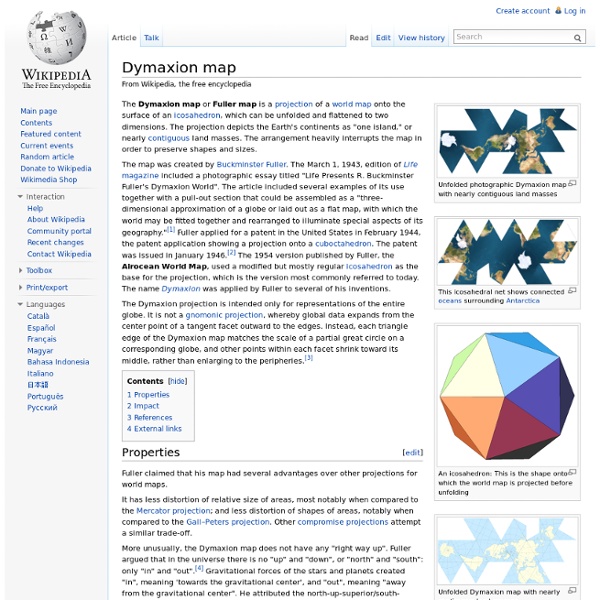 The Dymaxion map or Fuller map is a projection of a world map onto the surface of an icosahedron, which can be unfolded and flattened to two dimensions. The flat map is heavily interrupted in order to preserve shapes and sizes. The 1954 version published by Fuller, the Airocean World Map, used a modified but mostly regular icosahedron as the base for the projection, which is the version most commonly referred to today. The Dymaxion projection is intended only for representations of the entire globe. The name Dymaxion was applied by Fuller to several of his inventions. Properties[edit] Fuller claimed that his map had several advantages over other projections for world maps. It has less distortion of relative size of areas, most notably when compared to the Mercator projection; and less distortion of shapes of areas, notably when compared to the Gall–Peters projection. More unusually, the Dymaxion map does not have any "right way up". Impact[edit] See also[edit] List of map projections

Critical Path (book) Critical Path is a book written by US author and inventor R. Buckminster Fuller with the assistance of Kiyoshi Kuromiya. First published in 1981, it is alongside Operating Manual for Spaceship Earth one of Fuller's best-known works. Vast in its scope, it describes Fuller's own vision of the development of human civilization, economic history, and his highly original economic ideology based, amongst other things, on his detailed description of why scarcity of resources need no longer be a decisive factor in global politics. The following is a list of the main claims and opinions presented in the book, reported without discussion or criticism. The first part of the book explains the history and present state of the global economy. Human life began in the atolls of the South Pacific, where the average sea temperature is closest to that of the human body (p. 6). Our knowledge of the spherical shape of the Earth is central to our understanding of ecology (p. 34). Critical path. Mr.