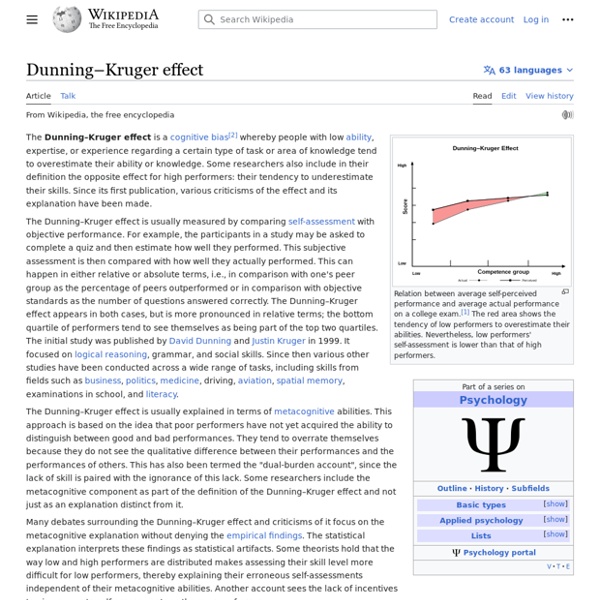 Cognitive bias about one's own skill The Dunning–Kruger effect is a hypothetical cognitive bias stating that people with low ability at a task overestimate their own ability, and that people with high ability at a task underestimate their own ability. As described by social psychologists David Dunning and Justin Kruger, the bias results from an internal illusion in people of low ability and from an external misperception in people of high ability; that is, "the miscalibration of the incompetent stems from an error about the self, whereas the miscalibration of the highly competent stems from an error about others".[1] It is related to the cognitive bias of illusory superiority and comes from people's inability to recognize their lack of ability. Without the self-awareness of metacognition, people cannot objectively evaluate their level of competence. Original study[edit] Later studies[edit] Mathematical critique[edit] Paired measures[edit] Cultural differences in self-perception[edit]

Confirmation Bias: How Intelligent People Develop Totally Incorrect Beliefs Study debunks long-held myth probably arising from the confirmation bias. The full moon is NOT linked to busier hospital emergency rooms or more births, a new study finds. The belief that there might be a link is likely down to a bias in the way even intelligent people think called the confirmation bias. Jean-Luc Margot, a UCLA professor of planetary astronomy, who carried out the study, said:

Florida and Georgia facing scrutiny for their Covid-19 data reporting In Florida, Rebekah Jones, the official behind the state's "dashboard," a web page showing the number of Covid-19 cases and deaths, said she was removed from the project and questioned the state's commitment to accessibility and transparency, according to Florida Today. And in Georgia, data tracking Covid-19 cases has come under question after a misleading chart was posted on the Department of Public Health's website with the dates out of order, suggesting cases were declining over time, according to an article by the Atlanta Journal-Constitution. Questions around data are not limited to these two states.

Danger triangle of the face The danger triangle of the face consists of the area from the corners of the mouth to the bridge of the nose, including the nose and maxilla.[1][2] (pp345–346)Due to the special nature of the blood supply to the human nose and surrounding area, it is possible for retrograde infections from the nasal area to spread to the brain causing cavernous sinus thrombosis, meningitis or brain abscess. This is possible because of venous communication (via the ophthalmic veins) between the facial vein and the cavernous sinus. The cavernous sinus lies within the cranial cavity, between layers of the meninges and is a major conduit of venous drainage from the brain.[3] It is a common misconception that the veins of the head do not contain one-way valves like other veins of the circulatory system.

Me, Myself and My Stranger: Understanding the Neuroscience of Selfhood Where are you right now? Maybe you are at home, the office or a coffee shop—but such responses provide only a partial answer to the question at hand. Asked another way, what is the location of your "self" as you read this sentence? Like most people, you probably have a strong sense that your conscious self is housed within your physical body, regardless of your surroundings. But sometimes this spatial self-location goes awry. During a so-called out-of-body experience, for example, one's self seems to be transported outside the physical body into a surreal perspective—some people even believe they are viewing their bodies from above, as though their true selves were floating.

The Cognitive Bias President Trump Understands Better Than You Americans born in the United States are more murderous than undocumented immigrants. Fighting words, I know. But why? The government says there’s no inflation — except for the things people are actually buying The things that we are still spending money on — food, rent, booze and video streaming — are going up in price as the coronavirus pandemic wears on. The things that we aren’t buying as much of — gasoline, clothing, transportation and hotel rooms — are going down in price. And the government says there’s no inflation.

Sympathetic ophthalmia Sympathetic ophthalmia (SO) is a bilateral diffuse granulomatous uveitis (a kind of inflammation) of both eyes following trauma to one eye. It can leave the patient completely blind. Symptoms may develop from days to several years after a penetrating eye injury. History[edit] It is thought that Louis Braille, who injured one of his eyes as a child, lost vision in his other eye owing to SO.[2] James Thurber's adult blindness was also diagnosed as sympathetic ophthalmia deriving from the loss of an eye when he was six years old.[3] Epidemiology[edit] 10 More Common Faults in Human Thought Humans This list is a follow up to Top 10 Common Faults in Human Thought. Thanks for everyone’s comments and feedback; you have inspired this second list! It is amazing that with all these biases, people are able to actually have a rational thought every now and then.

10 Practical Uses For Psychological Research in Everyday Life People love to give each other advice. The web is full to bursting with all types of pseudo-psychological advice about life. The problem is, how much of this is based on real scientific evidence? Capital - How to stop lying to yourself Newly divorced, Eleanor Bain thought she’d finally met the man of her dreams. She was in a new city, looking for a new job and starting a new life with her two daughters, when she fell in love, or so she thought. It’s like a boomerang, when you suddenly realise that this is not so peachy But along with the positives of shared interests, there were plenty of negatives. Sometimes the pair ended up screaming at each other for hours on end.

Five Cognitive Biases In Data Science (And how to avoid them) Retrain your mind. Image by John Hain from Pixabay. Recently, I was reading Rolf Dobell’s The Art of Thinking Clearly, which made me think about cognitive biases in a way I never had before. I realized how deeply seated some cognitive biases are. In fact, we often don’t even consciously realize when our thinking is being affected by one. For data scientists, these biases can really change the way we work with data and make our day-to-day decisions, and generally not for the better.