Recreated "I Love You Forever" Book For My Mom! I Grew Up in a Family of Dwarfs. We Need to Rename ADHD. Deaf women fought for the right to vote. If Susan B. 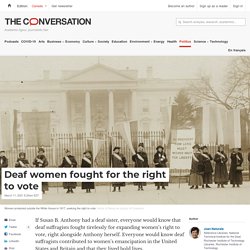 Anthony had a deaf sister, everyone would know that deaf suffragists fought tirelessly for expanding women’s right to vote, right alongside Anthony herself. Everyone would know deaf suffragists contributed to women’s emancipation in the United States and Britain and that they lived bold lives. As a researcher of deaf history, including deaf women’s history, I work to illuminate the often hidden history of deaf people and their unique contributions to the world.

I have unearthed historical information about deaf women suffragists and assembled it into an online collection chronicling what is known – so far – about these women and their lives. Despite harsh, discriminatory conditions, low pay and lack of recognition, countless deaf women have fought with brilliance and dedication for personal and professional recognition, including for the right to vote. Underpaid and discriminated against Annie Jump Cannon was a pioneering astronomer. Two British women faced prison. Stories from American Experience. In November of 1924, two women pose for a picture outside the Virginia Colony for Epileptics and Feeble-Minded. 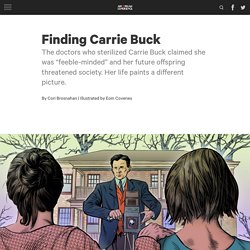 Mother and daughter, they were separated some dozen years before, when municipal authorities decided that Emma Buck couldn’t provide adequate care for her little girl, Carrie, no more than six at the time. Despite the years apart, their relationship seems affectionate. Nike Unveils Its First Hands-Free Sneaker: The GO FlyEase. Nike sells more shoes than any other company in the world, and while the shapes, styles, and sizes of its sneakers may vary, they all have one thing in common: you need to use your hands to put them on. 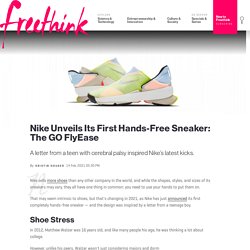 That may seem intrinsic to shoes, but that's changing in 2021, as Nike has just announced its first completely hands-free sneaker — and the design was inspired by a letter from a teenage boy. Shoe Stress. National Anthem in ASL at Super Bowl LV. Biden administration acts to ensure people with disabilities keep their Social Security benefits. The Trump administration worked hard to destroy Social Security every which way it could. 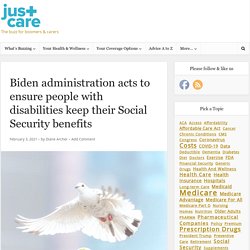 Among other things, it made it extraordinarily difficult for people to get the Social Security benefits to which they are entitled. Now, Jake Johnson reports for Common Dreams, that the Biden administration has withdrawn a Trump administration not-yet-final regulation that would likely have taken disability benefits from hundreds of thousands of Americans. The Trump administration tried to subject people receiving Social Security long-term disability benefits to constant reviews if they wanted to retain these benefits. The additional reviews would have posed challenging administrative hurdles for people receiving benefits. Parents Sue Louisiana Sheriff and Deputies Over Autistic Son’s Death.

The parents of an autistic teenager who died last year after an encounter with sheriff’s deputies in Jefferson Parish, La., filed a federal lawsuit on Thursday, claiming that deputies who were trying to restrain him had sat on him for a total of more than nine minutes, leading to his death. 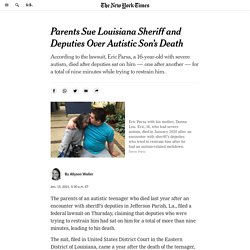 The suit, filed in United States District Court in the Eastern District of Louisiana, came a year after the death of the teenager, Eric Parsa, who had severe autism. Eric, 16, died on Jan. 19, 2020, after being held down, sat on and handcuffed by deputies in a shopping center parking lot after he had an autism-related meltdown, an outburst resulting from emotional or sensory overload, according to lawyers representing his parents, Daren Parsa and Donna Lou.

In the lawsuit, Dr. Parsa and Dr. Lou charge that the authorities exhibited negligence and used excessive force while also violating their son’s civil rights and his rights under the Americans with Disabilities Act. Sheriff Joseph P. Program Helping People Leave Institutions Renewed After Years In Limbo. Shayne Nagel, right, comforts her daughter, Erin, who has autism. 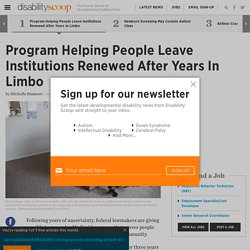 Erin lived at a state-run residential center for two years before moving into a triplex in the community with assistance from Washington state's Money Follows the Person program. (Bettina Hansen/The Seattle Times/TNS) Following years of uncertainty, federal lawmakers are giving new life to a popular Medicaid program that moves people with disabilities from institutions into the community. Money Follows the Person has been renewed for three years under legislation approved in late December. The Medicaid program gives states extra funds to provide employment, housing and other services to help people transition from nursing homes and other institutions to homes in the community.

Trump makes one last effort to cut Social Security, maximize hurt to the disabled. House Democrats on the Ways and Means Committee blasted the final rule on cutting out judges, which is set to take effect on Dec. 16. 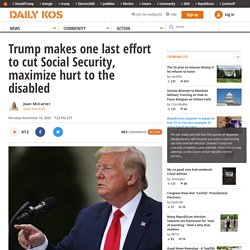 "For nearly two years, we’ve sounded the alarm that this change would erode due process for Social Security and Supplemental Security Income applicants and beneficiaries and threaten their access to their earned benefits. The rule puts unqualified agency staff in control of deciding appeals hearings and contradicts the congressional intent of the law governing such proceedings. " The rule would remove administrative law from taking up standard cases, conducting hearings, and issuing decisions on applications for disability benefits—all responsibilities currently reserved for them.

The Romanian Orphans Are Adults Now. Image above: Izidor Ruckel near his home outside Denver Updated at 3:22 p.m. 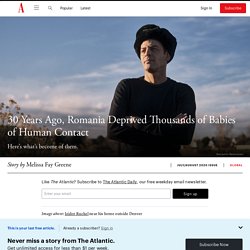 ET on June 23, 2020. For his first three years of life, Izidor lived at the hospital. The dark-eyed, black-haired boy, born June 20, 1980, had been abandoned when he was a few weeks old. The reason was obvious to anyone who bothered to look: His right leg was a bit deformed. To hear more feature stories, get the Audm iPhone app. Watch. Facebook. Special Books by Special Kids - Home. (3) Facebook. Disability in kids: Private special education school without restraint. 14-year-old Alex Campbell, who has autism, is one of the most powerful voices in the movement to better document and regulate restraint in schools. 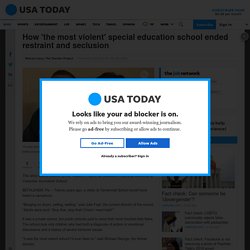 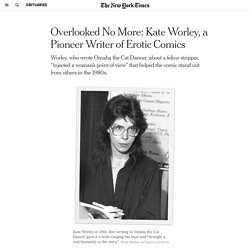 “It was my favorite review of all time,” Kitchen said. By 1995, Worley and Waller separated, and the adventures of Omaha went on hiatus for more than a decade. Worley married the writer Jim Vance and moved to Tulsa, Okla., where they had a son, Jacob, and a daughter, Sarah. Overlooked No More: Brad Lomax, a Bridge Between Civil Rights Movements. Alabama in 1963 was an epicenter of the civil rights movement, with lunch counter sit-ins, protest marches and other actions aimed at dismantling state-sponsored segregation.

There, for the first time, Brad encountered signs designating some public spaces for white people and some for Black people. After graduating from Benjamin Franklin High School in Philadelphia in 1968, Lomax considered joining the military, but as the war in Vietnam raged, with Black soldiers bearing a disproportionate share of the burden, he decided instead to attend Howard University in Washington.

Untitled. Cambry has been restricted to the pavement for most of her adult life. She’s paralyzed and gets around in a wheelchair. So, trying to help her go more places, her then-boyfriend Zack Nelson spliced together two electric bikes with a seat in the center. And it worked. Our failure to wear a mask is costing my son dearly - Opinion. 117 Photos COVID-19 in Florida through photos. NPR Choice page. Denied a diploma, April Dunn made sure other students with disabilities had options. She died of covid-19.

Does the coronavirus pandemic make someone who is disabled like me expendable? It is a strange time to be alive as an Asian American disabled person who uses a ventilator. The coronavirus pandemic in the United States has disrupted and destabilized individual lives and institutions. For many disabled, sick, and immunocompromised people like myself, we have always lived with uncertainty and are skilled in adapting to hostile circumstances in a world that was never designed for us in the first place. Want to avoid touching door handles by hitting the automatic door opener with your elbow? You can thank the Americans with Disabilities Act and the disabled people who made it happen. Technology, accessibility, and a hardcore will to live shaped me into a cyborg oracle ready to spill some hot truths. Trump seeks to bring back Social Security rule changes, one of Reagan's worst ideas. INVESTIGATION: Airlines damage thousands of wheelchairs - News - The Register-Guard - Eugene, OR.

After a United Airlines flight three years ago, Isabelle Briar ripped open her thumb as she pushed her wheelchair away from the gate. The airline had cracked the metal grip ring, leaving a sharp, protruding shard. The same airline ignored Cindy Otis’ complaint about damage to her power chair in 2006, responding weeks later and only after she had an attorney write a letter threatening to sue. In 2017, U.S. 'Game of Thrones' Star Peter Dinklage Makes Emmy Awards History. (1) Billie Eilish Gets Candid About Tourette Syndrome. Blind Engineer Invents A ‘Smart Cane’ That Uses Google Maps To Help Blind People Navigate. Trolls Tell Woman She’s ‘Too Ugly’ To Be Posting Pics Of Her Face, She Responds With 3 Selfies. Passport to Multicultural Literature. APD redesign prompts concerns about cutting services. What is autism? Lawmakers ordered Florida disability administrators this year to restructure its community-based Medicaid program that delivers healthcare to tens of thousands of people with disabilities.

Getting by: Autistic people who ace intelligence tests may still have trouble navigating public transportation or preparing a meal. Children's joy at seeing dolls like them. DeVos Defends $18 Million Cut to Special Olympics Funding While Asking Congress for $60 Million for Charter Schools. Florida’s 'prison Houdini' has a chance to be free after serving 35 years in jail. Child's elevated mental ill-health risk if mother treated for infection during pregnancy - University of Gothenburg, Sweden. News: Mar 07, 2019. Disabilities in Literature. MMR vaccine does not cause autism, another study confirms. Researchers used a population registry to evaluate whether the MMR vaccine increased the risk of autism in children born in Denmark between 1999 and 2010.

A total of 657,461 children were followed through August 2013, with the researchers documenting diagnoses of autism spectrum disorder as well as known risk factors including age of the parents, diagnosis of autism in a sibling, preterm birth and low weight at birth. Free Off-Road Wheelchairs Mean Adventure for All. Bill Would Prohibit Waiting Lists For Community-Based Services. Listen to a Gadget That Translates Thoughts Into Speech. Big Talk Researchers from Columbia University have created a system that translates thoughts into recognizable speech — and its potential impact on people who’ve lost their ability to speak is extraordinary.

Katie Price is right. Disabled people shouldn’t be forced off the internet by abuse. Bill in Congress Could Help People With Disabilities. 25-year-old Kenyan invents gloves that convert sign language into audio speech - Pulse Kenya. Study offers new insights into children with autism. Human rights body calls on US school to ban electric shocks on children. Imgur. With a limited on-screen presence, autistic characters have emerged in another medium: fan fiction. Medicaid work requirements: Where do they stand after the blue wave? This is what Trump’s caravan 'invasion' really looks like. Unseen Art: 3D Printing Classical Paintings for the Blind click 2x. One year old immediately hugs a stranger when he realizes they both have the same limb difference. Andre The Giant (2018) Stories from American Experience. The special needs education crisis is here. I know from my autistic son.