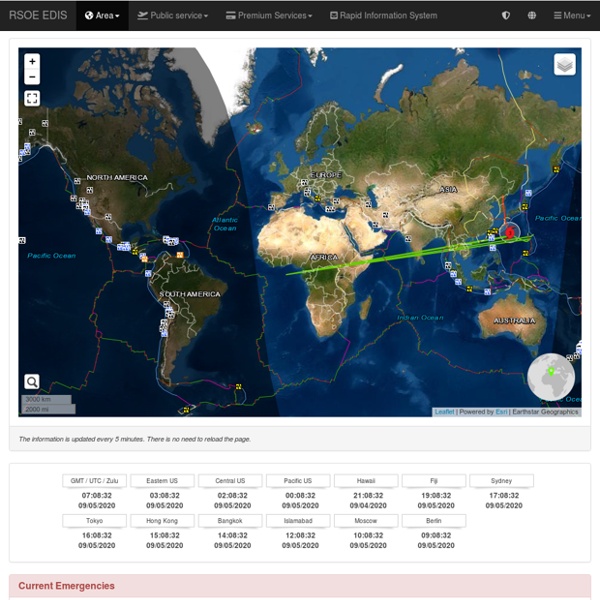 Live From The International Space Station! The International Space Station (ISS) is a habitable satellite that was launched on October 31 2000 and has had continued human occupation ever since, the longest on record. It's an observatory and research laboratory in low Earth orbit with crew conducting experiments in Biology, Physics and Astronomy, amongst other things. The station orbits the Earth every 90 minutes, and in 2010 it had racked up almost 60,000 orbits, accruing a whopping 1.5 billion miles. To give you an idea of its size, in total it's about the area of a U.S. football field, and weighs over 400,000 kilograms. You can see the ISS without a telescope; the best time is the few hours after sunset or before sunrise. If you want to take a look at what it's doing and have a sneaky peek at the crew whilst they're on duty, check out the live ISS stream here!

The Ocean Cleanup Plastics in the marine environment have become a major concern because of their persistence at sea, and adverse consequences to marine life and potentially human health. Implementing mitigation strategies requires an understanding and quantification of marine plastic sources, taking spatial and temporal variability into account. Here we present a global model of plastic inputs from rivers into oceans based on waste management, population density and hydrological information. Our model is calibrated against measurements available in the literature.

GoConqr para Professores <div class='alert alert-danger'> We have detected that Javascript is not enabled in your browser. The dynamic nature of our site means that Javascript must be enabled to function properly. Please read our <a href='/terms_and_conditions' target='_blank'>terms and conditions</a> for more information. </div> Mindmaps are predominately used for two things 1) Elaborating on and connecting ideas 2) Collaborating with others to brainstorm ideas.

Shamanic Journey Aldous Huxley was born on 26th July 1894 near Godalming, Surrey. He introduces the thought that spiritual insight and personal revelation can also be achieved through the use of hallucinogens. In the presence of an investigator/interviewer Aldous Huxley took four-tenths of a gram of mescaline in 1953. DIY Homemade Cough Drops...So Easy! With this effective recipe, you don't have to BUY any cough drops again! As you may have noticed, most store-bought throat lozenges or cough drops contain unpleasant ingredients, such as food colorings and preservatives. We don’t want these chemicals in our system at the best of times, and most definitely not when we are sick. There are a ton of products you can buy to medicate a cough, but did you know that a recent study found that honey is actually more effective in relieving night-time coughing in children than the leading ingredient in cough syrup? One thing that always seems to linger a little longer than the other symptoms is a cough.