Here's How To Prevent The Next School Shooting, Experts Say. After Parkland, there have been many calls to make schools a "harder target" — for example, by arming teachers. 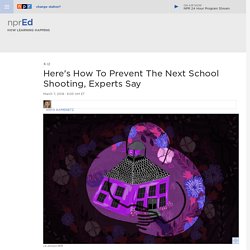 But there's a decent amount of research out there on what actually makes schools safer, and most of it doesn't point to more guns. On the Friday after the deadly shootings at Marjory Stoneman Douglas High School in Florida, Matthew Mayer, a professor at the Rutgers Graduate School of Education, got an email during a faculty meeting. The email was from Shane Jimerson, a professor at the University of California, Santa Barbara. Both specialize in the study of school violence. Law Center to Prevent Gun Violence. In 2010, guns took the lives of 31,076 Americans in homicides, suicides and unintentional shootings. 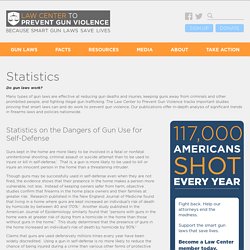 This is the equivalent of more than 85 deaths each day and more than three deaths each hour. Forget new gun laws. Here’s what could really keep people from shooting each other. President Obama relayed a message of hope and perseverance while delivering remarks at the memorial service for the five Dallas police officers killed by a sniper July 7. 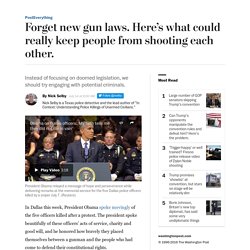 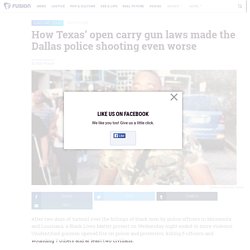 Unidentified gunmen opened fire on police and protesters, killing 5 officers and wounding 7 others and at least two civilians. Shortly after the shooting, the Dallas Police Department released a photo of a man it was searching for as a person of interest in connection with the killing. During a press conference, police said the man was carrying an AR-15 rifle and wearing camouflage gear. “We know that rifles were used to injure and kill Dallas officers,” said Dallas police chief David Brown. The man was quickly identified on Twitter as Mark Hughes, the brother of protest organizer Corey Hughes. Then video emerged of Mark Hughes calmly turning his weapon in to a police officer: This statistic about gun violence in America seems hard to believe, but is true. A data reading between the racial lines. 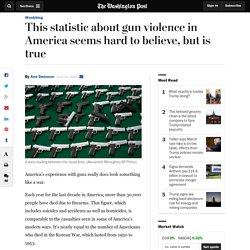 Texas mom killed by police after she shot two daughters to death, police say. When police pulled up to the manicured Houston subdivision Friday evening, after a flood of 911 calls directing them there, they found two young women lying in the street, their bodies bleeding from bullet wounds. 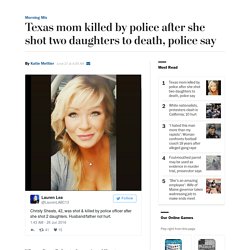 Nearby stood their mother, 42-year-old Christy Sheats. In her hand she held a gun. Authorities demanded she drop her weapon, according to the Fort Bend County Sheriff’s Office, but she refused. An officer with the Fulshear Police Department opened fire and shot the mother dead. Sheats’ husband and the girls’ father, Jason Sheats, watched the carnage unfold from afar. “He’s going through a very difficult time,” Fort Bend County Sheriff Troy Nehls told the Houston Chronicle. Having a Gun in the House Doesn't Make a Woman Safer - Evan DeFilippis. Christy Salters Martin is a professional boxer and the owner of a concealed carry permit. 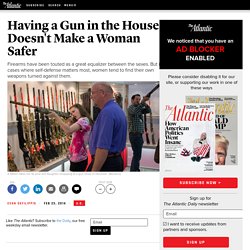 But when she attempted to leave her husband, she was shot with her own gun. Today, she cautions other women against making the same mistake. “Just putting a weapon in the woman’s hand is not going to reduce the number of fatalities or gunshot victims that we have. Too many times, their male counterpart or spouse will be able to overpower them and take that gun away.” Wayne LaPierre, executive vice-president of the National Rifle Association, has argued that firearms are a great equalizer between the sexes. A recent meta-analysis concluded what many people already knew: the availability of firearms is a strong risk factor for both homicide and suicide. It has long been recognized that higher rates of gun availability correlate with higher rates of female homicide. 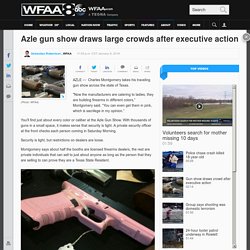 "Now the manufacturers are catering to ladies, they are building firearms in different colors,” Montgomery said. “You can even get them in pink, which is sacrilege in my opinion.” You'll find just about every color or caliber at the Azle Gun Show. Texas universities likely to permit guns in classrooms. The thousands of professors who attend the Modern Language Association's annual conventions usually talk literature, linguistics and language. 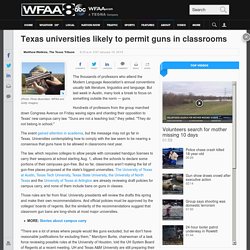 But last week in Austin, many took a break to focus on something outside the norm — guns. Hundreds of professors from the group marched down Congress Avenue on Friday waving signs and chanting their opposition to Texas' new campus carry law. Texas zoos struggle to limit guns under new laws. The next battle over gun rights in Texas may take place in an unlikely setting: the zoo. 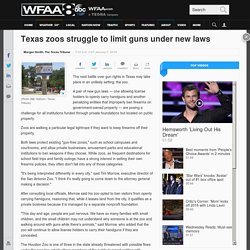 A pair of new gun laws — one allowing license holders to openly carry handguns and another penalizing entities that improperly ban firearms on government-owned property — are posing a challenge for all institutions funded through private foundations but located on public property. Zoos are walking a particular legal tightrope if they want to keep firearms off their property. Both laws protect existing "gun-free zones," such as school campuses and courtrooms, and allow private businesses, amusement parks and educational institutions to ban weapons if they choose. While zoos, as frequent destinations for school field trips and family outings, have a strong interest in setting their own firearms policies, they often don't fall into any of those categories. "It's being interpreted differently in every city," said Tim Morrow, executive director of the San Antonio Zoo. Read or Share this story: Thinking Rationally About Terror.

Earlier this winter, in the first week of December, I set sail for Antarctica. During the cruise, which was arranged by the Origins Project, an academic institute that I run, I was to give a series of lectures about cosmology and other topics. 'New York Times' puts gun debate editorial on Page One. The New York Times published a front-page editorial Saturday on gun control, the legendary newspaper's first front-page oped since 1920. Video provided by Newsy Newslook The New York Times published an editorial on its front page for the first time in nearly 100 years, one calling for greater steps on gun control. When Gun Violence Meets Ideology. San Bernardino is No. 13—the thirteenth mass public shooting in the United States in the past week.

Most of the others—in Boston, Houston, Sacramento—haven’t received much national news attention, because Americans are still absorbing the horror of what happened last week, when, on the day after Thanksgiving, a man named Robert Lewis Dear, Jr., was arrested after going on a rampage at a Planned Parenthood clinic in Colorado Springs, killing three people and injuring nine others. It’s too soon to know what led to the killings in San Bernardino, but it’s a strange fiction to pretend, as we often do, that we have yet to understand what led us to this broader moment.

Some of the reasons are in plain sight, and have been for decades. In the early nineteen-eighties, Louis Beam was an active but frustrated leader of the radical American right-wing fringe. Domestic Terrorism and America’s Gun Dilemma. Is there anything left to say about America’s self-destructive passion for firearms? Perhaps this. From a theoretical point of view, we are faced with a classic collective-action problem.

Clearly, it would be in everybody’s interest if there were far fewer guns out there, especially fewer of the military-style weapons that also lend themselves to the massacre of civilians—as we discovered yet again on Wednesday, when, according to officials, a twenty-eight-year-old man, Syed Farook, and a twenty-seven-year-old woman, Tashfeen Malik, opened fire at an office party in San Bernardino, California, killing at least fourteen people and injuring seventeen. But since there are already an estimated three hundred million guns in private hands (nobody knows the exact number), and U.S. gun laws are so lax that many Americans believe that they need a weapon, or many weapons, to defend themselves and their families.

How Often Do Mass Shootings Occur? On Average, Every Day, Records Show. Photo More than one a day. That is how often, on average, shootings that left four or more people wounded or dead occurred in the United States this year, according to compilations of episodes derived from news reports. Including the worst mass shooting of the year, which unfolded horrifically on Wednesday in San Bernardino, Calif., a total of 462 people have died and 1,314 have been wounded in such attacks this year, many of which occurred on streets or in public settings, the databases indicate. It is impossible to know whether the number of such shootings has risen in recent years because the databases go back only a couple of years. More data is available for mass shootings calculated by a different standard, one used by congressional researchers and other experts who study mass killings: four or more dead.

Where gun stores outnumber museums and libraries. Boy fatally shoots mom in accident at Idaho store. Guns, shootings, etc. IPV_Guns. ShootingTracker.com. Forget about changing the Second Amendment. And stop focusing on mass killings. One map that puts America's gun violence epidemic in perspective. The United States owns way, way more guns per capita than the rest of the world. Marco Rubio Pushes Conspiracy Theory On Obama And Guns. From 2004 to 2014, over 2,000 terror suspects legally purchased guns in the United States.