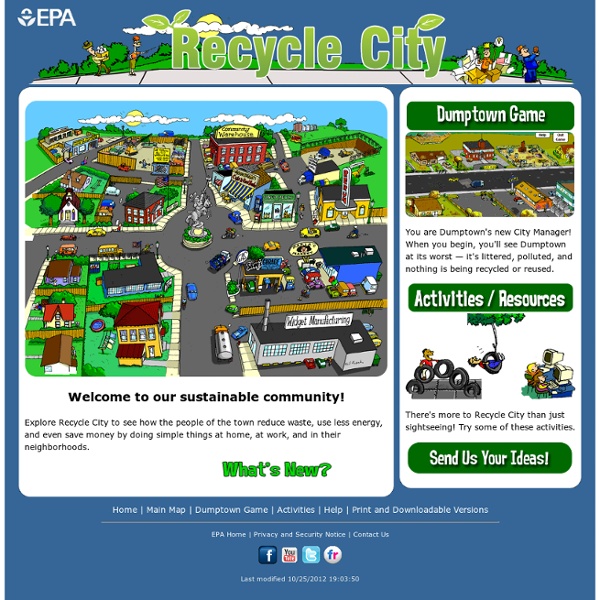 You are Dumptown's new City Manager! When you begin, you'll see Dumptown at its worst — it's littered, polluted, and nothing is being recycled or reused. There's more to Recycle City than just sightseeing! Try some of these activities.

A Terrifying, Fascinating Timelapse of 30 Years of Human Impact on Earth - Emily Badger A new interactive project from Google, NASA and the US Geological Survey. Since the 1970s, NASA and the U.S. Geological Survey have been amassing satellite images of every inch of our planet as part of the Landsat program. Over time, the images reveal a record of change: of cities expanding, lakes and forests disappearing, new islands emerging from the sea off the coast of rising Middle East metropolises like Dubai. If you could thumb through these historic pictures as if in a flip book, they would show stunning change across the earth's surface, in both our natural environments and our man-made ones. Now, the digital equivalent of that experience is possible – three decades of global change as GIF – in a project unveiled today between NASA, the USGS, TIME, Google, and the CREATE Lab at Carnegie Mellon University. Landsat images taken between 1984 and 2012 have been converted into a seamless, navigable animation built from millions of satellite photos. The above image shows Dubai in 2011.