Aurora Borealis Forecast. Everything You Need to know. 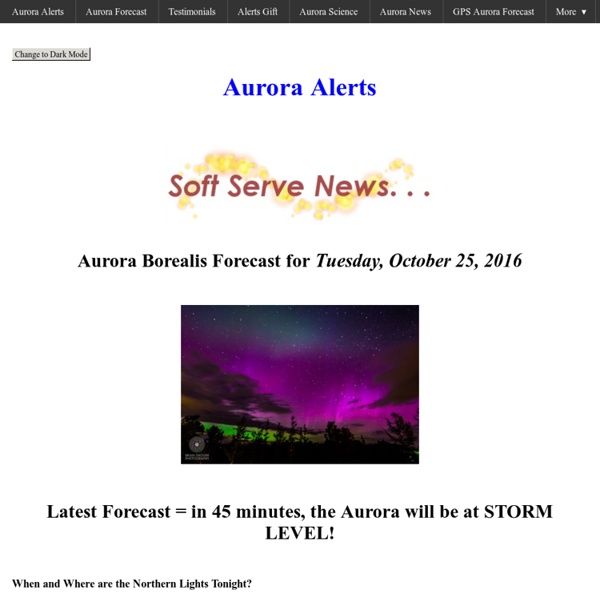 By JIM THOMAS -- Soft Serve News Auroras are difficult to predict with precision. They have stops and starts (known as sub-storms). If you are out there, you need to be patient and lucky. Here are some tools that will increase your chances. Here is the prediction of storm intensity for the next few minutes (the higher the Kp number, the larger the Aurora): The Space Environment Center's Neural Net Program estimates that . . . in 15 minutes, the Geomagnetic Activity level (Kp number) will be 7 -- at STORM LEVEL! Why miss your Aurora? Now, find the Kp number line on one of the following maps that matches the Kp number predicted above. It's critical to get confirmation of activity with NOAA's Ovation map. It's a great sign if you see a thick aurora band with some areas of light yellow, orange or, better yet, RED on this map as opposed to just a thin (or transparent) band with only dark green. (Story continues below) Want free access to the Aurora three day forecast? Dark. Why? Related:  Weather

Portland Oregon and Northwest Weather for Astronomical Observing Wonder How To » How To Videos & How-To Articles SpaceWeather.com -- News and information about meteor showers, solar flares, auroras, and near-Earth asteroids Back-to-Back Sun Storms May Supercharge Earth's Northern Lights Powerful solar flares from the sun this week may amplify the northern lights displays over parts of the northern United States through the weekend, space weather scientists say. The forecast for potentially supercharged auroras comes after powerful solar storms fired off eruptions of solar material, first on Monday (Sept. 8), then again on Wednesday (Sept. 10). During Wednesday's solar flare, the sun unleashed a major X1.6-class flare directly at Earth. "The most intense storming is expected tomorrow, Friday night into Saturday morning," William Murtagh, program coordinator for the U.S. The northern lights dance over Earth in shimmering green light on Aug. 29, 2014 in this amazing photo by European Space Agency astronaut Alexander Gerst on the International Space Station. Have You Ever Seen the Northern Lights or Southern Auroras? It is solar material from the earlier solar flare this week that could spark amplified auroras on Thursday night. Solar storm warning A dark sky also helps.

Article 61 of the Magna Carta Magna Carta Article 61 Preliminary. This was written from the point of view of the monarch at the time (King John), consequently "we" and "us", etc, refer to the monarch. Here is Article 61 in its entirety. All we need is "25 Barons" (who are decent and honest human beings). Note to debunkers, legal eagles, constitutional lawyers & other superior beings, etc: The Magna Carta was written in Mediaeval Latin and translated into English, and I am English. Furthermore the original (1215) Magna Carta pre-dates any 'parliament'. Article 61 But since we have granted all these things aforesaid, for GOD, and for the amendment of our kingdom, and for the better extinguishing the discord which has arisen between us and our Barons, we being desirous that these things should possess entire and unshaken stability for ever[1], give and grant to them the security underwritten[2]; End of Article 61. Notes. [1]. [2]. [3] Who elects the Barons in the first place? [4] Security entirely due to peace and liberties?

Save Our Earth : Its an Illusion by John Harris. Please read each and everyone of you, this is so important What you are about to read may at first confuse some of you, some may not believe and some will be shocked. What you are about to read is truth and I urge you all to stay and read all this information and understand it because it concerns you and it concerns your children and all your property. Lawful Rebellion The British Constitution Group Stoke on Trent 24th January 2009 Its an illusion (Transcript on a talk by John Harris called ‘Its an illusion’ from The People’s United Community www.TPUC.org ) To watch the video please go to What I want to do today is show you a different perspective. (Slide shows the following;) Do you believe ‘parliament’ to be elected to ‘REPRESENT’ the people and their wishes? Do you believe in ‘POLITICS’? Do you believe that the only way to sort this country out is to get another ‘POLITICAL PARTY’ elected into power? Do you believe ‘ACTS’ of parliament (STATUTES) are ‘LAW’? Do you believe ‘STATUTORY INSTRUMENTS’ are ‘LAW’? Its been abused.

Spectacular Auroras Could Be Visible In Parts Of The US This Weekend NASA Solar Dynamics Observatory Three-wavelength composite image depicting the eruption of the X1.6 class solar flare at 1:46 EDT, September 10. Aurora borealis, produced by coronal mass ejections, will be visible throughout the northern U.S. The solar flare that erupted on Wednesday will be putting on a spectacular show this weekend, when the second of two coronal mass ejections - charged gases shooting out from the sun - is projected to arrive. These powerful solar storms will produce auroras that will potentially be visible in the central and northeastern U.S. during the late hours on Friday and Saturday, according to Tony Phillips at spaceweather.com. Here's a helpful AccuWeather map of where the aurora will appear: AccuWeather Predicted aurora visibility for the night of Friday, September 12. For any intrepid sky-watchers who are lucky enough to be in the visibility zone, the best time to look up will be after midnight, in every time zone, on Friday and Saturday.

UPDATED – Using Googles Full Capabilities « XBOX, XBOX 360, PS2, PS3, PSP, & MORE! – Your source for the latest in console modding. Here is an updated version of the ‘Using Google’s Full Capabilities’. This is basically a master list found on a Russian hacking website. To save you the dangers of going there, we’ve compiled it here. Enjoy. Each of these things can be copied and pasted into Google search for some good old fashioned fun! admin account info” filetype:log ! Code: nurl:/admin/login.asp inurl:/cgi-bin/sqwebmail? “Warning: mysql_connect(): Access denied for user: ‘*@*” “on line” -help -forum “Warning: mysql_query()” “invalid query” “Warning: pg_connect(): Unable to connect to PostgreSQL server: FATAL” “Warning: Supplied argument is not a valid File-Handle resource in” “Warning:” “failed to open stream: HTTP request failed” “on line” “Warning:” “SAFE MODE Restriction in effect.”

SWPC Tips on Viewing the Aurora NOAA / Space Weather Prediction Center Being able to see the Aurora depends mainly on two factors, geomagnetic activity (the degree of disturbance of the earth's magnetic field at the time) and your geographic location. Further considerations are the weather at your location, and light pollution from city lights, full moon and so forth. Geomagnetic Activity -- The Kp Index and the NOAA POES Auroral Activity Level In order to know whether you have a chance of seeing an aurora, you need to know the level of geomagnetic activity at the time you are viewing. Location, location, location! In general, you are more likely to see an aurora if you are at a high latitude, i.e. closer to the north (or south) pole. In the table below, find a city not far from where you live, and make a note of its magnetic latitude. When geomagnetic activity is low, the aurora typically is located, in the hours around midnight, at about 67 degrees magnetic latitude*. Kp maps of midnight equatorward boundaries

Do these mysterious stones mark the site of the Garden of Eden? By Tom Knox Updated: 11:10 GMT, 5 March 2009 For the old Kurdish shepherd, it was just another burning hot day in the rolling plains of eastern Turkey. Following his flock over the arid hillsides, he passed the single mulberry tree, which the locals regarded as 'sacred'. The bells on his sheep tinkled in the stillness. Then he spotted something. The man looked left and right: there were similar stone rectangles, peeping from the sands. They certainly were important. The site has been described as 'extraordinary' and 'the most important' site in the world A few weeks after his discovery, news of the shepherd's find reached museum curators in the ancient city of Sanliurfa, ten miles south-west of the stones. They got in touch with the German Archaeological Institute in Istanbul. As he puts it: 'As soon as I got there and saw the stones, I knew that if I didn't walk away immediately I would be here for the rest of my life.' Schmidt stayed. So far, so remarkable. And so, paradise was lost.

The Aurora Borealis (The Northern Lights) – Everything you need to know | Natalia Robba's Blog Hey fellow Aurora fans! After several years of research, kilometers travelled, multiple destinations visited, dark drives down foreign icy roads, snow storms, disappointment, exhilaration, several failures but more successes, here is my two cents on everything Aurora Borealis First off, before I start I wanted to elaborate a little on the above. I’ve always held a certain fascination for the Northern Lights. My earliest memory was a documentary on the Discovery channel on Antartica when I was around 12 years old. Being a 12 year old though has it’s drawbacks =) Being completely at the mercy of my parents destination wishlist meant that I wouldn’t really get to chase this dream until a little later on. So I studied, left school, and started working. I researched everything from Solar cycles, weather patterns, prediction techniques and annual aurora statistics to ideal destinations under the Auroral Oval. What causes the Aurora Borealis? Aaah the Sun =) The beautiful Sun! Ivalo, Finland