Guns in the US

Nra-losing-money-financial-issues-trouble-gun-lobby-lawsuit-a8476671. ‘We have good kids to protect’: the Texan schools where staff carry guns. For the past 18 months, the British photojournalist Spike Johnson has been touring Texan high schools, talking to the armed superintendents who work there and who believe passionately that civilians have a greater role to play in protecting American children. 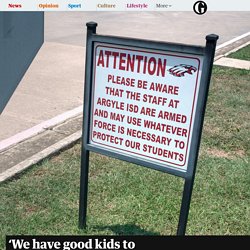 At least 10 states across the US now allow school staff access to firearms, kept in lock boxes or inside vehicles, in a scheme known as the school marshal programme. In Texas, though, more than 170 schools go a step further, allowing employees to carry weapons under a shirt or in an ankle holster. Gun owners fear assault weapons ban will force them “back in the closet” just like gay people. After the horrific school shooting in Parkland, Flordia earlier this year, the city council in Boulder, Colorado voted unanimously on an ordinance banning assault weapons, bump stocks, and high capacity magazines within city limits. 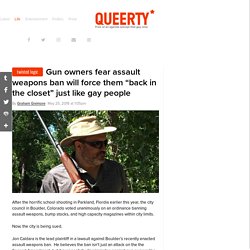 Now, the city is being sued. Jon Caldara is the lead plaintiff in a lawsuit against Boulder’s recently enacted assault weapons ban. He believes the ban isn’t just an attack on the the Second Amendment, but it purposefully discriminates against gun owners like himself in a way that would never–never! Malcolm Gladwell on School Shootings, and the Return of Paul Schrader. Oliver North Blames ‘Culture of Violence’ for Mass Shootings. The Santa Fe Shooting: “This Is a Dream I Can't Wake Up From” Stephen Bland is a seventeen-year-old junior at Santa Fe High School, in Santa Fe, Texas. 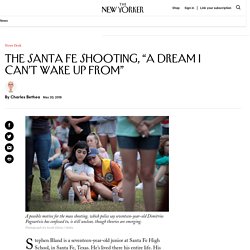 Santa Fe school shooting shows, again, we are not listening. ‘This Is America’: 8 Things to Read About Childish Gambino’s New Music Video. Childish Gambino - This Is America. America’s unique gun violence problem, explained in 17 maps and charts. After mass shootings in Odessa and Midland, Texas, and Mobile, Alabama, this weekend, Americans are confronting the country’s unique relationship with guns. 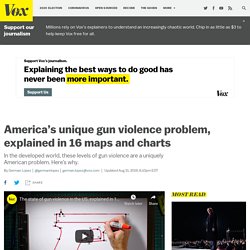 America is certainly an exceptional country when it comes to firearms. It’s one of the few countries in which the right to bear arms is constitutionally protected. But the relationship is unique in another crucial way: Among developed nations, the US is far and away the most homicidal — in large part due to the easy access many Americans have to firearms. These maps and charts show what that violence looks like compared with the rest of the world, why it happens, and why it’s such a tough problem to fix. 1) America has six times as many firearm homicides as Canada, and nearly 16 times as many as Germany This chart, compiled using United Nations data collected by Simon Rogers for the Guardian, shows that America far and away leads other developed countries when it comes to gun-related homicides.

Please Don’t Get Murdered at School Today. Do you have everything? 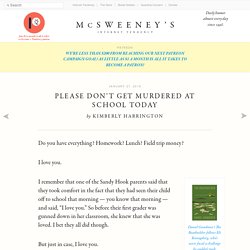 Homework? Lunch? Field trip money? I Tried to Befriend Nikolas Cruz. He Still Killed My Friends. PARKLAND, Fla. — My first interaction with Nikolas Cruz happened when I was in seventh grade. 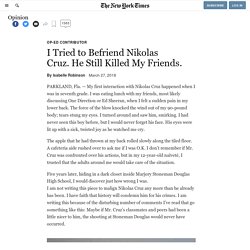 I was eating lunch with my friends, most likely discussing One Direction or Ed Sheeran, when I felt a sudden pain in my lower back. The force of the blow knocked the wind out of my 90-pound body; tears stung my eyes. I turned around and saw him, smirking. The AR-15: Americans' Best Defense Against Terror and Crime. The Things We Know About School Shooters. How to Reduce Shootings. How the N.R.A. Uses Fear to Sell Guns. Mike Weisser runs a blog called Mike the Gun Guy and describes himself as a “gun nut beyond all gun nuts.” 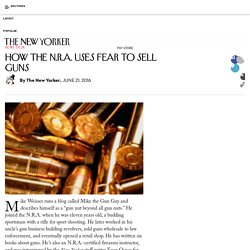 He joined the N.R.A. when he was eleven years old, a budding sportsman with a rifle for sport shooting. He later worked in his uncle’s gun business building revolvers, sold guns wholesale to law enforcement, and eventually opened a retail shop. He has written six books about guns.

Toddlers have shot at least 23 people this year. (Karen Bleier/AFP/Getty Images) This past week, a Milwaukee toddler fatally shot his mother after finding a handgun in the back seat of the car they were riding in. 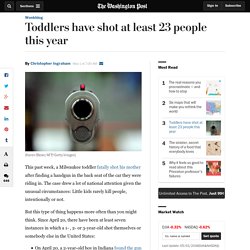 The case drew a lot of national attention given the unusual circumstances: Little kids rarely kill people, intentionally or not. But this type of thing happens more often than you might think. Since April 20, there have been at least seven instances in which a 1- , 2- or 3-year-old shot themselves or somebody else in the United States: A researcher explains the sad truth: we know how to stop gun violence. But we don't do it. Every day in America, about 31 people are killed in gun homicides. 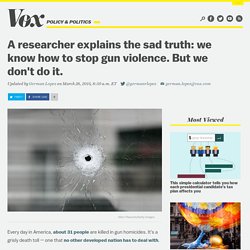 It's a grisly death toll — one that no other developed nation has to deal with. The political response to this violence has focused on gun control. But while the research shows gun control is truly effective, federal legislation curtailing access to guns seems unlikely to happen anytime soon. So what can America do to stop gun violence? A new, major report from Harvard University researchers Thomas Abt and Christopher Winship reviewed the evidence, putting together the big take from 43 reviews of the research that covered more than 1,400 individual studies, while following up with on-the-ground fieldwork across the US and Latin America. But the findings aren't exactly new or shocking. The N.R.A. Reimagines Classic Fairy Tales, With Guns. 'Oh, what a big gun you have': NRA re-writes fairytales to include firearms.

The US pro-gun lobby is entertaining its younger members with its own take on classic fairytales, but they have a unique twist: firearms. 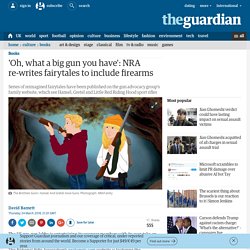 The National Rifle Association’s nrafamily.com website is featuring the pro-firearms stories. 'Refuse to Be a Victim,' and More Lessons for Women from the NRA. I'm sitting inside a storefront in Orange, CA, trying not to look at myself in the floor-to-ceiling, wall-to-wall mirror. A large metal chain, where a punching bag surely hangs sometimes, peeks out from the perforated ceiling. A rack of dumbbells sits next to a workout bench. On another wall, a bookshelf packed with books about gun ownership and magazines like Survivalist and S.W.A.T. sits a few feet from a five-foot-tall safe, which our instructor ensures us is full of guns.

This is the NRA's "Refuse to be a Victim" training seminar, which for years has been replicated in every state across the country. In total, there are six middle-aged men in the room, including our instructor. Gun-loving Florida mom shot by 4-year-old son hours after bragging he ‘gets jacked up’ to shoot.

Silence Broken: A Mother's Reckoning (Sue Klebold Interview) Armed Texans Celebrate State’s New Open-Carry Status. Photo AUSTIN, Tex. — For decades, the south steps of the State Capitol have served as a staging area for rallies on issues ranging from abortion to immigration rights, but Friday was the first time that demonstrators walked around here with handguns on their hips. On a chilly, overcast day, more than 100 Texans gathered carrying an array of holstered weaponry — Glocks, Smith & Wessons and more — to mark a change in the law that lets them openly display the fact that they are armed.

The practice had been banned in Texas since 1871. Similar demonstrations were held in several other Texas cities. The Riddle of the Gun (Revisited) Why do some mass shootings make the news and some don't? - BBC News. Image copyright Google Last week, a gunman killed nine people at a community college in Oregon. Several hours later, another man shot three in Florida. Only one made international news. Walter "Buzz" Terhune was a Vietnam veteran who moved to Florida to care for his elderly parents. He loved kids, helping other veterans and participating in civic life in tiny Inglis, a commercial fishing town near Florida's west coast.

Why Gun Lovers Don’t Get To Grieve Another Massacre With Me. I am grieving again today. Once more I am mourning the senseless execution of beautiful souls torn to shreds in the prime of their lives and in the middle of their ordinary. I am grieving more premature funerals and canceled weddings and discarded futures—and I want to be alone right now. Gun lover, please don’t tell me you’re grieving along with me today too.

I just don’t think I want your company right now. If you’re still against greater gun control measures—you don’t get to grieve with me today. Not again. 4 Pro-Gun Arguments We're Sick of Hearing. An Australian's view on America's... - Occupy Democrats. 994 mass shootings in 1,004 days: this is what America's gun crisis looks lik... Fear by Marilynne Robinson. America is a Christian country. Newsweek. Jim Jefferies - Gun Control - Full Length Official Clip. Gun violence: who's accountable when a child is charged with manslaughter?