Can a 3D printer make guns? - Video - Business News. The First Entirely 3D-Printed Gun Is Here. 3D-Printed Gun Fires Real Bullets. Watch This Guy Fire 600 Rounds With A Partially 3-D Printed Gun. Welcome to the Age of the Printed (Gun) Magazine. Feb 20, 2013 6:01am Plastic ammunition magazines for guns, made with a 3-D printer. 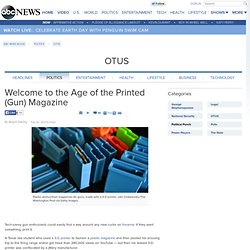 Jahi Chikwendiu/The Washington Post via Getty Images. Tech-savvy gun enthusiasts could easily find a way around any new curbs on firearms: If they want something, print it. 3D Printing Gun: Dangers and Benefits of the Technology (+Videos) Defense Distributed calls itself a “wiki weapon project.” 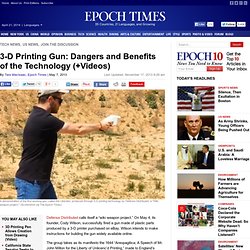 On May 4, its founder, Cody Wilson, successfully fired a gun made of plastic parts produced by a 3-D printer purchased on eBay. Wilson intends to make instructions for building the gun widely available online. The group takes as its manifesto the 1644 “Areopagitica; A Speech of Mr. John Milton for the Liberty of Unlicenc’d Printing,” made to England’s Parliament. The Areopagitica defends freedom of speech and expression. In a short documentary film published by Motherboard on March 25 (see video below), Wilson, 25, discusses the implications of enabling the general public to make weapons with 3-D printing. 3-D printing uses a variety of materials (usually plastic) to “print” an object from computer designs. “If we gave it away, opensource style, what would that mean?”

His gun, which was still in the experimental phase at the time the documentary was filmed, included some parts ordered online. The next front in the gun control debate. Cody Wilson of Defense Distributed testing out the "Cuomo Clip" -- a 3D printed gun clip. 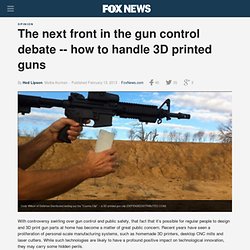 (DefenseDistributed.com) With controversy swirling over gun control and public safety, that fact that it’s possible for regular people to design and 3D print gun parts at home has become a matter of great public concern. Recent years have seen a proliferation of personal-scale manufacturing systems, such as homemade 3D printers, desktop CNC mills and laser cutters. While such technologies are likely to have a profound positive impact on technological innovation, they may carry some hidden perils. Making your own gun has always been technically possible, even before the advent of low-cost design and manufacturing tools. Today, with just a design blueprint, a general purpose 3D printer, and some durable printing plastic, people with relatively low engineering skills can fabricate a working gun in the privacy of their own home.

3D Printed Guns Take Aim at U.S Reforms. 3D printed guns and gun parts could bypass future attempts at greater gun control With the recent school shooting tragedy at Sandy Hook there is a renewed call for stricter gun control with the US government set to tighten ownership guidelines. 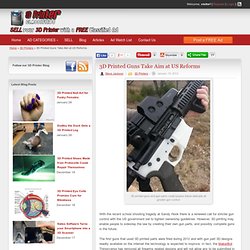 However, 3D printing may enable people to sidestep the law by creating their own gun parts, and possibly complete guns in the future. The first guns that used 3D printed parts were fired during 2012 and with gun part 3D designs readily available on the internet the technology is expected to improve. In fact, the MakerBot Thingyverse has removed all firearms related designs and will not allow any to be submitted in the future. Defense Distributed then stepped in to provide the files required 3D printable gun parts and leads development in this area.

Is Downloading and Manufacturing a 3D-Printed Gun Illegal? When Cody Wilson, the world's most well-known 3D-printing gunsmith, unveiled his coveted, entirely 3D-printed handgun Monday, he didn't — unlike a careful magician — keep his tricks to himself. 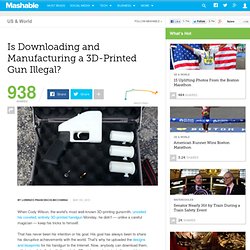 That has never been his intention or his goal. His goal has always been to share his disruptive achievements with the world. That's why he uploaded the designs and blueprints for his handgun to the Internet. Now, anybody can download them, with just a click. And, with the aid of a 3D printer, anybody is, in theory, able to reproduce Wilson's handgun. But before anybody clicks, downloads and prints, they better ask themselves these simple questions: Is that illegal?

These are the questions that the community around Wilson and his non-profit, Defense Distributed, are asking themselves. The answers lie in a 1988 law called the Undetectable Firearms Act, which had the goal of banning the production of plastic guns, as they are capable of passing through a metal detector without being spotted. NY Lawmaker Goes After 3D-Printed Guns. 3-D Printer Guns Get US Approval. WASHINGTON, March 19 (RIA Novosti) - A Texas firm aiming to manufacture guns using a 3-D printer – and publicly share the online files with anyone who wants to do the same – has been issued a license to build and sell 3-D weapons from the US Bureau of Alcohol, Tobacco and Firearms (ATF). 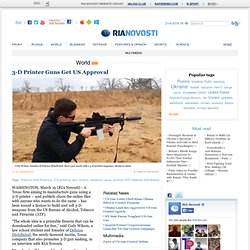 “The whole idea is a printable firearm that can be downloaded online for free,” said Cody Wilson, a law school student and founder of Defense Distributed, the newly-licensed Austin, Texas company that also promotes 3-D gun making, in an interview with RIA Novosti. “One day it will be possible, when pretty much everybody has a 3-D printer, for anyone to download a free file and print out a gun, anywhere in the world. And your government would have nothing to say about it,” he said.

"Look who has a license to manufacture firearms," declared a posting on the Facebook page for Defense Distributed over the weekend, with an apparent photo of the new license. “How’s that national conversation going?” US Rep. PRINTABLE 3D GUN Creator Cody Wilson Meets With Alex Jones. The SYSTEM is SCARED. 3D Printed Guns Documentary Film In The Works. In this continuing advocacy of us to have an Airsoft CAD Depository Project to create an online source of freely shared and freely downloadable designs of airsoft guns and parts (and anything related to the preservation and promotion of airsoft via 3D printing), we want to point out this ongoing documentary project of the 3D Printed Gun where the Airsoft CAD concept took its inspiration from. 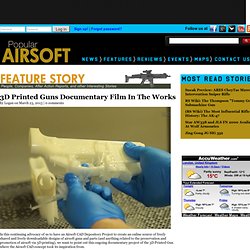 With no date announced yet on its release, what you can expect for this documentary project is that it is produced by Motherboard and will appear on Vice. Unfamiliar names? It's best if you click on the links and if you like what you see, you might as well subscribe to them. New test: Printing a gun on a Cube 3D home printer. Feb.20, 2013 Anyone with a computer is able to download the plans for guns and turn them into real gun parts. 30-year-old software engineer Travis Lerol uses a 3D printer to make a lower receiver for an AR-15 at his home. 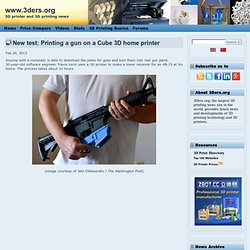 The process takes about 10 hours. (image courtesy of Jahi Chikwendiu / The Washington Post) Lerol said he has no plans to print anything outlawed by the government. Making guns for personal use is legal in U.S. "There's really no one controlling what you do in your own home," says Travis Lerol. The Undetectable Firearms Act and 3D-printed guns (FAQ) Citing the threat of plastic, 3D-printed firearms, U.S. 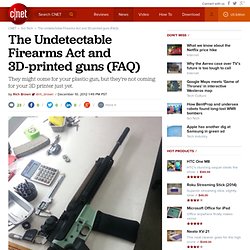 Rep. Steve Israel, D-N.Y., held a press conference this weekend calling for the renewal of the Undetectable Firearms Act. The act was originally conceived in 1988 in response to the Glock 17, a handgun with some components made from plastic composites. The law has been renewed several times since its inception, most recently in 2003. It's currently due to expire in December 2013. 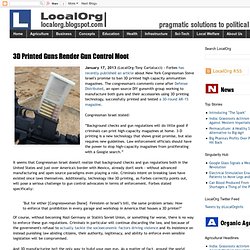 At that time, the United States Department of Justice told Ars that Wilson's initiative was completely legal. On Monday afternoon at 5pm CT, Wilson is scheduled to give a talk at the South by Southwest (SXSW) conference in Austin, where he plans on announcing the next phase of his existing nonprofit organization, Defense Distributed. He's already released a promo video in advance of the talk.

Wilson's new company is called DefCAD, and public records show it was registered as a Delaware corporation on March 4, 2013. Wilson told Ars that this new company will expand the work DefCAD.org has been doing so far. 3D Printed Guns (Documentary) Wiki Weapon - 3D Printable Gun - Defense Distributed. Cody Wilson: 3-D gun printing 'by the end of April' The Grizzly: First Fully 3D Printed Rifle Gets a Shot Off. This is an update to the ongoing progress with 3D printed weapons.

Activist Post The eyes of the world are on the innovation of 3D printing. Naturally, whenever a new technology is created that offers open-source DIY opportunities to the average individual, it is going to make governments and their protected corporate interests very nervous. Such is the case with 3D weapons manufacturing. Defense Distributed has led the way with their innovations, sparking others to provide their own offerings. So far all 3D guns have been produced from composite materials, which has led to instability in real-world firing situations.