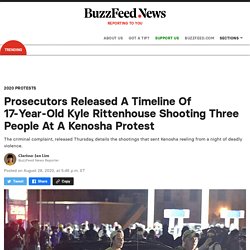 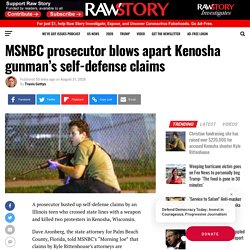 Dave Aronberg, the state attorney for Palm Beach County, Florida, told MSNBC’s “Morning Joe” that claims by Kyle Rittenhouse’s attorneys are contradicted by video evidence and undermined by the law. “His lawyers are setting up for a self-defense claim,” Aronberg said. “Keep in mind he was the one that put the night of violence in motion. He was the one that travelled across state lines as a 17-year-old, to possess a weapon he was not allowed to possess, to stand guard outside a used car lot that no one asked him to stand guard at.” “So he was the initial aggressor, and under the initial aggressor doctrine, he’s not allowed self-defense unless he makes it clear he’s abandoning the fight or others come at him using excessive force, and according to videos doesn’t look like either of those claims hold water,” he continued.

Live updates: Deadly shooting at Pensacola naval base. The suspected shooter was training at the US Naval Air Station in Pensacola for two years, according to Defense Department spokesperson Christopher Garver. 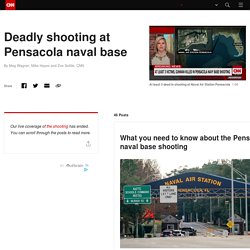 Two law enforcement sources tell CNN the suspect's name is Mohammed Alshamrani. Alshamrani's training began in August 2017 and was scheduled to conclude in August next year, Garver said. His training program included English language training, basic aviation, and initial pilot training. The training was funded by the Kingdom of Saudi Arabia. White man shoots 15-year-old black boy in head while he backs away with hands up: police. Enjoy this piece? 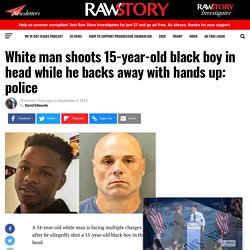 … then let us make a small request. Like you, we here at Raw Story believe in the power of progressive journalism — and we’re investing in investigative reporting as other publications give it the ax. Raw Story readers power David Cay Johnston’s DCReport, which we've expanded to keep watch in Washington. We’ve exposed billionaire tax evasion and uncovered White House efforts to poison our water. We’ve revealed financial scams that prey on veterans, and legal efforts to harm workers exploited by abusive bosses.

Raw Story is independent. We need your support to keep producing quality journalism and deepen our investigative reporting. Motorcycle rider arrested in shooting death of cyclist. Altercation that leads to shooting on Rickenbacker Causeway is captured on Facebook Live video Kadel Piedrahita, a cycling enthusiast who live-streamed a violent rant about a fellow biker before a morning ride earlier this week across the Rickenbacker Causeway, was arrested Friday in the fatal shooting of the man during an altercation that was caught live on video. 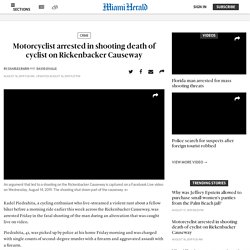 Piedrahita, 41, was picked up by police at his home Friday morning and was charged with single counts of second-degree murder with a firearm and aggravated assault with a firearm. Report details teen’s prior urge to ‘shoot up the school’ Copyright © 2019 Albuquerque Journal Eleven months before police say 16-year-old Joshua Owen walked into Cleveland High School and tried to shoot three students, he told officers voices were telling him to “shoot up the school,” according to a police report. 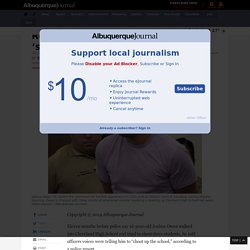 Owen, then a freshman, was not charged in that incident and was taken to Kaseman Presbyterian Hospital for a mental health evaluation. It is unclear what action school officials took in response. Bethany Pendergrass, a spokeswoman for Rio Rancho Public Schools, said the district could not discuss any matters involving students. “It is important that parents and community members know that we take all threats very seriously, and fully investigate all rumors, reports and information concerning threats to our schools,” Pendergrass said.

Chaos at the Capitol as House passes gun legislation » Albuquerque Journal. SANTA FE – Procedural warfare erupted on the floor of the state House late Friday – as legislative staffers locked doors to the chamber and chased down missing lawmakers – before Democrats pushed through legislation that would require a background check on nearly every firearm sale in New Mexico. 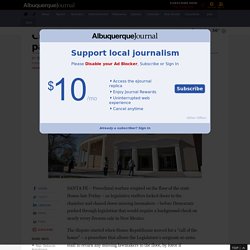 The dispute started when House Republicans moved for a “call of the house” – a procedure that allows the Legislature’s sergeant-at-arms staff to return any missing lawmakers to the floor, by force if necessary, for a vote. But at least one Republican, David Gallegos of Eunice, was absent and didn’t return to the floor within 15 minutes.

The House couldn’t move forward with debate on the gun legislation until every member, except those excused, were returned to the floor. House Speaker Brian Egolf, D-Santa Fe, accused Republicans of stalling and playing games. Democrats had returned to the House for the call, he said, but it was a Republican who was missing. What is it like to shoot someone? "Behind the Bullet" explores "moral injury" of gun violence. “Behind the Bullet,” a striking new documentary, is having its world premiere at the Slamdance Film Festival this weekend. 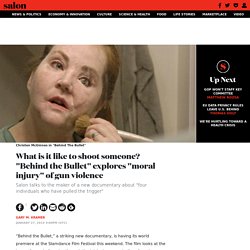 The film looks at the issue of guns in America through the intriguing case studies of, as the documentary's website says, "four individuals who have pulled the trigger. " Christen McGinnes is the victim of a gunshot wound that destroyed her face. She has had more than 40 surgeries to repair the damage and continues to receive treatment. Will Little is a barber in Philadelphia who spent ten years in prison for murder. He now educates youth and adults about guns and the dangers of violence. 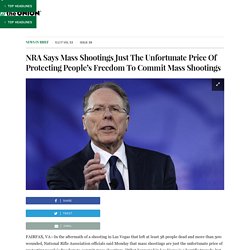 “What happened in Las Vegas is a horrific tragedy, but it’s sadly the inevitable cost of safeguarding the rights of Americans to perpetrate such horrific tragedies,” said NRA executive vice president Wayne LaPierre, adding that defending the constitutional right to commit mass murder meant accepting that mass murders were occasionally going to happen. “As saddened as we are today, we must always remember that preserving our sacred liberty to go on violent rampages is far more important than any one violent rampage.” Passing Driver Fatally Shoots Gunman Attacking Arizona State Trooper. When NRA Calls the Shots: Reasonable Killing of a Boy - Rolling Stone. Florida man convicted in road rage death shot and killed after new roadside confrontation.

Instrument Of Terror. Until the deadly shooting of 14 people in San Bernardino, California, last year by a married couple with a history of privately expressing support for Muslim terrorist groups, most fears of terrorism on U.S. soil had centered on the potential for plane hijackings or biological or chemical weapons. 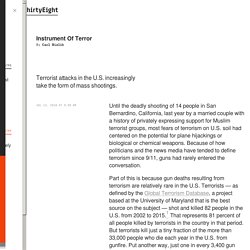 Because of how politicians and the news media have tended to define terrorism since 9/11, guns had rarely entered the conversation. Part of this is because gun deaths resulting from terrorism are relatively rare in the U.S. Terrorists — as defined by the Global Terrorism Database, a project based at the University of Maryland that is the best source on the subject — shot and killed 82 people in the U.S. from 2002 to 2015. Gun Deaths In America. Methodology The data in this interactive graphic comes primarily from the Centers for Disease Control and Prevention’s Multiple Cause of Death database, which is derived from death certificates from all 50 states and the District of Columbia and is widely considered the most comprehensive estimate of firearm deaths.

In keeping with the CDC’s practice, deaths of non-U.S. residents that take place in the U.S. Watch the Dallas police chief obliterate the myth of ‘a good guy with a gun stopping a bad guy with a gun’ At a press conference on Monday, Dallas Police Chief David Brown shot down one of the NRA’s most cherished myths that claims that the only thing that stops a bad guy with a gun is a good guy with a gun. According to Media Matters, Brown was taking questions when he was asked about open carry at the event where five police officers lost their lives last Thursday night.

“We know that there was at least one gentleman who was a subject — person of interest, during the demonstration he had an AR-15 around his — around his shoulder,” he was asked. US Law Enforcement Knew Florida Shooter BEFORE Shooting. Oklahoma schools post warnings of armed staff who will ‘use whatever force is necessary’ The Daily Show tests if a "good guy with a gun" can stop a mass shooting.

It has been said millions of times after a mass shooting: The only way to stop a bad guy with a gun is a good guy with a gun. On Thursday, The Daily Show's Jordan Klepper put the theory to the test. He trained on the basics of using a firearm and got a concealed carry permit that's valid in 30 states. Then he participated in mass shooting simulations to see how, exactly, he would hold up in such a scenario. WATCH: SNL mocks America’s love affair with guns in brutal ad that only the NRA could love.

Don't miss stories. Follow Raw Story! On Saturday Night Live, the cast and writers took on America’s love affair with guns in a warm and fuzzy ad that the NRA might have produced — but without the self-awareness of how crazy it is In the ad we see various moments in people’s lives — first love, the birth of a child, inter-generational connections — made better by the introduction of a gun. We’re now averaging more than one mass shooting per day in 2015. Aug. 26 is the 238th day of the year. 4-Year-Old Girl Dies After Shooting Herself With Found Gun. Road-raging Michigan man guns down married dad picking up kids from first day of school.

By Travis GettysFriday, September 5, 2014 7:42 EDT A Michigan man and his wife had just eaten lunch Tuesday afternoon and were on their way to pick up their children from the first day of school when they were cut off by a speeding pickup truck. Police said 43-year-old Derek Flemming got out of his SUV at the next stoplight, approached the Dodge pickup, and asked the driver: “What’s your problem?” The other driver then rolled down his window and shot Flemming in the face, killing him, police said. Police took 69-year-old Martin Zale into custody after the shooting, and prosecutors waited two days to charge him with open murder, two counts of felony firearms, and discharge of a weapon from a vehicle. Michigan law does not require prosecutors to choose between first- or second-degree murder, even at trial, and a jury may determine the appropriate charge based on the evidence. A Famous Gun Owner Was Invited To Speak To A Roomful Of D.C. Elites. He Owned It.

Utah woman accidentally shoots family member driving to pawn shop to sell gun. By David EdwardsTuesday, August 26, 2014 8:32 EDT. German gun designer’s quest for a smarter weapon infuriates U.S. gun rights advocates. Brain scientist arrested for pointing AR-15 at women during open-carry display at Phoenix airport. Man Shoots Teen Girl After She Asks Him to Stop Riding Lawnmower In Her Yard. Michigan woman pulls shotgun to ‘make a point’ and shoots self in face. Who gets shot in America: What I learned compiling records of carnage for the New York Times. By Jennifer MasciaTuesday, July 15, 2014 7:00 EDT A year and a half ago, after the massacre at Sandy Hook Elementary School in Newtown, Conn., Joe Nocera, an Op-Ed columnist at the New York Times, asked me, an editorial assistant at the newspaper, to find out who gets shot in America every day.

Waitresses Carry Guns At Aptly Named Restaurant In Aptly Named Town. RIFLE, Colo. (AP) — Many stores and restaurants are telling people not to bring their guns inside, but one western Colorado restaurant not only embraces the practice of packing heat, it encourages its customers to carry openly — and its waitresses do, too. As she takes your order at Shooters Grill in the town of Rifle — yes, Rifle — waitress Ashlee Saenz carries a pad, pen and a loaded Ruger .357 Blackhawk revolver holstered on her leg, Old West style. It's loaded, and she knows how to use it.

Colorado is among the states where openly carrying a gun in public is legal. The issue has made headlines after gun rights activists carrying loaded rifles gathered in Target stores in Texas, Alabama and North Carolina to demonstrate their support of "open carry" laws. But in Rifle, Saenz, her co-workers and her customers at Shooters Grill are encouraged to bring their holstered guns in the restaurant, The Glenwood Springs Post Independent reports ( ).